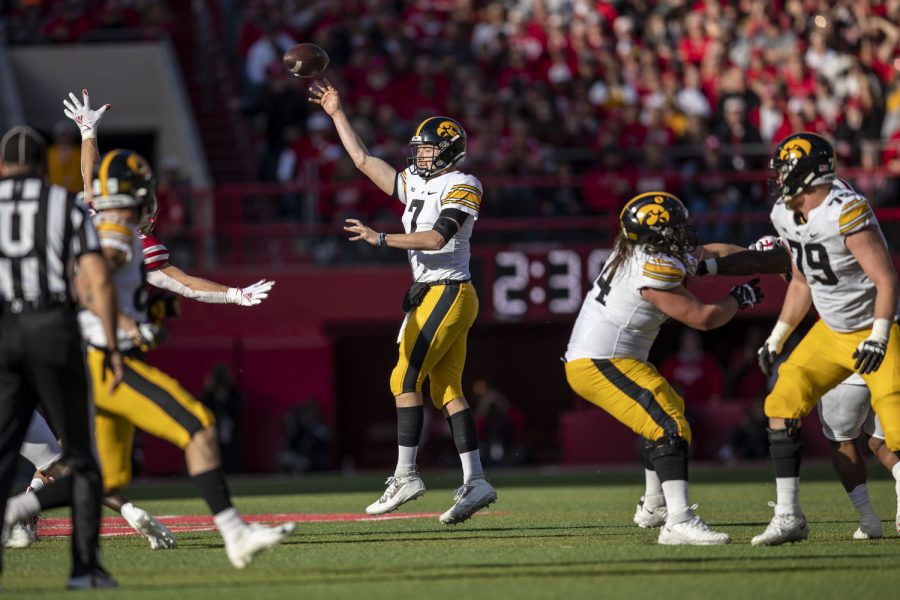 Iowa quarterback Spencer Petras throws a pass during a football game between No. 16 Iowa and Nebraska at Memorial Stadium in Lincoln, Nebraska, on Friday, Nov. 26, 2021. Petras replaced quarterback Alex Padilla at the start of third quarter. The Hawkeyes defeated the Corn Huskers 28-21.

Point/Counterpoint | Who should Iowa football start at quarterback?

The 6-foot-1 hurler from Greenwood Village, Colorado, won three games under center this season. Yes, he only played part of Iowa’s 17-12 win over Northwestern, but I’m still giving him credit for that victory because the Hawkeyes’ offense looked anemic before he came in the game.

On the season, Padilla has completed 45 of his 97 pass attempts for 598 yards, two touchdowns, and one interception. He’s also scored once as a runner this year.

When Padilla was benched in favor of junior QB Spencer Petras against Nebraska last Friday, he hadn’t played poorly by any stretch. He went 6-of-14 for 76 yards in the first half versus the Cornhuskers. He even had a passing touchdown to tight end Sam LaPorta taken away by official replay.

First, that touchdown to LaPorta should’ve counted. Second, if that pass was ruled complete by the referees, Padilla and the Hawkeyes’ largest deficit would’ve been 21-13, not 21-6.

Had that touchdown counted, Padilla probably wouldn’t have been benched.

If the Hawkeyes want to play their best football this Saturday in Indianapolis, they need Padilla to start at quarterback.

When he’s on the field, Iowa’s offense is much more diverse and threatening. Iowa can run the option, move the pocket, and have its quarterback roll out when Padilla is in the game.

The Hawkeyes struggle to do those things when Petras is on the field. He’s not a mobile quarterback, so he can’t move or do things quite like Padilla does.

Petras also can’t scramble out of sacks like Padilla. Iowa’s offensive line has given the second-most sacks of any Big Ten team this season with 31.

If Petras is starting at quarterback Saturday, the Hawkeyes may have to deal with many plays that go for negative yardage because No. 7 might get sacked a lot. Michigan racked up the third-most sacks of any Big Ten team during the regular season.

If Padilla starts at quarterback, I think Iowa will win Saturday. If not, Dec. 4 could be a tough day for Hawkeye fans.

So, we already know who is going to start at quarterback for Iowa against Michigan in the Big Ten Championship Game this weekend. And, believe it or not, I think head coach Kirk Ferentz and company made the right choice by giving Spencer Petras the keys to the offense in the biggest game Iowa has played in since 2015.

Alex Padilla certainly provided a spark when he entered the Northwestern game when Petras’ shoulder was noticeably not 100 percent. Padilla was moving out of the pocket and providing his playmakers an opportunity to make plays in single coverage.

For whatever reason, that spark seems to have fizzled out.

In his three starts, Padilla completed only 23-of-55 passes. Yes, there was an electric 72-yard touchdown to Charlie Jones against Minnesota. But there have been questionable moments, too. Against Nebraska, several of his passes were off target and went through the hands of Cornhusker defenders. There’s also the off-target pass to Sam LaPorta in the end zone on fourth down that resulted in a LaPorta drop.

I was fully in favor of Ferentz giving Padilla a chance to start against Minnesota, and again against Illinois. But now, heading into the conference title game, I think it’s time to go back to Petras, at least for now. Petras looked better in the second half against Nebraska, when he replaced Padilla, than he has for most of his Iowa career. A third-and-14 throw to Nico Ragaini that picked up 24 yards was particularly impressive.

Look, I think it’s pretty close between Padilla and Petras. But Padilla completing under 50 percent of his passes isn’t going to get it done against a defense as good as Michigan. Petras has 17 games’ worth of experience as a starter and looked better against Nebraska than Padilla did.

Iowa is right to ride the hot hand and go with Petras. And I guess, if they are wrong, another halftime change at quarterback might do the trick again.