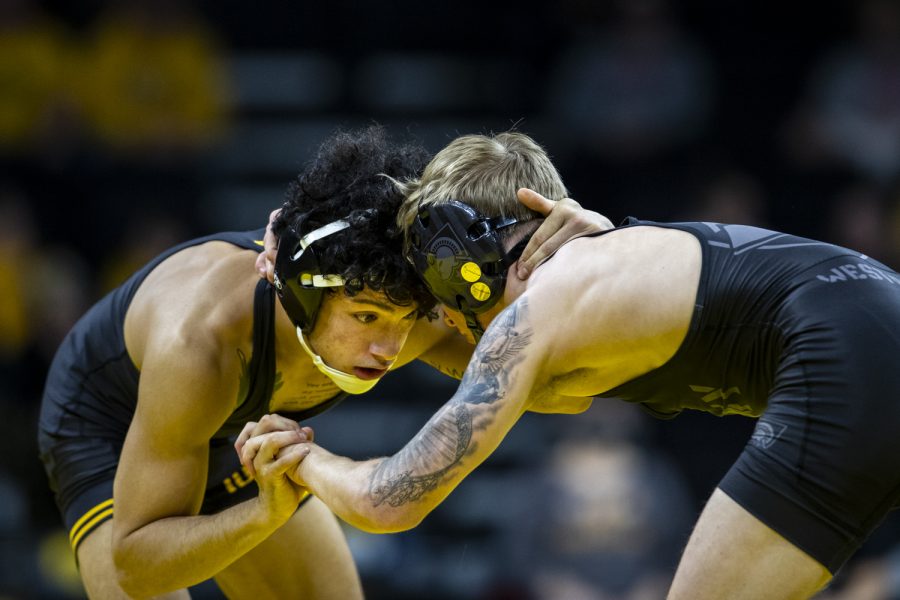 Iowa’s 125-pound Jesse Ybarra grapples with Amry’s 125-pound Ryan Chauvin during a wrestling meet between No. 1 Iowa and Army at Carver-Hawkeye Arena in Iowa City on Sunday, Nov. 28, 2021. Ybarra defeated Chauvin 3-1 with a take down in sudden victory.The Hawkeyes defeated the Black Knights 36-7.

Redshirt freshman Jesse Ybarra thought he was going to start his first-ever dual meet as a Hawkeye on Nov. 19. Iowa was taking on Princeton.

So, Ybarra had to wait another week to get his first start in the Black and Gold.

On Nov. 28, Ybarra finally got his chance to hit the mat in front of a large contingent of Iowa fans at Carver-Hawkeye Arena. The 5-foot-5 underclassman defeated Army’s Ryan Chauvin, 3-1, in sudden victory, sparking the Hawkeyes’ 36-7 victory over the Black Knights.

Neither Ybarra nor Chauvin scored in the first period. The pair then traded escapes in the second and third stanzas to force overtime.

With 23 seconds left in the sudden victory frame, Ybarra earned a takedown to win the match.

While Ybarra did pick up a win, he and Iowa head coach Tom Brands admitted Sunday’s outing was far from perfect.

“I just realized a little too late that I should’ve opened up [my offense] a lot sooner,” Ybarra said.

“Let it fly,” Brands said. “You know, there were a couple of shots where he was hesitant on his attack and looked like he might get himself in a little trouble. And then, when he went, he gave himself a couple opportunities . . . Don’t wait so long.

Ybarra told reporters that the “Let it fly” mentality was on full display Sunday with Hawkeye veterans like top-ranked 165-pounder Alex Marinelli and No. 2 141-pounder Jaydin Eierman each securing falls against the Black Knights.

“Really, today I picked up a lot of ‘Let it fly,’” Ybarra said. “Don’t hesitate on certain things. I see guys like Jaydin and Alex  just going anytime they see an opportunity, and I think I lack experience opening up when it comes to my offense. Like, I’ll see something open, and I kind of get a little hesitant with guys like Jaydin and Alex. It’s not like that. It’s just go, go, go.”

“I told Ybarra that, the moment you think about it, you’ve got to go before you even think the takedown is going to be there,” Marinelli added in a joint press conference with Ybarra. “So, that’s something that we talked about. It’s kind of funny you brought that up, gives him more time to reflect on it.”

Marinelli tallied four takedowns in the first two periods of his bout Sunday before pinning Army’s Christian Hunt in the third frame.

The Hawkeyes’ next dual will come in Ames. Iowa will battle Iowa State at Hilton Coliseum at 6 p.m. Dec. 5.