Students shared their experiences and frustrations that came with reporting incidents of sexual misconduct and violence to the University of Iowa. 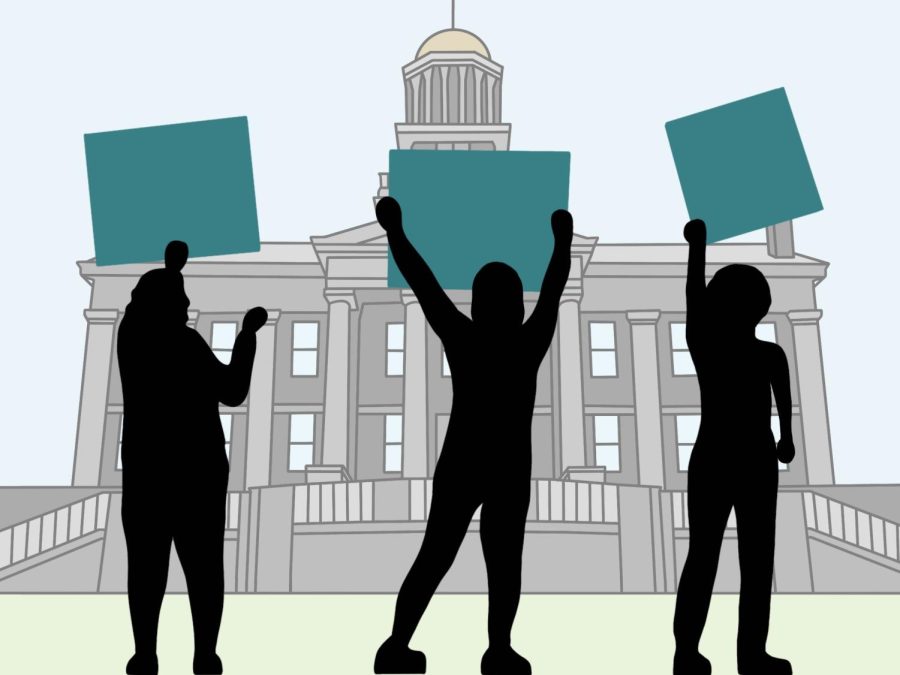 Illustration of people holding up posters in protest in front of the University of Iowa Old Capitol Building. Designed by Molly Milder.

Editor’s Note: This article makes brief mention of several instances of sexual misconduct and harassment. Because several sources feared retribution, The Daily Iowan granted anonymity to sources who requested it within this article. To protect identities, the DI has assigned several pseudonyms.

Amanda didn’t initially want to report her alleged sexual assault to the University of Iowa.

One year after it happened, however, she filed a formal complaint to the UI Title IX and Gender Equity Unit. When The Daily Iowan asked Amanda to describe what she felt the reporting process was like, she closed her eyes and took a breath. A moment of silence lingered in the air as she selected her next words.

Two out of three sexual assault survivors do not report the assault to police. The reasons vary — some fear retaliation, others believe no one will help.

As Amanda engaged in the reporting process, she, too, felt helpless.

Amanda and four other UI students who spoke to the DI are part of the 13 percent of students who report experiencing sexual assault and violence during their college career in the U.S. Rates across the country of nonconsensual sexual contact increased for both undergraduate men and women from 2015 to 2019 — 1.4 percentage points for men and 3 percentage points for women.

Much of the UI community reeled earlier this year after learning about a sexual assault allegation against two former members of the Phi Gamma Delta Fraternity, commonly known as FIJI, which spurred three consecutive days of protests on campus.

The alleged victim, Makéna Solberg, filed a lawsuit against the members on Oct. 26.

Amanda said she decided to report because the alleged assailant — also a UI student —would call, text, and attempt to get close to her when they were in the same program space after the night of her alleged assault.

As time went on, Amanda said she distanced herself from program events to avoid being in the same space.

After the program director expressed concern that Amanda had become withdrawn from the program events and encouraged her to report the alleged sexual assault, she filed a formal complaint to the Title IX and Gender Equity Unit.

Amanda said she first met with the investigator to tell her side of the alleged assault. After the meeting, she said she received notice that the investigation needed to be postponed for medical reasons cited by the respondent — the label given to the party that the formal complaint is made against.

When she was called in by the Title IX and Gender Equity Unit to have the outcome of the investigation, Amanda’s heart dropped. She said the investigator had found no policy violation and decided the case to be a “regretted sexual encounter,” meaning that the investigator believed that she had consented to engage in sexual activity, but regretted it afterward.

“The takeaway from the report was that I was a cocktease that got what was coming toward them,” Amanda said. “‘I played with fire, and I had sex that I didn’t want ultimately and that it’s my fault,’ that’s how the report read.”

Amanda said she not only felt shocked by the outcome, but also by how the investigator interpreted the report. In the report, both Amanda and the respondent said she had said “no” and “stop” during the sexual encounter.

According to the UI definition of consent, “Consent can also be withdrawn once given, as long as the withdrawal is reasonably communicated that, if there is confusion as to whether anyone has consented or continues to consent to sexual activity, the participants must stop the activity until each consents to it.”

Per university policy, the exact text of the report was unable to be shared with the DI.

Additionally, in the section about credibility, Amanda said the report stated that both parties were credible. She said that from her perspective, the respondent lied about some details that the investigator didn’t look into. For example, the respondent stated that their roommate was out of town the night of the alleged assault, however, Amanda claimed the respondent didn’t have a roommate at the time.

Meanwhile, she felt “hammered” with questions, including, “Were you asking for it?” and “Are you in the habit of texting men at night?”

After the investigation, Amanda said she regretted buying into what she called “propaganda” that the UI cares about issues such as sexual misconduct and violence.

“This really messed with my head for a long time when I realized not a single person was in my corner,” Amanda said.