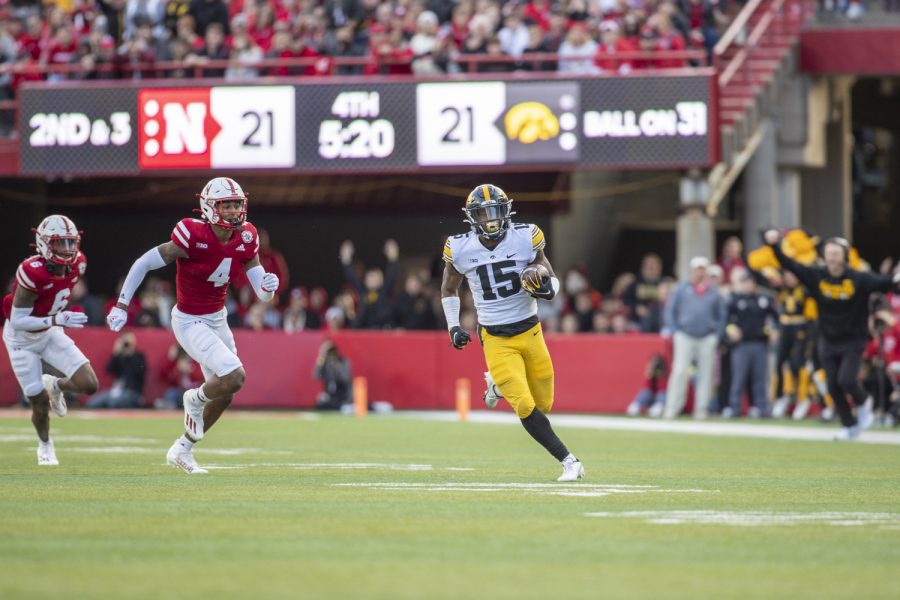 Iowa running back Tyler Goodson finds running room during a football game between No. 16 Iowa and Nebraska at Memorial Stadium in Lincoln, Nebraska, on Friday, Nov. 26, 2021. Goodson’s longest carry went for 55 yards. The Hawkeyes defeated the Cornhuskers 28-21.

Iowa football is heading to the Big Ten Championship Game.

And for the Hawkeyes, it was a winding road to get there.

“Certainly, it’s been a special season for us and this is a really special team,” head coach Kirk Ferentz said on a Zoom call with reporters Sunday. “ … One thing about this team, it’s clearly a group of players and coaches that really like each other, they trust each other. And they’ve worked through adversity together. So, it’s been really fun to be part of this.”

Iowa started the season with back-to-back ranked wins over then-No. 17 Indiana and then-No. 9 Iowa State. Following the matchups, both Indiana and Iowa State suffered losing streaks and fell out of the AP Top 25. The Hawkeyes improved to 5-0 and No. 3 in the nation before its highly anticipated, top-five matchup with then-No. 4 Penn State on Oct. 9. Iowa completed a fourth-quarter rally to take down the Nittany Lions, 23-20, and rocket to No. 2 in the nation.

But, after their biggest win since 1985, the Hawkeyes tumbled.

Iowa suffered back-to-back losses to unranked Purdue and Wisconsin on Oct. 16 and Oct. 30, respectively, falling as low as No. 19 in the AP Poll. Hawkeye starting quarterback Spencer Petras also injured his shoulder in the loss to Wisconsin.

Sitting at 6-2, the Hawkeye coaching staff decided to make a change under center.

Petras started the Hawkeyes’ next game against Northwestern, but only completed three drives before backup QB Alex Padilla finished the contest, leading Iowa to a 17-12 victory in Evanston.

Padilla started the Hawkeyes’ next three games against Minnesota, Illinois, and Nebraska, with Petras watching from the sidelines. Petras said his shoulder was 100 percent and he was ready to go against Illinois but backed up Padilla against the Fighting Illini.

“He was really supportive,” Padilla said of Petras following the Minnesota victory on Nov. 13. “He was giving me a whole bunch of tips. You know, having an experienced starter who can see stuff from the sidelines was really helpful. He suggested a lot of great plays for us. I’m super thankful for him. He helped me all the way.”

Padilla started against Nebraska in Lincoln on Black Friday but didn’t finish. Petras took his first snaps since Nov. 6 when he relieved Padilla in the second half, leading the Hawkeyes to their 10th victory of the season.

On Sunday, Ferentz declined to comment on whether Petras or Padilla will start the Big Ten Championship Game.

“Really, overall, been pleased with both guys,” Ferentz said. “I think both of them have really performed well during the course of the year. I’ve seen improvement from both guys. And, you know, we go into this week feeling good about our situation there.”

Going into Week 13 of the college football season, Iowa’s fate was in Wisconsin’s hands. Two things needed to happen for Iowa to win the Big Ten West outright: A Hawkeye victory over Nebraska, and a Wisconsin loss to Minnesota.

Iowa rallied from a 21-6 deficit to beat Nebraska, 28-21, on Friday. While the Hawkeyes watched from Iowa City, unranked Minnesota took down Wisconsin, 23-13.

Now, the Hawkeyes will take on Michigan in the Big Ten Championship Game on Dec. 4 at 7 p.m. The game will take place in Lucas Oil Stadium in Indianapolis.

“It seems like every time we go to a bowl game or a game like this, we’re underdogs,” Ferentz said. “So, we’re a little bit used to that. And one thing I tell our team every August is that every season is going to bring its own set of challenges. It’s going to have opportunity, but also it’s set of challenges.”

This is Iowa’s second appearance in the Big Ten title game as the Hawkeyes were Big Ten West champions in 2015. Iowa lost to Michigan State in the conference championship game that year.

“I feel like we earned it,” junior center Tyler Linderbaum said. “We played our hearts out this entire year, and we’re a resilient team. We never quit.”

Michigan will record its first-ever appearance in the conference championship game since its inception in 2011. The Wolverines are 11-1 on the season, with their only loss coming to Michigan State.

“This is the championship game, this week,” head coach Jim Harbaugh said. “We’re playing against a great Iowa team in Indianapolis. And this week, it’s for all the marbles.”