The Hawkeyes have won their first six games of the 2021-22 season. 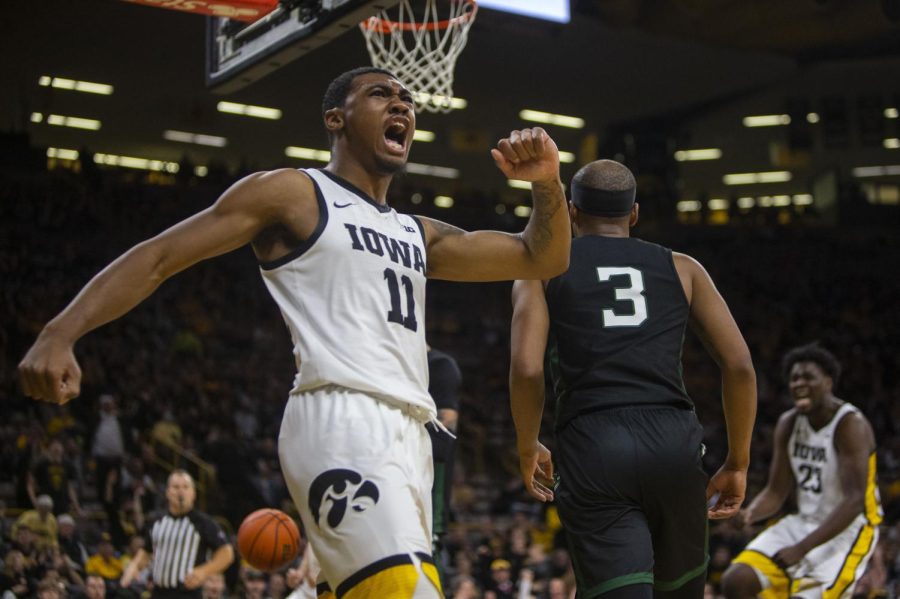 The Hawkeyes shot 36.4 percent from the field in the first half. Iowa head coach Fran McCaffery said his team took four bad shots in the game’s first 20 minutes. The Hawkeyes also turned the ball over nine times.

In the second half, the Hawkeyes tallied 54 points — 14 of which came from sophomore forward Patrick McCaffery.

“I thought, in the second half, our ball movement, our shot selection was just infinitely better,” Fran McCaffery said of his team’s 60.6 second-half shooting percentage.

Patrick McCaffery scored all 14 of his points in the second half Friday. He missed the Hawkeyes’ Nov. 16 game against the Western Michigan Broncos with a lower body injury.

“I think it was about getting my legs back,” Patrick McCaffery said. “Took about a half to get the rust off, got a bucket early second half, that always helps. Then, just my teammates kept giving me confidence to go try to score, and that’s what I do. So, that’s what I did.”

Kris Murray, another one of Iowa’s sophomore forwards, played well in both halves Friday. He scored 13 points on the game.

Murray shot 2-of-6 from the field early in the contest. Then, he rallied, hitting his last three field goal attempts.

“I missed a couple shots that I usually make around the rim in the first half,” Murray said. “In the second half, I just picked and chose my ready to go to the basket, besides the one where I kind of shot it over my head. The 3-point shot, I’m really confident in that right now. I’m shooting it pretty good this year, but I just need to keep being aggressive and the shots will fall.”

Murray’s twin brother, Keegan, led the Hawkeyes in scoring against the Vikings. The 6-foot-8 Iowan dopped 23 points. He scored 21 in the first half alone.

Iowa has opened its 2021-22 campaign with a whopping six consecutive victories at Carver-Hawkeye Arena.

Keegan Murry currently leads the Big Ten in scoring at 25.7 points per game.

The Hawkeyes have held their last two opponents to 61 points or fewer. Iowa has won 87 of the last 89 games it’s played against foes that score 61 or fewer.

A Portland State defender decided to take a swipe at the ball at the end of Friday’s game while Iowa senior Austin Ash was trying to dribble the clock out.

The Hawkeyes were up 85-51 when the Viking defender tried to steal the ball.

While Ash did maintain possession of the basketball, Iowa refused to shake hands with Portland State before it headed to the locker room postgame.

Tipoff between Iowa and Virginia is scheduled for 6 p.m. The game will air live on ESPN2.