The Hawkeye tacked on a field goal at the end of the first half to make it a one-possession game at halftime. 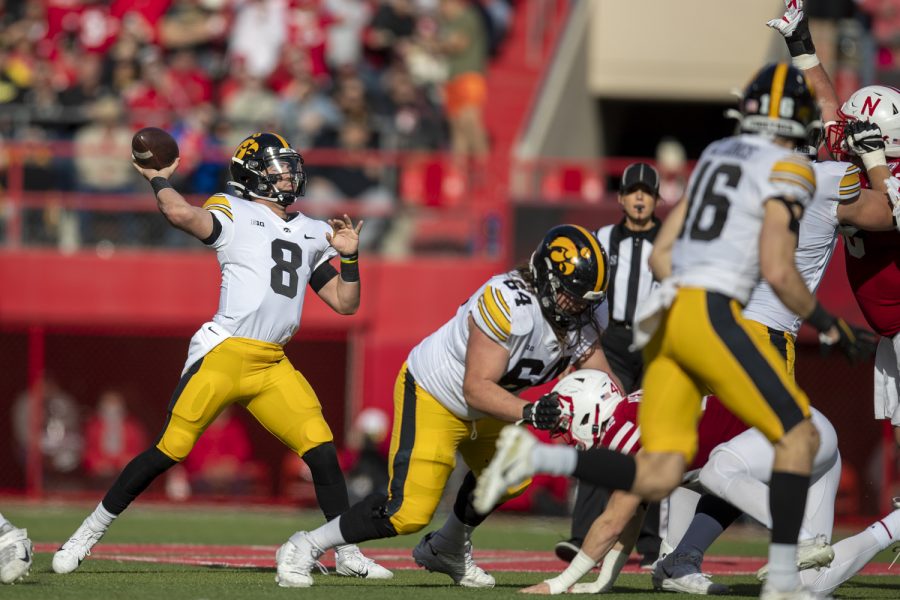 Iowa quarterback Alex Padilla releases a pass during a football game between No. 16 Iowa and Nebraska at Memorial Stadium in Lincoln, Nebraska, on Friday, Nov. 26, 2021.(Jerod Ringwald/The Daily Iowan)

LINCOLN, Neb. — The No. 16 Iowa football team trails Nebraska, 14-6, at halftime of the Black Friday matchup between the two rivals at Memorial Stadium.

The Huskers marched 75 yards on an opening touchdown drive. The Hawkeyes went right down the field on their first drive of the game, too, but didn’t come away with any points. On fourth down and goal at Nebraska’s 1-yard line, tight end Sam LaPorta appeared to catch a touchdown off of play-action, but the play was reviewed. The call on the field was overturned, and Iowa came away with no points. Iowa has settled for field goals twice in the first half after promising drives, while Nebraska has found the end zone twice against the Hawkeyes’ defense.

Daily Iowan Pregame Editor Robert Read and Assistant Sports Editor Chloe Peterson are covering the game in Lincoln. Here are their reactions to the first half.

The Hawkeyes crossed the Husker 40-yard line on all four of their first-half offensive possession. That’s good. Despite consistently moving the ball, Iowa didn’t score a touchdown in the first half. That’s bad.

Offensive coordinator Brian Ferentz is actually calling a pretty good game today. There has been lots of play action, including a 30-yard pass to LaPorta on the first Iowa drive of the game. Running lanes have also been open through the first two quarters of the game. Running back Tyler Goodson has averaged 6.3 yards per carry and surpassed 1,000 yards on the season in the first half. Still, Iowa has only six points to show for its 135 first-half yards.

Caleb Shudak has been clutch, nailing kicks from 51 and 48-yards out.

You can’t blame Iowa for the overturned LaPorta touchdown. That should have remained a catch. There was also that weird illegal formation penalty on third down that was called after the play ended. Iowa settled for a field goal on that drive. Maybe this isn’t all Iowa’s fault? A Nebraska defender did slap a referee and not get ejected, after all.

This is only an eight-point game, and Nebraska has a history of losing close games. But Iowa is going to need to find the end zone rather than the uprights to go out on top in this one.

Iowa didn’t have a lot of film on Husker backup quarterback Logan Smothers.

Before he was named Nebraska’s starting quarterback on Monday, the freshman had only played in garbage time in 2021.

Four-year Husker starter Adrian Martinez, a quarterback that tends to stay in the pocket, went down with a shoulder injury — forcing Smothers into the limelight.

And so far, Smothers has performed well.

The Husker quarterback only attempted five passes in the first half and converted all of them for 58 yards and a 197.4 passer rating.

But evidently, where Smothers has really shined is in the run game.

Martinez, the quarterback the Hawkeyes have faced the past three years, was not as mobile on the field. Martinez relied on his wide receivers and running backs instead of his own legs.

The Hawkeye defense’s inability to read Smothers’ options has allowed him to lead all players, Hawkeye or Husker, in rushing yards in the first half.

The freshman has kept Iowa’s defense off balance for the first 30 minutes of the contest with 14 rush attempts for 64 yards and a touchdown. Smothers’ longest run has been 24 yards

Hawkeye junior running back Tyler Goodson has 63 rushing yards in the first half, with his longest run coming in at 12 yards.

Smothers’ ability to use his legs has majorly thrown the Hawkeye defense off, as it has allowed 14 points in the first half. Will Iowa learn to defend Smothers and his self-sustained run game? We’ll have to wait and see.