Sophomore Cobe Siebrecht picked up a win via technical fall in his first-ever collegiate dual start. 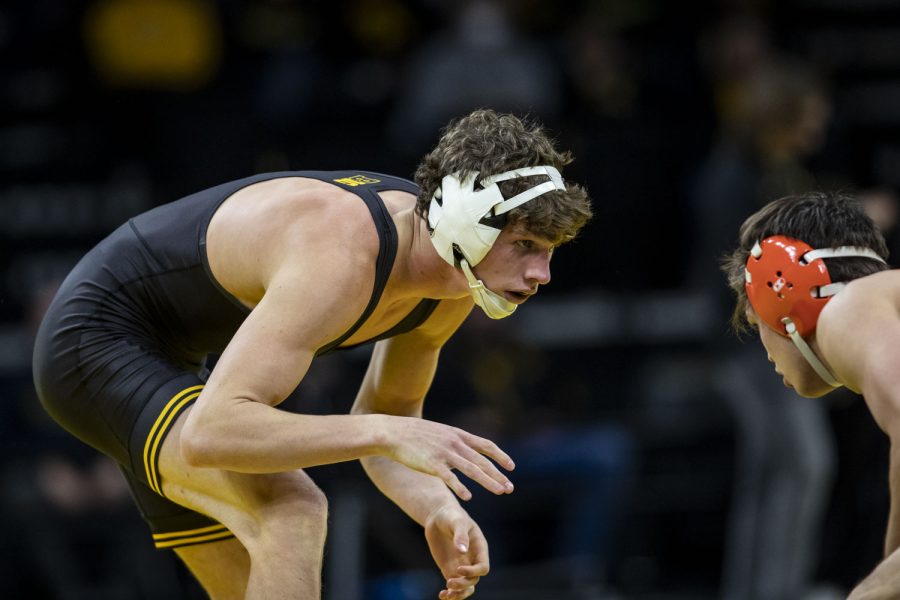 Iowa’s 149-pound Cobe Siebrecht works for inside control against Princeton’s Josh Breeding during a season opener dual wrestling meet between No. 1 Iowa and No. 21 Princeton at Carver-Hawkeye Arena on Friday, Nov. 19, 2021. Siebrecht won by tech fall 16-1. The Hawkeyes defeated the Tigers with a team score of 32-12.

Cobe Siebrecht grew up about 25 miles from Carver-Hawkeye Arena, graduating from high school in Lisbon, Iowa.

“I wasn’t really thinking much on it,” Siebrecht said of his first collegiate dual start. “Then I went to the Luther Open. I was only supposed to wrestle a match at the Luther Open, you know, coming back from stuff in the past. So, I ended up kinda wrestling through the whole tournament. And then I was like, ‘I’m ready. I’m ready to go.’

“I just stayed ready,” Siebrecht added. “So, I was ready, rather if I was going to go or if I wasn’t going to go. In my mind, I was going. So, I’m just always staying ready.”

The wrestler that occupied Iowa’s 149-pound spot in 2021-22 showed up to Carver in street clothes Friday. Senior Max Murin was in jeans and t-shirt throughout the Hawkeyes’ match with the Tigers. The Pennsylvanian wasn’t listed on Iowa’s probable lineup sheet pre-dual, either.

With Murin’s status unclear, Brands didn’t rule out future starts for Siebrecht or any of the Hawkeyes’ other 149-pound wrestlers.

“There’s three guys there that are capable,” Brands said post-match. “There’s depth, and we’ll see where it goes. We certainly like what we see.”

Murin wasn’t the only returning starter that didn’t wrestle for the Hawkeyes Friday. Seniors Spencer Lee, Michael Kemerer, and Jacob Warner all did not compete against Princeton.

Nelson Brands competed at 184 pounds for Iowa in 2020-21. The Iowan was a 165-pounder during his first season with the Hawkeyes.

“Well, I mean, here’s the thing,” Tom Brands said. “We got a lot of wrestling to do, and I know that everybody wants our best lineup. And that might’ve been our best lineup, but I’m a patient guy.

“As far as our lineup, that might be our best lineup,” Brands added. “We have a lot of options. We like our personnel. I am confident that we are gonna get better as we go forward. So, that’s where I’m at.”

Brands said he solely controls Iowa’s lineup and the decisions the Hawkeyes make at each weight. He’s also comfortable with a variety of lineup combinations he could use at any given time.