Students of the Iowa City Community School District gathered at the University of Iowa Pentacrest to address problems facing Black students in their schools. The protestors gave speeches before marching and chanting in the streets. 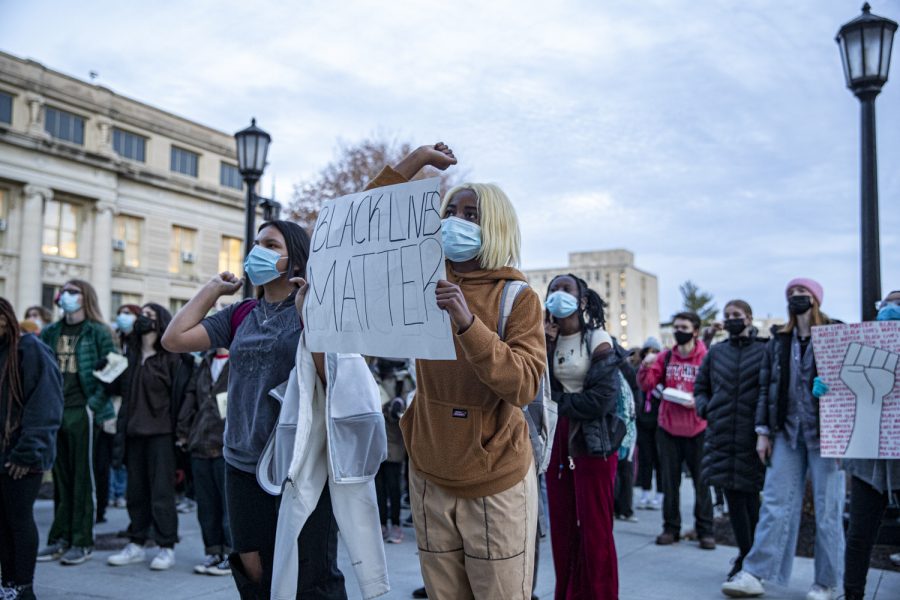 Students cheer in support during a protest against racial discrimination throughout the Iowa City Public School District in Iowa City on Friday, Nov. 19, 2021.

Iowa City Community School District students and members of the Iowa Freedom Riders gathered on the Pentacrest for better recognition of the problems facing students of color in the district after a video of an Iowa City West High School student saying a racial slur circulated.

As previously reported by The Daily Iowan, students, teachers, and community members also addressed the issue at an Iowa City Community School District meeting on Nov. 9.

About 100 people marched on the sidewalk down Clinton Street, Washington Street, Linn Street, and Burlington Street before coming back to the Pentacrest, where students from various Iowa City schools told personal stories about their experiences.

The protesters chanted, “Say it out loud, I’m Black and I’m proud,” “No justice, no peace,” and “Black lives matter,” as they marched with signs.

Denim Moore, a West High School student, said he was present because of the lack of equality at his school, and that the school’s principal has not dealt with the problem well.

“I just feel like my main problem is him not owning up to it,” he said. “The person that made the video was saying a lot of racist things that made everyone unsafe and uncomfortable.”

Before the march, students from the Iowa City Black Student Union expressed their concerns for Black high school students in Iowa City, whom they claim have faced too much discrimination. They said they wanted to give Black students a voice for this reason and because their school faculties have not addressed the problems, but did not mention the video in particular.

“As a Black person, I am tired of thinking if I will be next or if I am going to die the next day or if any other family members will,” Moore said on the steps of the Old Capitol.

“I am here to get out the whole Black Lives Matter thing to people who honestly don’t get it and honestly just to be heard really,” she said.

Jordan Hills, an Iowa City High School student, said there has been a lot of unnecessary violence in the district.

“It keeps happening again and again and nothing is done about it,” Hills said.

Stephany Hoffelt, an organizer for the Iowa City Mutual Aid Collective, said she joined the protest to show support because she thinks it is important for adult members of the community to report to elected officials about the students’ concerns.

She said students have had a difficult time being heard in the past, despite peacefully protesting.

“They put together all of this money for this kind of thing after the protests last summer and none of it has been spent,” she said. “Creating support, organizations, and doing outreach to help these kids seems like the perfect use for that money, and it just kind of sits there.”