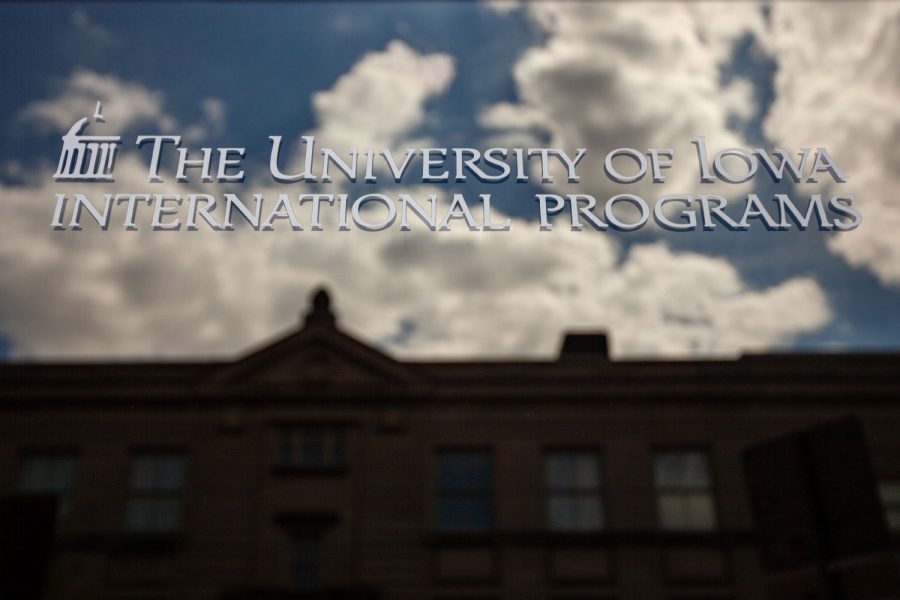 The outside of the University of Iowa International Programs office as seen on Tuesday, May 4, 2021.

The number of international students enrolled at the University of Iowa has dropped consistently over the past five years, a trend that is evident across all of the U.S.

International student enrollment dropped 9.6 percent at the UI from fall of 2020 to fall 2021.

The international student enrollment numbers at the state Board of Regent universities have dropped by 49 percent in the past six years.

Russell Ganim, associate provost and dean of international programs, said that the department is working to increase enrollment by recruiting from countries other than China.

“We need to focus on other parts of the world. We’re intensifying recruiting efforts in Africa, focusing on Ghana, Kenya, Nigeria, and Tanzania,” he said. “Malaysia is another country that we are taking a serious look at because we’ve got existing partnerships there and we’ve done virtual recruitment, fairs, and events with partner institutions in Malaysia.”

Ganim said international programs is also looking to do in-person recruiting at countries in the Middle East, in particular the United Arab Emirates, Qatar, and Oman.

“India is a country that merits serious consideration,” he said. ‘We’ve been working with alumni to boost international student recruitment, and then we may start revamping our efforts in Brazil within the next six to nine months.”

Ganim said he thinks one factor that could be impacting the enrollment numbers is increased competition for students.

“At one point we were getting probably 80 percent of our international students from China,” Ganim said. “The Chinese have built a lot of universities to keep their students at home. There’s increased competition from countries like Canada, the UK, Australia, there are just more and more options there.”

He added that financial aid packages, the UI’s rankings, and COVID-19 have played a part in the decrease in international student enrollment.

“During the pandemic, health and safety is definitely on the minds of international students, both physical health and mental health,” Lin said. “COVID policy is really different across the world, so depending on where the students come from and their comfort level, they might struggle with the policy here in the U.S.”

Lin said she has heard from students that their mental health is worsening, as many have not been able to visit their families. She has also seen international students struggling with increased financial burdens, especially as the COVID-19 pandemic has affected the finances in their home countries.

She said she thinks a big reason for the low enrollment numbers is the reputation of the U.S. regarding international students.

She added that she thinks things are becoming better now, but the UI is still seeing some of the effects of both the hostile policies and the COVID-19 pandemic.

Seongsu Kim, a third-year international student from South Korea, said that it was a struggle at first to move to the U.S. to study at the UI.

“I got my student visa rejected the first time,” Kim said. “I eventually got it the second time, but it was really hard for me to prove to the U.S. government that this is for study purposes.”

Kim said that he was able to understand why some students are choosing to stay in their home countries, as the countries and their universities are improving.

“Majority of international students, they’re coming from either China, South Korea, or sometimes Vietnam. I feel like those countries’ economic status has been going up,” Kim said. “There were a lot of advantages in the past to study abroad and come to the country in terms of finding a job, but these days it is just like, whatever.”

Kim said that he’s seen that the UI’s tuition has gone up over the years, which could impact international students.

“The school just hasn’t improved a lot, but the tuition has gone up a lot,” Kim said.

Overall, Ganim said that he expects the numbers to increase over time, but in the meantime, the UI needs to keep supporting their current international students.

“We need to keep advocating for them so that we can underscore the reality that Iowa City is a welcoming place, that international populations will find a home here, and that our international students contribute in an invaluable way to our campus community,” he said.