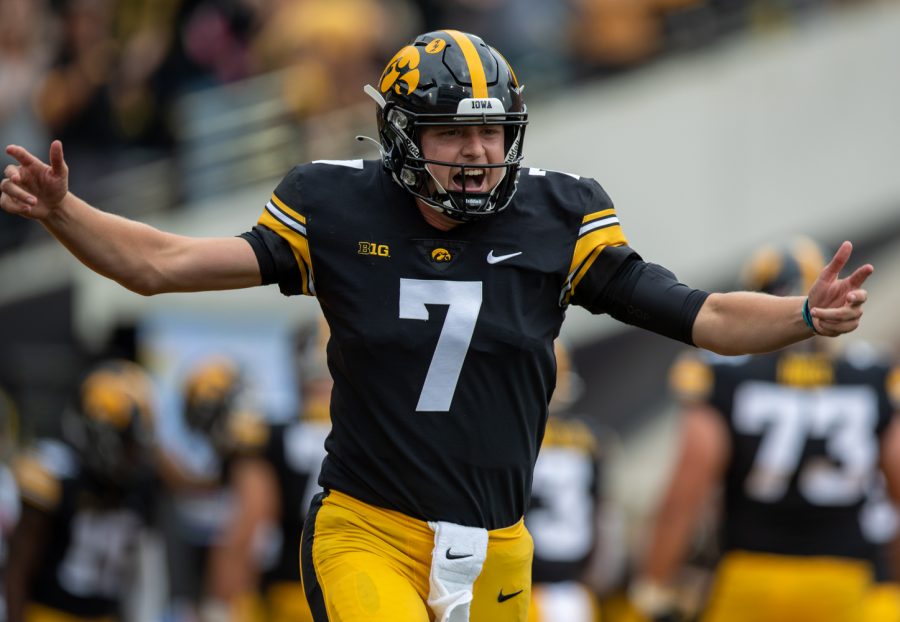 Iowa quarterback Spencer Petras celebrates a touchdown from running back Tyler Goodson during a football game between No. 18 Iowa and No. 17 Indiana at Kinnick Stadium on Saturday, Sept. 4, 2021. The Hawkeyes defeated the Hoosiers 34-6.

The Daily Iowan: So, we’ve asked all your teammates that we’ve talked to this question: What’s the difference between Iowa corn and Nebraska corn? You moved from California to Iowa. Have you picked up on the difference yet?

Spencer Petras: I’ve never stooped low enough to go to Nebraska and eat Nebraska corn. So, I can’t speak to it. I just know Iowa has the best corn.

DI: If you had to pick one or the other, black or gold?

Petras: Probably black. Just because, you know, I think gold as a stand-alone color, isn’t great. It looks great with black and gold. Whereas black, you can mix any color with black and it looks good.

DI: So, my max bench press is 200 pounds. Do you think I can throw the football farther than you?

Petras: No, I don’t. I don’t know if bench press is necessarily a great measure of how far you can throw a football because my bench isn’t that good. It’s better than yours. But it’s not great. I can throw the football pretty far. I don’t even know what muscles go into throwing a football, but I don’t think the chest is big.

DI: We’ve also been asking everybody this question: Do you have a go-to song you listen to when you’re sad? Do you ever just go, “Wow, I need to be in my feelings right now?”

Petras: Yeah, “Dust in the Wind” by Kansas.

Petras: What’s the word I’m looking for? Sheesh. It like, makes you think about life in a really deep way.

Petras: That is a fitting word. I don’t know. Retrospective? Introspective? It doesn’t matter. Kansas. “Dust in the Wind.” That’s my sad song.

DI: Do you have a favorite restaurant in Iowa City and are you NIL-obligated to say that it’s Estela’s Fresh Mex?

DI: Do you think there’s an alternate timeline where Spencer Petras is a guitar-playing guy that goes from bar to bar and just chills out in California and doesn’t play quarterback?

Petras: Well, maybe after I’m finished playing quarterback, I’ll go and do that. That sounds like a fun life. I mean, you know the multiverse theory. If the universe is infinite and ever-expanding, maybe there’s a version of me playing guitar somewhere.

DI: Your dad is a doctor, right?

DI: Was there ever any pressure from him like, “Spencer, you gotta be a doctor?”

Petras: No, I think he wanted me to be more academically inclined than I am, maybe. Like, I think, at first, when I told him I wanted to play football, he told me I had to get straight A’s in school if I wanted to play football. I didn’t come close to that. I don’t even know if I got a single A that year. He saw me play, and I think he kinda realized that, as long as I’m passionate about something and work hard, that he’s happy. As long as he’s happy, I’m happy. But it definitely is interesting, the difference in people. You know, me and my dad.

DI: I’ve seen you show up to these press events with a lot of different flavors of Powerade. Is there one that stands above the rest for you?

Petras: I love lemon-lime. I like red too. But yeah, yellow is my go-to.

DI: So, my last question for you is this: What was your “welcome to Iowa football moment?” Was it a hit? Was there one particular thing where you were like, “Wow, I’m here. And this is something else?”

DI: Thanks so much for your time, Spencer.

Petras: Yeah, I appreciate it. Thanks so much.