Professor Virginia Myers developed and taught hot stamped foil imaging at the University of Iowa in the ‘90s. Deanne Warnholtz Wortman, a former student of Myers, will display her own foil imaging work at her “Art in the Afternoon” exhibit at ArtiFactory this Sunday. 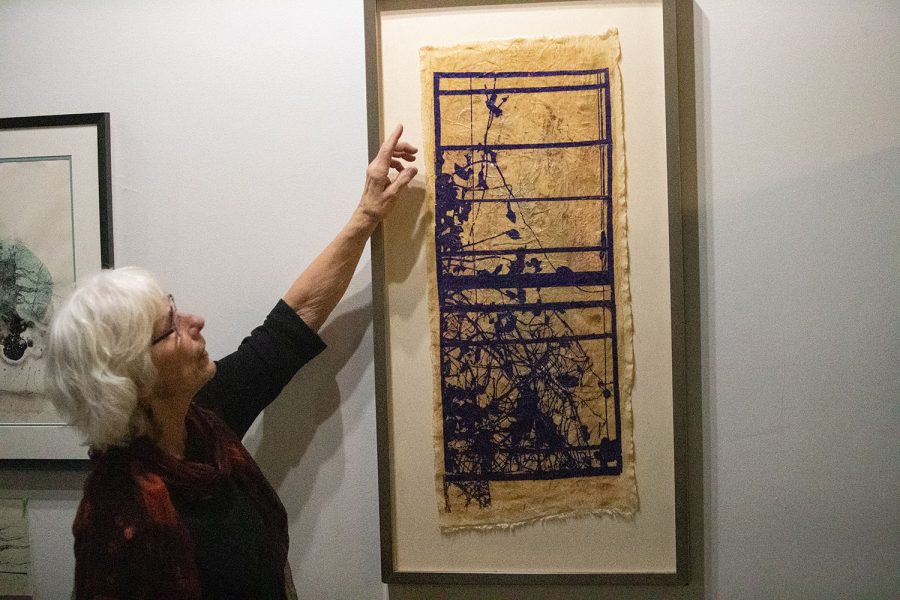 Deanne Wortman’s foil stamped collection on display at Artifactory in Iowa City on Wednesday, Nov. 17, 2021. Wortman, a board member and mentor at Artifactory said “I put these up so students could see what’s possible because they are so worried about the machinery at first.” (Jake Wicks/The Daily Iowan)

Not many people have heard of hot stamp foil imaging, but Deanne Warnholtz Wortman knows it well. To her, foil imaging is quite the expressive and imaginative form of art. On Saturday, her exhibit “Art in the Afternoon” will open at ArtiFactory, sharing the art technique invented by Professor Virginia Myers at the University of Iowa.

Myers began developing hot stamped foil imaging, a printmaking technique, in the 70s. When she went on to teach her first class on the matter in the 90s, Wortman was one of her pupils. After Myers retired, Wortman took over her classes.

Wortman said that one of the greatest parts of foil imaging is the endless possibilities. Whether materials are as tall as a tree or as small as a shoe, they can be foil imaged. In her exhibit, Wortman has used the technique on plexiglass, linen, mirrors, silk, and even a kite.

“The cool thing about this is that there is no end. And there are no rules except don’t burn yourself on a hot plate,” she said. “If you can think of how to do it, it can be done.”

“Art in the Afternoon” will have over 25 pieces in all shapes and sizes, including a 15-foot piece shaped like a tree that runs up the wall and across the ceiling. Wortman also held a workshop on foil imaging last weekend and will be featuring some of that work in the exhibit.

One of ArtiFactory’s board members, Patricia “Tricia” Knox, has taken Wortman’s workshops on foil imaging and said she’s excited to be a part of the group Wortman is forming, called “FoiledAgain.”

Knox said she is most intrigued by the excitement that comes with uncovering the final result and the process that goes along with it.

“I found the foiling process very versatile and a lot of fun,” Knox wrote in an email to the Daily Iowan. “There’s always a period of mystery after applying the foil and heat when one is pulling off the foil backing paper to reveal the result.”

Phil Beck, who is on ArtiFactory’s board of directors, didn’t know anything about hot stamped foil imaging before Wortman’s workshops and exhibit, but said it’s unlike anything he has ever seen before.

Beck said he’s most looking forward to re-educating the public about Professor Virginia Myers, because of her impact on art in Iowa City and foil imaging’s uniqueness to the UI, as well as providing an outlet for the community to interact with art as opposed to just viewing it.

Foil imaging is “democratizing,” as Beck calls it, meaning that it’s something anyone can be capable of – regardless of their background in art.

“We’re trying to not just feature established artists, we’re looking to feature up and coming artists but also to bring the community into the world of art,” he said.