Brandi Gloeckner has waited three years to be a Kid Captain. Brandi is a cancer survivor who has been through many surgeries and is currently battling stage five kidney failure. 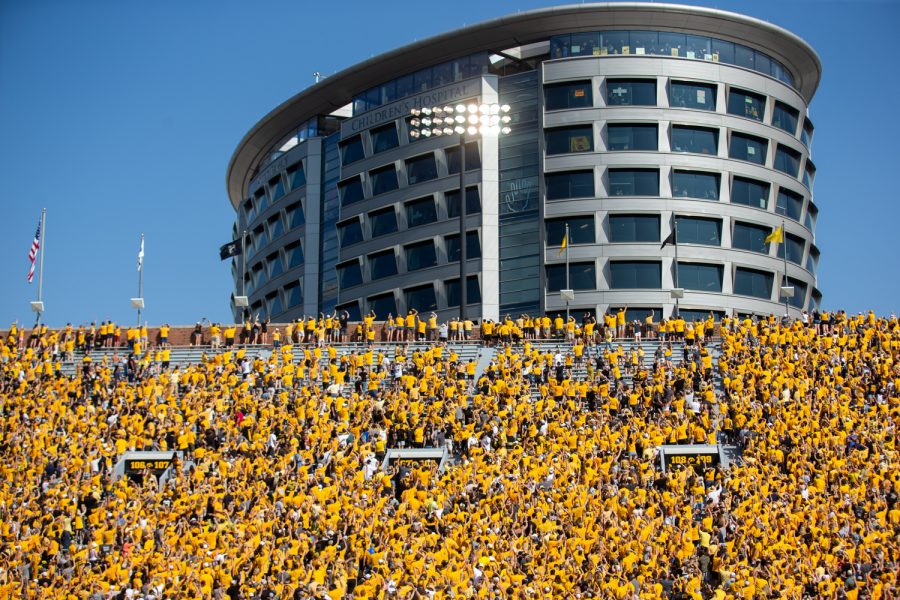 Fans participate in the wave toward the University of Iowa Stead Family Children's Hospital during a football game between Iowa and Kent State at Kinnick Stadium on Saturday, Sept. 18, 2021. The Hawkeyes defeated the Golden Flashes 30-7.

Brandi Gloeckner is an avid sports fan, but she has never attended a Hawkeye football game. That will change on Saturday afternoon.

Brandi, a high school sophomore, will act as the Iowa football team’s Kid Captain for the Hawkeyes’ Week 12 game against Illinois at Kinnick Stadium. For her, the mid-November timing couldn’t have been better.

“I like the cold,” Brandi said. “Yeah, it’s gonna be nice and cold. Hopefully it snows.”

Brandi and her parents, Cindy and Bryan, currently reside in Eastern Iowa. Coming from a family of Hawkeye fans, the Gloeckners have received positive reactions for Brandi being a Kid Captain.

Brandi was supposed to be a Kid Captain last year, but her captaincy was delayed to this fall because of COVID-19.

In 2016, her parents knew something was wrong when Brandi complained about pains in her left leg. After visiting a local doctor, they discovered that Brandi had a tumor in her left leg.

“It’s been a godsend that we’ve had that hospital so close, and the kind of professionalism and care that University of Iowa Hospitals take,” Bryan said.

Brandi first visited the University of Iowa’s Stead Family Children’s Hospital in 2017, a year after her tumor was discovered, and was there for a day before she was discharged.

“Unfortunately, we’ve been there or she’s been there quite a bit since,” Cindy said.

She underwent six weeks of chemotherapy for the bone tumor alongside a surgery where her fibula and a nerve were removed from her left leg as well as her tumor. By February 2017, Brandi was done with her chemotherapy.

“We absolutely have faith in this team of medical doctors and professionals and nurses to take care of her,” Bryan said.

Months after finishing her chemotherapy, Brandi broke her leg and noticed that it wasn’t healing. She went to a hospital where she was diagnosed with bronchitis and given an inhaler but wasn’t feeling better.

“So, they took me into the actual hospital, to which they diagnosed me with chemotherapy-induced heart failure,” Brandi said. “And they did an emergency surgery. And they put in an LVAD, which is a left ventricular assist device, which basically kind of pumps your blood out for you.”

On top of this, Brandi’s nose was cauterized, which resulted in interior burns. Doctors also found that her legs were different lengths, which required screws to be put in to stop further growth in one of her legs.

In February 2020, Brandi was put on the heart transplant list and received a heart a week later.

“It was amazing,” Bryan said. “We couldn’t believe it. To be honest with you. It was just stunning. We were kind of preparing ourselves for up to a year.”

Brandi has been receiving all her heart-related care at the Stead Family Hospital.

Two weeks ago, Brandi was diagnosed with stage five kidney failure. Doctors are currently trying to get her on the kidney transplant list but first she must undergo dialysis.

“I think she makes us laugh just about every day,” Bryan said.

The Gloeckners’ have spent much of their time with Brandi and have seen the struggles and challenges that she has endured.

“The challenges that these kids have to go through, you know, these football players and the fans, they get to come out and watch a football game, when these kids that are Kids Captains have had a lot of challenges in their life,” Bryan said.

The Gloeckners attended Kid’s Day at Kinnick in August, where they “rolled out the red carpet” in spoiling the kids, so they are excited to see how Brandi is treated during her day.

“She doesn’t really get excited about too many things, but she definitely deserves it,” Cindy said. “I mean, she’s been through heck and back.”