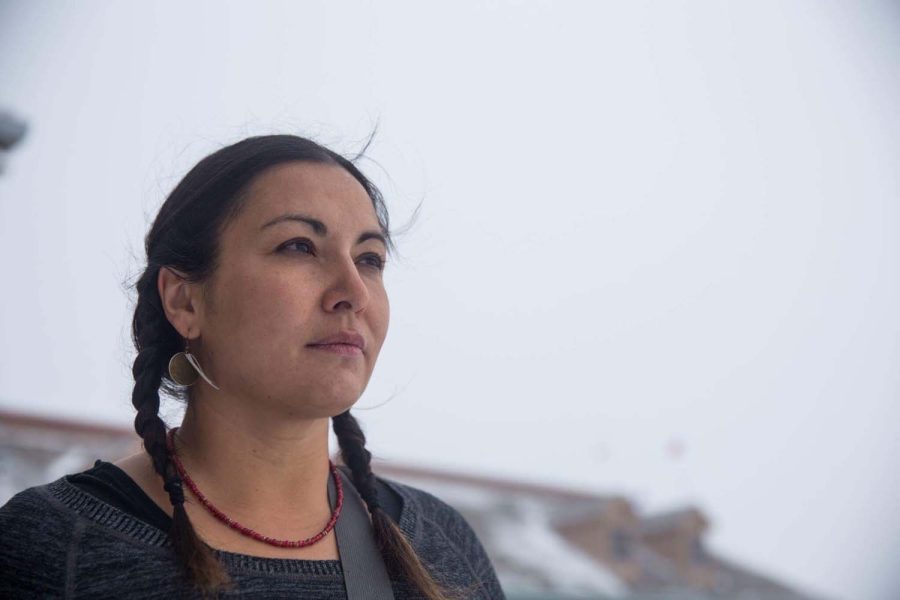 As the founder of the Great Plains Action Society and a member of Iowa City’s Truth and Reconciliation Commission, Iowa City’s Sikowis Nobiss works to advocate for Indigenous rights and causes around Iowa City and Iowa.

Nobiss is Plains Cree-Salteaux of the George Gordon First Nation, and she founded the Great Plains Action Society in 2015 and serves as the executive director. The goal of this organization is to increase Indigenous solidarity in and around Iowa City, she said.

“I’m proud of the many nations that make up the first peoples of Turtle Island. It’s a very powerful culture and has important traditions that keep us grounded,” Nobiss said. “We work to create ideologies that are better for this world.”

Nobiss said she’s an Indigenous person from the plains who speaks on behalf of the grass and water. Agribusiness has invaded these lands through colonial capitalist farming practices that have contributed greatly to the climate crisis, she said.

“Many people have this Christian mentality that God gave man dominion over the Earth, which is the motivation for colonial capitalism,” Nobiss said. “We work in complete opposition to that, believing that Earth is a living being that needs to be protected.”

After completing her master’s degree in Religious Studies at the University of Iowa, where she chaired the Native American Student Association, Nobiss noticed a need for a place for Native Americans in Iowa City to meet.

“It was hard to gather enough Natives in Iowa City to meet because there are so few of us — 10 people at the most,” Nobiss said. “During the fight against the Dakota Access Pipeline, I knew there were more people who wanted to get involved, so I created the Great Plains Action Society.”

Nobiss said she was inspired by the Dakota Access Pipeline issue and the need for Indigenous voices in Iowa to speak on climate and social justice issues.

“I wanted to educate people and continue to push back against the systems that are protecting and perpetuating great harm on the environment,” Nobiss said.

Another important aspect of her social justice work centers on Indigenous people who are at higher rates of being missing and murdered in the U.S.

According to the National Crime Information Center, in 2016 there were 5,712 reports of missing American Indian and Alaska Native women and girls, though the U.S. Department of Justice’s federal missing person database only logged 116 cases.

The Centers for Disease Control and Prevention found that murder is the third-leading cause of death for this population and the rates of violence can be up to 10 times higher than the national average.

The Great Plains Action Society works to create a community through a variety of events, including youth camps and ceremonies, suppers and dinners, and rallies about missing and murdered relatives, Nobiss said. The organization also hosts free clothing drives, different parties for holidays, and mutual aid events.

The organization also works to ban holidays like Columbus Day, which is still recognized as a holiday by the state of Iowa, Nobiss said. Instead of celebrating Thanksgiving, Nobiss said the organization is putting on a celebration called “Truthsgiving” with a goal to reject colonial holidays that perpetuate dangerous stereotypes and whitewash history.

Nobiss grew up in Winnipeg and Saskatchewan, Canada. She said she moved to Iowa City to pursue a master’s degree, originally studying Hinduism.

“I realized I needed to work on my people’s religion and culture, so I began focusing more on Native American studies,” Nobiss said.

Nobiss said she is also motivated by the fact that so few places in the country are actively listening to Indigenous people. She said she decided to take on the work of fighting these disparities, especially in smaller communities like places in Iowa.

“We all have to decolonize our minds, and there’s nobody in North America that hasn’t been colonized in some way,” Nobiss said. “Society doesn’t uplift Native American and Indigenous households, and this is a lifelong process of changing our mindsets to reestablish white supremacist systems.”

Nobiss said as a result, she’s changed many of her habits, including what she eats and buys. She said she tries to live the way her ancestors would have, which is a completely different world than the one she’s currently living in, she said.

“To be born Indigenous is a political act,” Nobiss said. “I’ve seen our ancestors and relatives have this same fight.”

While Nobiss said this is a fight that will continue long after her lifetime, she is proud to be Indigenous and grow as a person through this identity.

“I really love that we’re building Indigenous and BIPOC power in Iowa, which isn’t considered Indian country,” Nobiss said. “Natives have been genocided and cleared out here, but we are working to empower our voices and make sure they’re heard.”