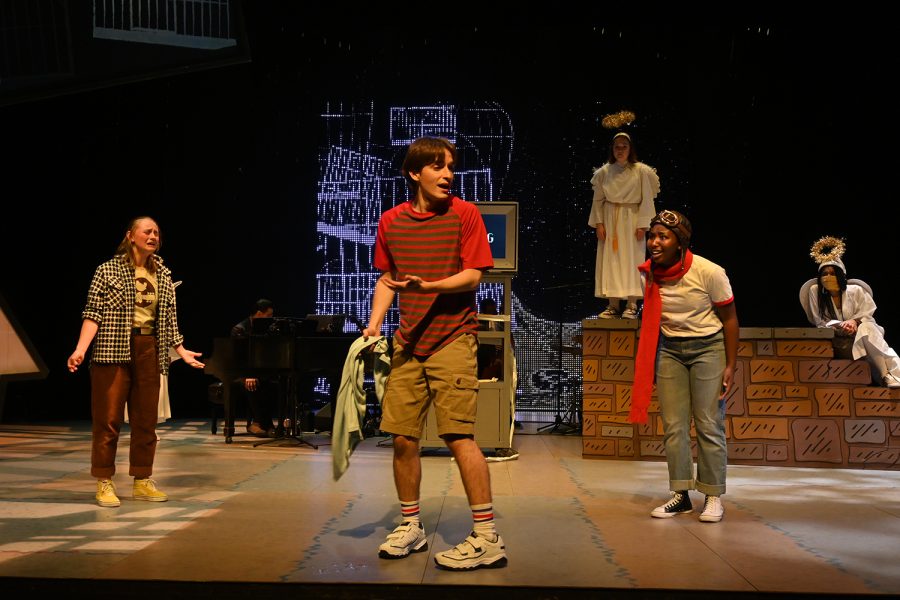 Actors perform during a rehearsal of the play “Smile Medicine” on Wednesday, Nov. 10, 2021. The play is written by Dakota Parobek.

Smile Medicine will take the E.C. Mabie Theatre stage for the first time this Friday at 8 p.m., with performances through the weekend and into next week.

Smile Medicine follows the character of Sad-bird on a journey through life after the death of their best friend, Good-dog. The play, with several characters loosely based on Charles Schulz’s Peanuts comics, presents themes of loss, regret, and hope.

The play was written by Iowa Playwrights workshop graduate Dakota Parobek. Smile Medicine has been an idea and rough draft since 2013, and was included in the New Play Festival’s reading series in 2019.

“Going through that process, which was really kind of explosive, I mean, just working with actors through a text, you sort of realize what it is you’ve actually written, what it is that’s actually missing,” Parobek said.

Smile Medicine will mark the first time in at least 20 years where a recent graduate’s work is produced as a mainstage production.

Parobek said the Playwrights Workshop allows playwrights to look at the script as a blueprint for a performance. Collaborating with other elements of performance is a way to put the blueprint into action, such as actors and stage managers.

RELATED: UI Theatre will bring audiences back together in ‘HOW CAN I KEEP FROM SINGING’

“Something I was really interested in writing was what happens before the play and what happens after the play, like how the audience is entering the space, how they are welcomed in and invited in,” Parobek said. “Just using the time I’m sitting in a seat to still kind of bridge the gap between real life and the theater world.”

Smile Medicine includes jazz trio of Rayne Dias on piano, Jerome Gillespie, Jr. on drums, and Blake Shaw on bass. Parobek knew from the beginning of the writing process that music was going to be incorporated.

Smile Medicine is an especially beautiful show because of its “high highs” and “low lows,” Noll said.

“What’s beautiful about the show is it has these really emotional experiences that are really familiar to all of us, but it also has a really beautiful message of connection and what can sort of bring us out of our own despair and our own grieving,” Noll said.

Smile Medicine is directed by the Theatre Department’s Head of Acting Paul Kalina, who said he is excited to be back in person, working with others, and having a live audience and performers to tell a story after an extended time of disconnection.

“That first day I walked in and saw the taped-out stage, our floor plan, it was just really exciting to be back in and be in that collaboration,” Kalina said.

Smile Medicine has characters that bring a sense of magical realism. The play has touching moments of humor and absurdist breaks, but carries themes of lost connections and reconnection. Kalina said that the characters Parobek has written are put through an allegory that helps the audience understand a sense of connection and need.