After a 16-0 start, the Hawkeyes have dropped two in a row ahead of their first-round matchup against American in the national tournament. 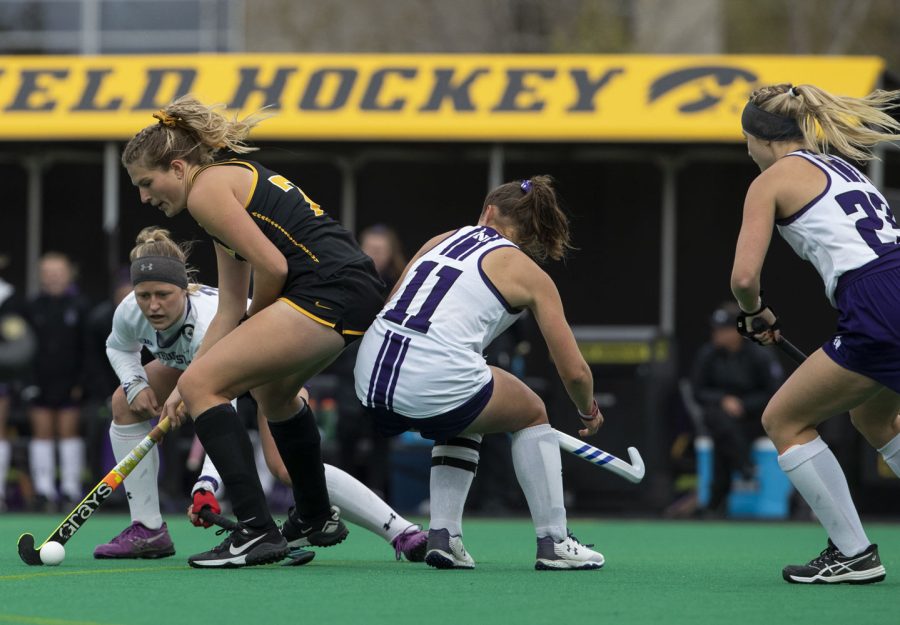 Iowa midfielder Ellie Holley works to move around Northwestern midfielder Kayla Blas at a field hockey game between Iowa and Northwestern at Grant Field on Oct. 29, 2021. The Wildcats defeated the Hawkeyes 2-1.

Iowa field hockey is hosting the first and second rounds of the NCAA Tournament for the first time since 1999.

In the 20-team field, the top four seeds host a region of four teams each. Iowa is the No. 2 overall seed in the NCAA Tournament. There are also two play-in games before the first round, hosted by the higher seed.

The top four seeds in the 2021 NCAA Tournament all hail from the Big Ten. Rutgers earned the No. 1 overall seed after winning the Big Ten Tournament, while No. 3 Michigan and No. 4 Penn State also earned hosting privileges for the event.

Overall, there are six Big Ten teams in the NCAA Tournament. Maryland earned a spot in Penn State’s region, while Northwestern is in Iowa’s region.

Throughout the 2021 season, Iowa has had fans turn out in droves for its home games. The Hawkeyes had 1,033 fans for their victory over then-No. 1 North Carolina on Aug. 29. Later in the season, Iowa had a record 1,236 fans that rushed Grant Field after the Hawkeyes toppled then-No. 2 Michigan in a shootout, 2-1.

Now, with the chance to host two postseason games, the Hawkeyes are looking forward to having their fans around to give them a leg up.

“It’s going to be really exciting, and I know a lot of people coming this weekend,” fifth-year senior midfielder Ellie Holley said. “My patients at the hospital come out and it is really sweet, and having my British family come out, it is going to be really awesome to see them.”

Iowa enters the NCAA tournament ranked third in the National Field Hockey Coaches Association Poll. The Hawkeyes were rated No. 1 in the poll from Sept. 28 to Nov. 9. Iowa, is however, currently riding a two-game losing streak that’s caused it to drop in the rankings.

After starting the season 16-0, the Hawkeyes suffered back-to-back losses to conference foes Northwestern and Michigan.

Northwestern took down Iowa, 2-1, in the final game of the regular season. Then, Michigan defeated Iowa, 3-2, in the semifinals of the Big Ten Tournament.

No. 1 Rutgers and No. 2 Michigan now sit ahead of Iowa in the NFHCA Poll.

Iowa will face American on Friday at noon, while North Carolina and Northwestern will match up at 2:30 p.m. The two winners will play at Grant Field on Sunday at 1 p.m.

American won the Patriot League regular season and tournament titles. Since a loss to Maryland in the regular season, the Eagles have rattled off eight consecutive wins. Eagle goalkeeper Brynn Underwood won Patriot League Goalkeeper of the Year, while four other players were selected to the all-conference team.

“They’ve got an outstanding coach and it will be tough to play against a lot of threats,” Iowa head coach Lisa Cellucci said. “It isn’t something we haven’t seen before, so we feel good about that. And if we play our brand of hockey, we should be successful.”

American is the only team in Iowa’s regional that the Hawkeyes haven’t seen in the 2021 season.

Iowa beat North Carolina, 3-1, in the ACC/Big Ten Challenge to start the season in August. But the Tar Heels have knocked the Hawkeyes out of the past two NCAA Tournaments — the Elite Eight in 2019 and the Final Four in spring 2021.

Northwestern, meanwhile, is the team that ended Iowa’s undefeated streak in the 2021 season.

“We’re taking it game-by-game, and there’s some great teams in the tournament bracket,” junior midfielder Esme Gibson said. “We have our sights set on a national championship, but we have three games before we get there.”