The event will be the Hawkeyes’ last until Jan. 16. 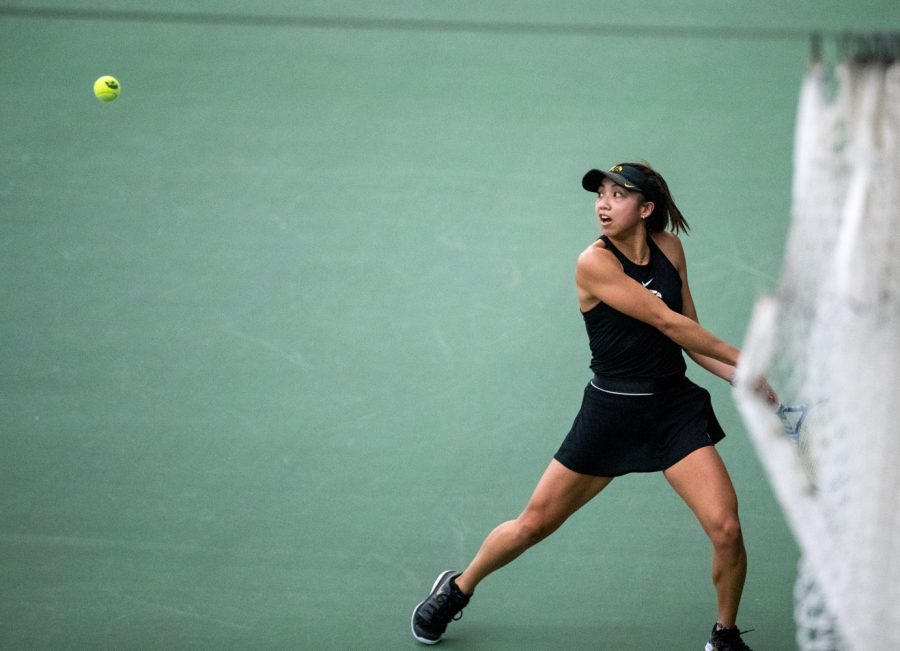 Iowa’s Michelle Bacalla watches the ball come to her during a women's tennis meet at the Hawkeye Tennis and Recreation Complex on Thursday, Feb. 26, 2021. The Hawkeyes defeated the Hoosiers with a score of 4-3.

Iowa women’s tennis will play its last event of the fall season this weekend at the Fertitta Tennis Complex in Las Vegas. The Hawkeyes will participate in the UNLV Invitational from Friday to Sunday.

Counting Iowa, six schools are slated to compete in the Rebel-hosted tournament that will feature singles and doubles draws.

“Definitely want to end on a strong note where we can take some confidence into the spring season,” Iowa head coach Sasha Schmid told The Daily Iowan ahead of her team’s upcoming trip to Nevada. “I think we’ve made progress, especially in the last couple weeks since [ITA] Regionals.

“We were really able to learn a lot from those matches,” Schmid added. “Now, it’s just a matter of being able to get back out there again and see if we can really see the progress and the competitive situation with pressure on the line.”

Among the Hawkeyes competing is Michelle Bacalla. The senior from Skokie, Illinois, enters the UNLV Invitational with a bit of momentum. At the University of Iowa-hosted ITA Central Regional Championships, Bacalla won three consolation matches in a row to close out the tournament.

Despite her solid performance in the ITA Central Regional Championships about two weeks ago, Bacalla knows she still has work to do.

“Definitely building on endurance, for sure,” Bacalla said. “Doing a lot of self-reflection, and a lot of mentally tough drills with coaches and teammates. Lastly, just cleaning up a lot of technical things, before getting after it this weekend.”

Bacalla credits her improved on-court performance to the mental and physical adjustments she’s made to her game throughout the fall season.

“Definitely focusing on a lot of the goals we’ve set out, especially for me, to focus on core positioning and mental toughness,” Bacalla said. “Just being able to play one last couple matches before the season starts. I’m really looking forward to having our team there and really getting after it in a warmer setting and playing outside before going inside for most of the season.”

With the fall season coming to a close, Bacalla and the Hawkeyes have had a chance to reflect on what they have and haven’t done well on and off the court since September. After the UNLV Invitational, Iowa will have until Jan. 16 —when the spring tennis begins — to improve upon their deficiencies.

“In the team aspect, I am very impressed with a lot of my teammates overcoming a lot of their personal obstacles that we’ve all discussed,” Bacalla said. “Personally, I am very proud to say that I’ve worked really hard in grinding through a lot of tough situations, especially in my last few matches in [ITA] Regionals.”

Schmid said she tailors her athletes’ fall competition schedules based on their needs. She tries to ensure her players get several chances to make significant on-court progress before the spring season starts.

“I think just everybody really has a good sense of their own game and the best way for them to structure their competitive matches on their own terms,” Schmid said. “Those are the two areas that I think we’ve probably focused on, and I’ve consequently seen a lot of improvements also.”