The hockey club, which hasn’t earned a point since Oct. 27, will face the Indy Fuel on Friday and the Kalamazoo Wings on Saturday. 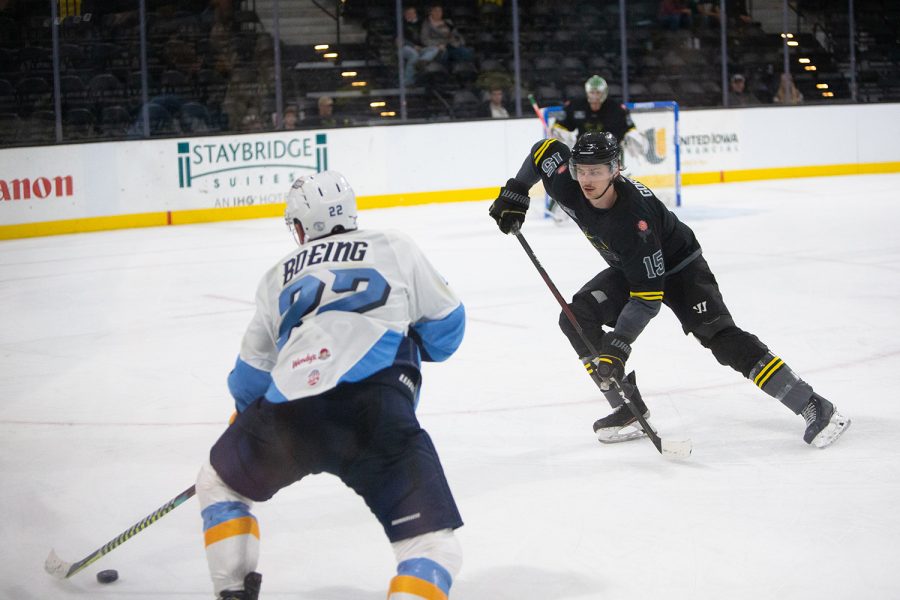 Walleye forward Brett Boeing attempts to get by Heartlander defenseman Fedor Gordeev during a hockey game between the Iowa Heartlanders and the Toledo Walleye at the Xtream Arena in Coralville, Iowa on Friday, Oct. 30, 2021. The Walleye won against the Heartlanders 10-1.

The Heartlanders last earned a point on Oct. 27 and sit in last place in the ECHL Central Division standings with three points on a 1-6-1 record.

But Iowa will have a chance to make progress in the standings this weekend. The Heartlanders play the Indy Fuel at 7 p.m. on Friday and the Kalamazoo Wings at 3 p.m. on Sunday at Xtream Arena.

“We’ve lost some players to injuries and call ups and then you put players in positions where you’re hoping to get that opportunity and they’ll take the ball and run with it,” Fleming said Tuesday. “It hasn’t been the case thus far. We had a good practice today. We’re just going to focus on the process daily and what we have to do to get better daily.”

Goaltender Trevin Kozlowski said it was all about staying positive.

“A lot of guys talk about short memory and stuff like that,” Kozlowski said. “I know our group right now we’re taking it with a bit of a grain of salt right now in the fact that we all need to step it up in our own different ways and start contributing to get us back in the win column.”

The Heartlanders have received back forwards Kris Bennett and Alex Khovanov and defenseman Riese Zmolek from AHL’s Iowa Wild this week.

Bennett and Zmolek were on the Heartlanders’ opening night roster on Oct. 22. But the duo was recalled to the Iowa Wild on Oct. 28.

Bennett has competed in three games with the Heartlanders, tallying three goals and two assists.

Zmolek didn’t record any goals or assists in his three games, but Fleming said the defenseman will provide defensive stability to the club. The Heartlanders have surrendered 32 goals in the past five games.

Bennett was announced as the Heartlanders’ captain on Thursday, while Zmolek and fellow defenseman Jake Linhart are alternate captains.

Khovanov started the season with the Iowa Wild but was assigned to the Heartlanders on Oct. 28. The forward participated in two games for the Heartlanders, putting up one assist before he was recalled to the Wild on Nov. 1.

The right-handed shooter did not compete in any games with the Wild before he was assigned to the Heartlanders again this week.

Despite the flurry of transactions the Heartlanders have made since beginning the season, defenseman Fedor Gordeev has been a constant skater on the squad.

The 6-foot-8 left-handed shooter on an NHL contract is one of four Heartlanders to record time in all eight games. He spent last season in the AHL, playing in seven games with the Wild.

“[Gordeev] has some good things in his game,” Fleming said. “There’s things that he is working on. That’s why he’s here. But I do like the fact that he’s a big body, he’s rangy, he’s got a good stick. There’s areas in his game that we’re working on so that he can become a more complete defender but a great guy to be around.”

Gordeev said that his frame makes him a slower player. So, he is working on becoming faster on pivots and with his feet.

“Coaches have been huge,” Gordeev said. “Ever since I’ve got here, they both have spoken to me and said, ‘It’s all about development,’ and, ‘We’re going to do whatever it takes to help you get to the next level.’”