Five veterans with a University of Iowa connection were recognized at the 2021 Hawkeye Distinguished Veterans Awards on Thursday at the Iowa Memorial Union. 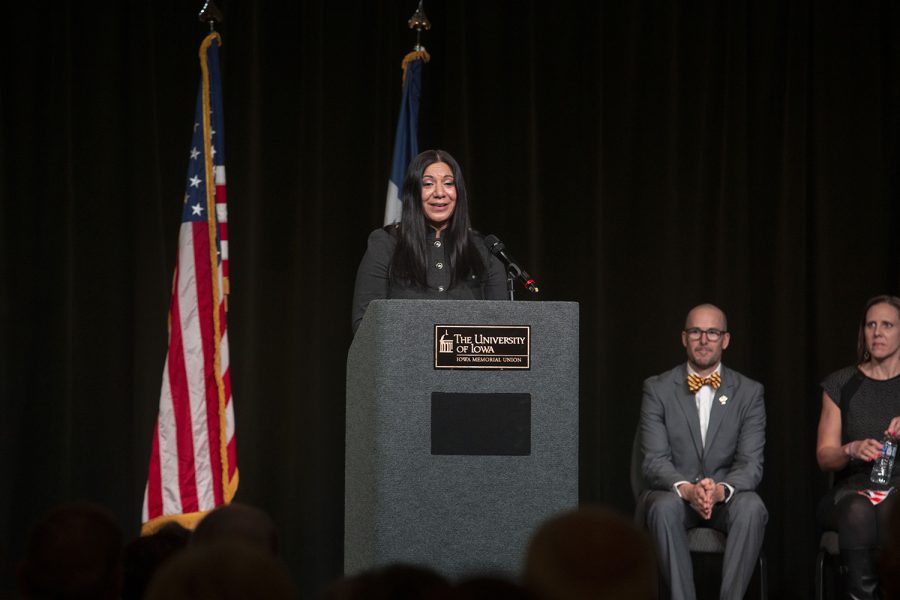 Five veterans with a University of Iowa connection were recognized on Thursday during the Hawkeye Distinguished Veterans Awards ceremony.

“The recipients of the award were selected by the committee based on their strong University of Iowa connection, honorable service to our country, military accomplishment or contributions, and service to our community,” said Sara Sullivan, interim director of the UI Veteran Education, Transition, and Support program.

Bruno’s time in the military has directly impacted her style of teaching, she said, as the experience showed her genuine love and community.

“They invested in me, helped me develop my intellect and taught me how to lead. It was the first space outside of my immediate family where I felt like I belonged. Those teachings have stayed with me to this day,” Bruno said at the ceremony.
Chaplain Col. George Campbell Jr.
Campbell, a UI Reserve Officer Training Camp graduate, served over 30 years in the U.S. Army Reserve. When he attended the UI, ROTC was a one-year, mandatory requirement, he said.

“I was in ROTC, but I made friends, and because of them I stayed in the program, and that led to my being here today,” Campbell said. “Today is a day to honor all those who raised their hand and swore to defend the Constitution of the United States against all enemies, foreign and domestic. I am proud to be one of those veterans.”
Gen. Charles Horner
Horner is a UI ROTC graduate who served 36 years in the U.S. Air Force as a commander in chief of North American Aerospace Defense Command, U.S. Space Command, and Air Force Space Command.

Horner shared a story about former UI Professor James Van Allen, who died in 2006 and the namesake of the UI’s Van Allen Building, calling him the only reason he was being recognized, as Allen gave him a passing grade in his physics class.

Horner said the pride he sees other veterans have about having served in the military used to surprise him, but it does not anymore.

“I realized it’s not because they’re there defending the nation. They’re there to defend an idea. That idea is that all men are created equal and that there are unalienable rights,” Horner said. “And that is the reason that I’m proud to have served, and that other veterans are proud to have served.”
Col. Kenneth Madden
Madden is also a graduate of the UI ROTC and a 31-year military veteran in the U.S. Army. For Madden, Veterans Day is not only about honoring the veterans who served, but those who were not able to return as well.

“As I was participating in our local veterans’ ceremony, I came to the conclusion that the most honored veterans, most distinguished veterans, are those that are no longer with us and can’t be here today,” Madden said. “I would like to share, at least figuratively, some of this recognition with them.”
Staff Sgt. Jacob L. Schillio
Schillo, the final recipient of the award, served in the U.S. Air Force for six-and-a-half years and is currently a graduate student in the UI Department of Anatomy and Cell Biology. Schillo also founded the UI’s Veteran Peer Advisory Program as well as the university’s Veteran Innovation Series.

Schillio said while he was considering schools to go to for his doctorate, the UI naturally became his choice.

“When I decided to come back to the UI for my Ph.D, it was in large part to the people that were here. I felt I had the right people in the right place at the right time,” he said. “Within a month of returning for my interview, I canceled my other interviews at other institutions. Things just felt right, and we were Iowa bound.”

He credited numerous people for his successes both in the military and at the UI, including Matthew Miller, director of Military and Veterans Student Services.