Iowa’s approved set of redistricting maps placed the Congressperson in the same district as Rep. Cindy Axne, Rep. Mariannette Miller-Meeks will run in the 1st District. 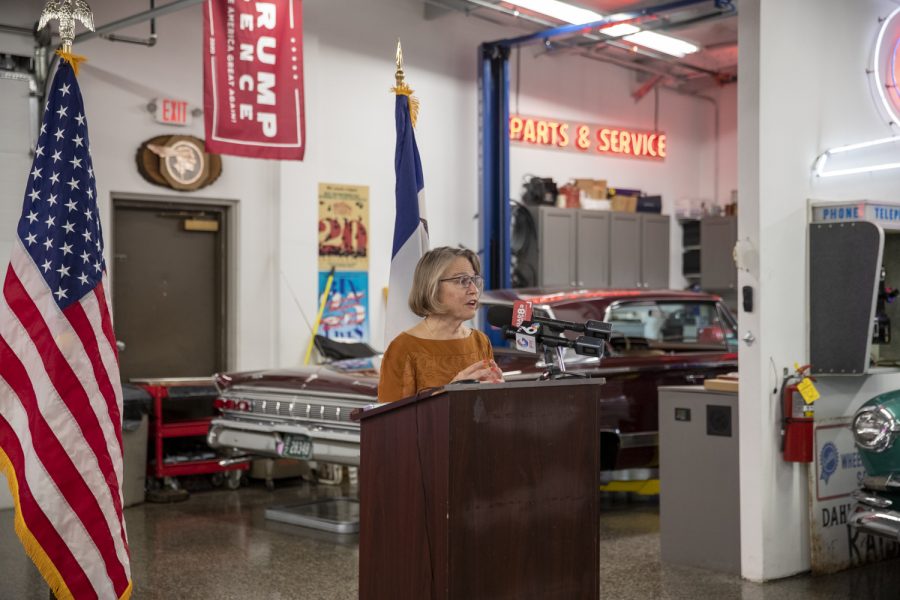 Rep. Mariannette Miller-Meeks, R-Iowa, announces she is seeking reelection in Iowa’s 1st congressional district during a press conference at Dahl Old Car Home in Davenport on Wednesday, Nov. 10, 2021. Miller-Meeks said a goal is to win by more than six votes in 2022 after defeating Rita Hart by a slim margin in the 2020 general election.

DAVENPORT — U.S. Rep. Mariannette Miller-Meeks, R-Iowa, will run in Iowa’s newly drawn 1st Congressional District in 2022. She made her announcement on Wednesday morning.

Miller-Meeks is currently serving her first term in Congress after winning her seat by six votes in 2020. She spent 24 years in the Army as a private, nurse, and doctor and served as the Director of the Iowa Department of Public Health from 2010 to 2014. She represented Senate District 41 for a partial term before resigning to serve in the U.S. Congress.

I’m running for re-election in Iowa’s 1st District! I’m committed to standing up to Washington Democrats and their Socialist Agenda by doing everything in my power to fight for Iowan common sense values.

Donate today to help me Take Back the House! #ia01 https://t.co/eqhyC5ow7X

At a Wednesday press conference in Davenport, Miller-Meeks did not provide any concrete plans as to if she will sell her home in Wapello County, and where she will relocate to.

In Iowa, candidates can choose to run in any congressional district, as long as they reside in the state.

Miller-Meeks said she and her husband made the final decision to run in the first district on Tuesday night.

“[I had] no reservation to take on Cindy Axne in the 3rd congressional district, that would have been a smaller district,” Miller-Meeks said. “But given my long association and affiliation for me personally, I felt like I was betraying people who time and time again had voted for me, supported me, for whom I talked about, for whom I represented, and they finally got the person in Congress that represented them.”

Bettendorf business owner Kyle Kuehl announced his intent to run as a Republican in the first district on Monday, challenging Miller-Meeks.

Miller-Meeks said she looks forward to any primary challengers.

“I’ve had a primary every single election I’ve ever had, so it’s not unknown to me to run against a primary challenger,” she said. “I think primaries make you stronger as a candidate and they force you to think about the election, because otherwise, people think they have more time.”

Miller-Meeks emphasized that she would fight for conservative values and go against President Joe Biden’s agenda in her next term.

“I will never give up on Iowans, our future, the American dream, or the conservative values that have made our country the beacon of hope and freedom that it is,” she said.

Bohannan said in a prepared statement responding to Miller-Meeks’ announcement that Bohannan has been meeting with voters in the district and hearing their concerns.

“It’s been an honor to hear from folks about the issues that matter most to them — including fixing our roads and bridges, creating good-paying jobs, supporting small business, and improving our education and health care,” she said.  “One thing is clear: Southeastern Iowans want a Congressional representative who values truth, integrity, and will put delivering results for the people of Iowa above divisive partisan politics.”