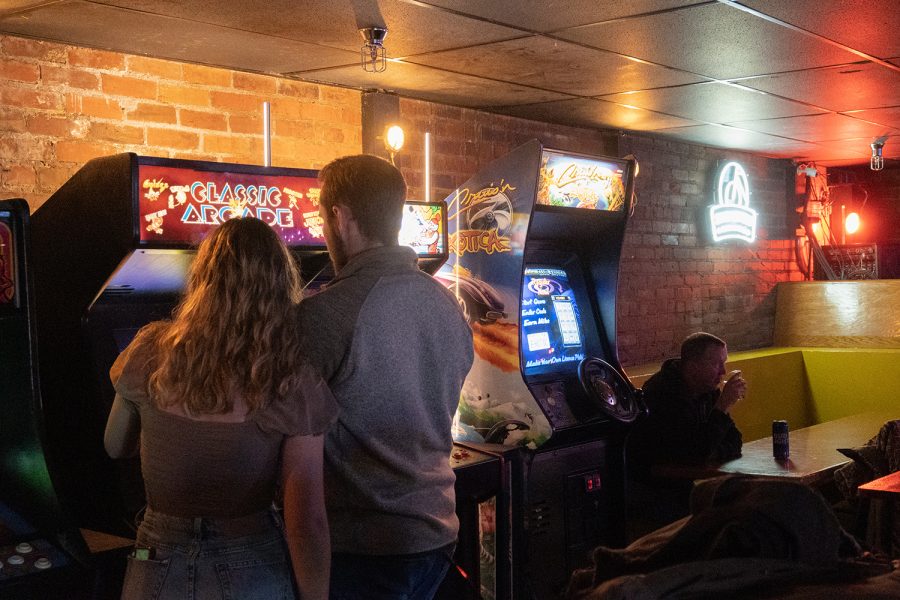 Joystick, similar to the Yacht Club, will continue to host stand-up comedy and karaoke nights.

Jason Zeman, CEO of Corridor Entertainment Group, which owns Joystick along with the adjacent Studio 13, said business and reception in the first month under the new name have been great.

“I knew the venue needed a refresh and saw that as a great opportunity to continue live and local entertainment, while serving a need that wasn’t being met,” Zeman wrote in an email to The Daily Iowan. “I didn’t feel the space would be good as solely an arcade bar, but it seemed like a fun addition for the comedy-focused space.”

Zeman wrote that supply chain constraints have slowed the bar’s ability to buy new games since it opened in October.

“The supply chain issues have hampered our ability to get games as fast as we like (we actually held off the transition two months because of it). We have over two dozen games with at least a dozen more coming soon,” he wrote.

Travis Coltrain, Joystick booking director and events coordinator, said the bar can help the Iowa City stand-up scene by acting as a central congregation point for comedians in the area.

Coltrain, who worked at the bar back when it was called Yacht Club, said the bar’s atmosphere has mostly stayed the same since the name change, maintaining its laid-back, easy-going ambiance.

“I think Joystick very much still has that vibe of, ‘Okay, you can sit down, relax, watch a comedy show, maybe sing some karaoke, play a few video games, have a beer or two and then kind of like, make your way home,’” he said.

Coltrain, who is a writer and comedian himself, hosts the Thursday open mic nights, along with the events on Fridays and Saturdays. He said this has helped him stay motivated to keep writing and always have fresh material.

“We have regulars who come to a lot of our comedy shows,” he said. “I don’t want to do the same material every single time I’m up there. It definitely pushes me to constantly be writing new material and constantly be thinking of new ways to do jokes.”

Zachary Ziolkowski, 28, a Joystick customer, said he appreciates the inclusivity of the bar.

“I think it offers a safe space for LGBTQ, and it’s just an inclusive space for people who need a home,” he said.

“I feel like there’s always something going on here,” he said. “It’s a little bit for everyone and I think everyone appreciates that.”