With Week 9 of the NFL season complete, The Daily Iowan breaks down the performances of former Hawkeyes across the league. 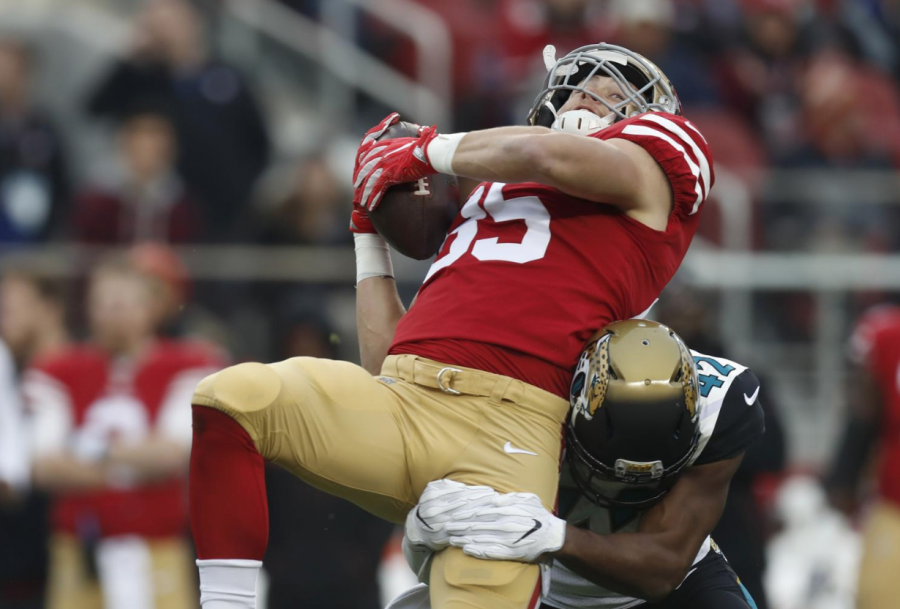 Iowa tight ends dominated the Hawkeye-related storylines again in Week 9 of the 2021 NFL season. George Kittle returned for the 49ers, while Noah Fant missed the Broncos’ contest against the Cowboys after he was placed on the COVID-19 reserve list.

Defensively, former Hawkeye safety Amani Hooker led the Titans in tackles as they defeated the Los Angeles Rams in primetime on Sunday night.

The most recognizable former Hawkeye in the NFL returned Sunday from a calf injury that had sidelined him since Week 4. And he didn’t miss a beat.

Kittle accounted for six receptions on eight targets and a touchdown in a 31-17 losing effort against the now 8-1 Arizona Cardinals. Sunday was the first time he had crossed the goal line this season. And Kittle’s postgame remarks about being back in action? Pretty typical for the former Iowa star.

“Yeah, playing football is fun,” Kittle said on Sunday. “Losing is not fun, but it was good.”

Even with the injury that forced him to miss four games, Kittle is still second on the 49ers in both receptions with 25 and receiving yards with 328. Kittle signed a five-year, $75 million contract before the 2020 season, making him the highest-paid tight end in the NFL.

While Kittle was back on the field Sunday, his former teammate and fellow tight end Fant was held off it for the first time this year.

After Fant tested positive for COVID-19 on Tuesday, he could not return the two necessary negative tests needed to be taken off the COVID-19 reserve list.

In his absence however, the Broncos put together arguably their best offensive performance of the year. Denver’s 30-point outburst in a 14-point win marks the most points the Broncos have scored all season.

Fant could return next week when the Broncos take on the Philadelphia Eagles on Sunday afternoon.

When the Tennessee Titans faced the Los Angeles Rams on Sunday night, some fans wondered how the Titans’ defense would go about stopping Matthew Stafford and one of the NFL’s most explosive offenses.

Hooker had the answer.

In the 28-16 victory, Hooker, a former Hawkeye safety, registered a team-high 12 tackles and made multiple key third-down stops to force punts. With 7:30 remaining in the game, and his team up 21-9, Hooker made an open-field tackle on Rams’ running back Darrell Henderson on third and three, stopping him a yard shy of the first down.

Then, the Rams failed to convert on fourth down as Stafford threw an incompletion.

“It was absolutely critical,” Vrabel told media in Los Angeles regarding Hooker’s tackle. “I think Amani worked his way through the [mix of players]. They probably tried to pick him off, and he made a fantastic tackle … It was a huge play.”

Hooker’s eight solo stops and 12 total tackles were both career-highs for the third-year pro.

Offensively, Adrian Peterson, yes, that Adrian Peterson, scored the 125th touchdown of his career. The Titans added Peterson after it was announced Derrick Henry would be out for the rest of the season.