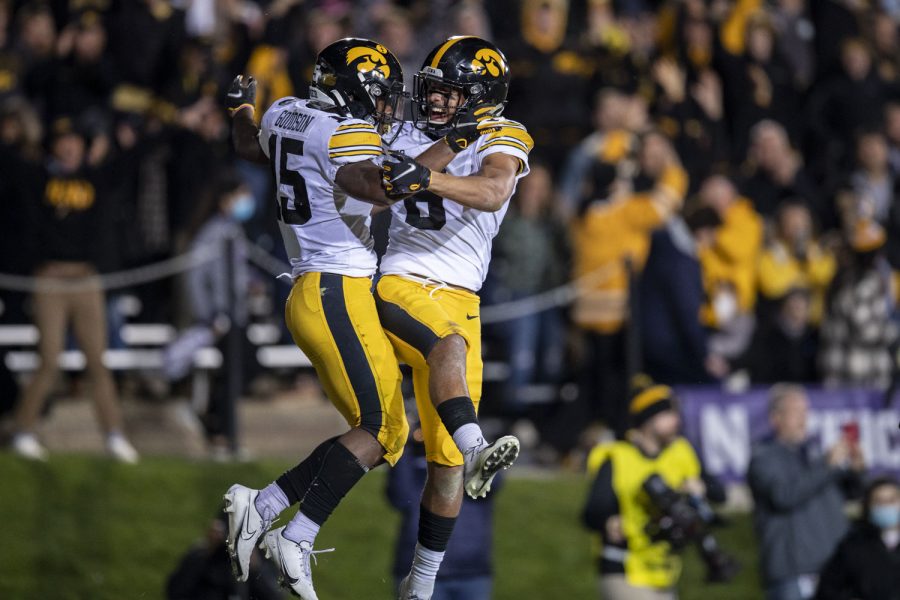 Iowa running back Tyler Goodson and quarterback Alex Padilla celebrate after a touchdown during a football game between No. 19 Iowa and Northwestern at Ryan Field in Evanston, Illinois, on Saturday, Nov. 6, 2021. Padilla replaced starting quarterback Spencer Petras during the first half. (Grace Smith/The Daily Iowan)

EVANSTON, Ill. — The No. 22 Iowa football team leads Northwestern, 14-3, at halftime of the primetime matchup between the two teams at Ryan Field.

After the Hawkeyes picked up only one first down over their first three offensive drives, backup quarterback Alex Padilla entered the game and replaced starter Spencer Petras. Padilla led two scoring drives and is 12-0f-18 for 127 yards so far. Tyler Goodson ran for a 13-yard score — his first touchdown on the ground since September — that put the Hawkeyes on the board, while freshman wide receiver Arland Bruce IV broke through tackle for a 10-yard scoring run of his own on the next drive.

Northwestern scored a field goal after blocking a Tory Taylor punt late in the second quarter. DI Pregame Editor Robert Read and Sports Reporter Chris Werner are in the press box at Ryan Field covering the game for The Daily Iowan. Here are their reactions to the first half.

Something needed to change, and it did

Before Petras was taken out of the game, Iowa’s last 30 offensive drives (including three on Saturday) had led to 14 points, 27 first downs, five interceptions, one lost fumble, four turnovers on downs, one missed field goal, and 15 punts. Petras was 2-of-4 throwing for four yards before exiting the game.

But Padilla seems to have provided a spark to Iowa’s offense.

The sophomore is connecting with receivers downfield — particularly Keagan Johnson, who has four catches for 61 yards so far.

It’s unclear whether Petras left because of his performance or an injury. The second-year starter left last week’s loss to Wisconsin with a shoulder injury. Petras didn’t look right while he was on the field, throwing a couple of passes right into the dirt. Either way, it seems as if though Iowa has found its new starter under center. Padilla looks more comfortable than Petras ever has during his stint as Iowa’s starter. Plus, he’s throwing the ball downfield, which sounds simple, but has been missing from Iowa’s offense of late.

Northwestern’s defense isn’t great, but it’s encouraging to see Iowa’s offense move the ball a little bit. Some sort of move had to be made after back-to-back ugly losses. And it seems like that change was putting Padilla in the game. That move is paying off so far.

Goodson back on track

In Iowa’s last two games — at home against Purdue and in Madison on the road at Wisconsin junior running back Tyler Goodson totaled 95 rushing yards.

After 30 minutes, the preseason All-Big Ten selection has 100 yards on the ground and a touchdown. The Hawkeyes lead the Wildcats 14-3.

Iowa fans and media speculated that Northwestern’s sub par rushing defense could provide a good opportunity for Goodson to get back on track. They were right.

Goodson has toted it 13  times, averaging 7.7 yards per rush including a 41-yard burst early in the second quarter. His touchdown run was good for 13 yards.

With usual second-string tailback Ivory-Kelly Martin sidelined with an injury, redshirt freshman Gavin Williams has seen his first substantial playing time of the season. Williams had four rushes for 23 yards.

Goodson and Williams have each been productive in the passing game as well. The duo have combed to catch three passes for 20 yards.

The Hawkeyes’ other score also came on a rush as freshman Arland Bruce IV took a jet sweep six yards for a touchdown.

Iowa’s best rushing performance of the season came in Week 3 against Kent State tallying 206 yards on the ground. The Hawkeyes need 79 yards in the second half to set a new season-high.