After a first-round bye, the top-seeded Hawkeyes lost to fourth-seeded Michigan, 3-2, in the semifinals. 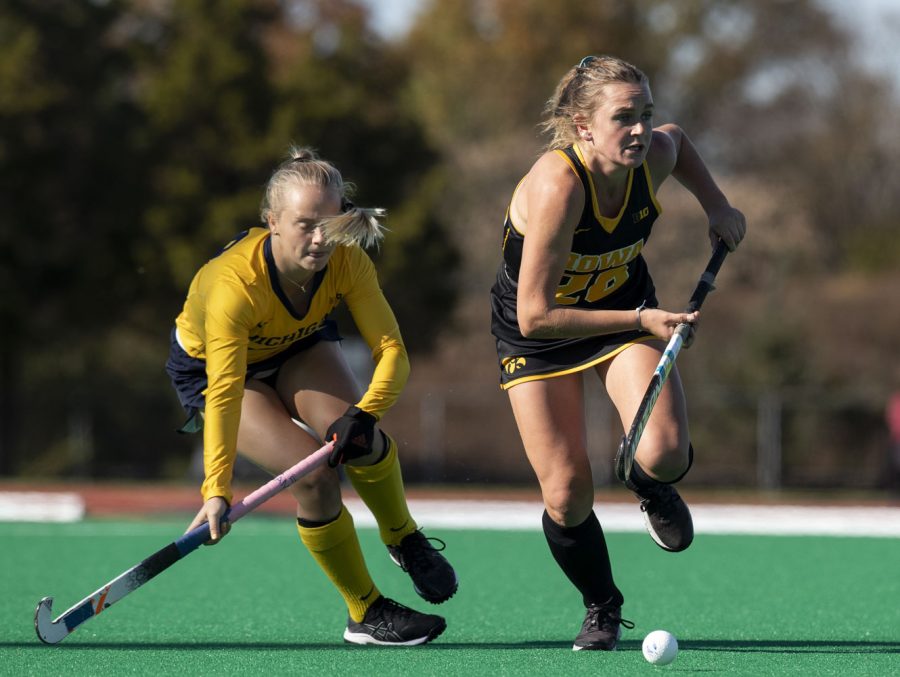 The fall 2021 Big Ten regular season champions are now out of the conference tournament, as Michigan and Rutgers will meet in the finals on Sunday.

The Wolverines started the game strong, scoring off their first shot of the match four minutes in. However, Iowa quickly responded, as senior forward Leah Zellner scored off a deflected shot from fifth-year senior Maddy Murphy three minutes later.

But the lead didn’t last long for Iowa, as Michigan’s Sofia Southam scored her 20th goal of the season before the end of the first quarter.

The only three shots between the Hawkeyes and Wolverines in the first half were the three goals scored.

Things ramped up in the second half, as fifth-year senior midfielder Nikki Freeman tied the score at two midway through the second quarter.

In the fourth quarter, Michigan notched the game-winning goal on a controversial play. Southam appeared to foul Hawkeye goalkeeper Grace McGuire in the buildup, but referees upheld the goal after reviewing the play.

“From our perspective we thought it was a foul, but the call did not go our way,” head coach Lisa Cellucci said postgame.

In a late push, Iowa created three penalty corner chances in the final period, but could not find the back of the net.

“It was really disappointing because we showed up with great energy and were ready and then we started really slow,” Cellucci said. “It was unfortunate because you cannot start slow against Michigan, and as a result we played into their hands.”

After winning its first 16 games of the season, Iowa has dropped to 16-2.

The back-to-back losses may affect Iowa’s ranking in the National Field Hockey Coaches Association Poll. Throughout the back half of the regular season, Iowa has been ranked No. 1.

The Wolverines’ clinical ability gave them the victory over Iowa. The Hawkeyes surrendered just four shots and one penalty corner on the day, but Michigan converted three of its shots.

Iowa converted both of its shots in the first half, but could not find the back of the net with three penalty corners and four shots late in the match.

“They are two of the best teams in the country and are savvy finishers,” Cellucci said. “We thought our defense would stand tall, but it just took us too long to get going.”

After the Hawkeyes kept a program record eight consecutive shutouts this season, Iowa has conceded five goals in its past two matches.

Iowa’s five conceded goals is the most in a two-game stretch since the end of the 2018 season.

“We did not flip our mindset until they scored on us,” Freeman said. “And that flip of the mindset has to come from the start.”

Iowa will now have to rely on an at-large bid to advance to the NCAA Tournament. The selection show will air at 9 p.m. on Sunday night.