The Hawkeyes will boast multiple fifth, sixth, and seven-year seniors on their roster this season. 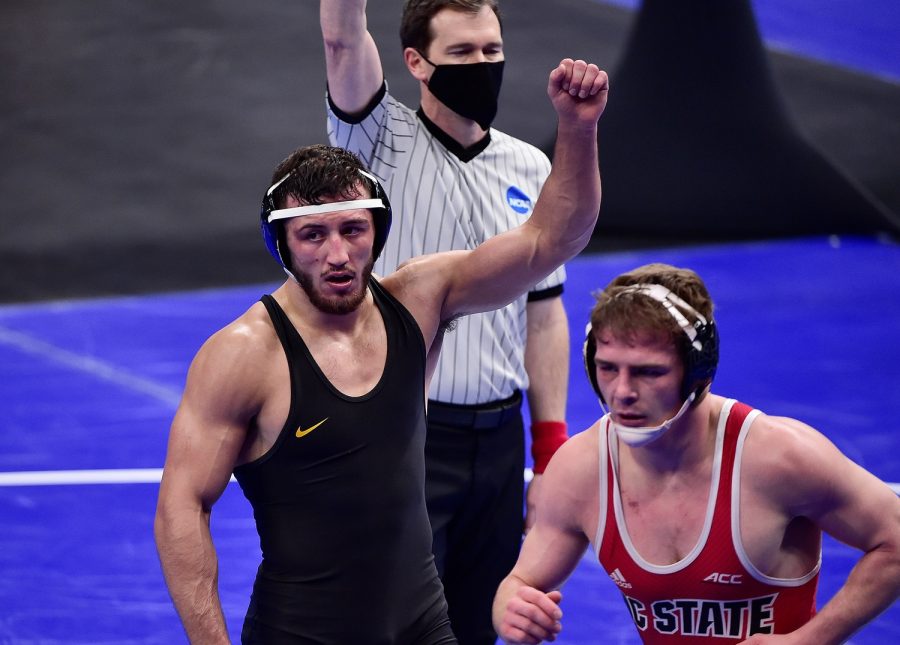 The Iowa men’s wrestling program won its first team national championship since 2010 last year. Now, all 10 of the Hawkeyes’ starting wrestlers from 2020-21 are back for 2021-22.

Many of the Hawkeyes’ starters were seniors last year. All of them can return to the University of Iowa to wrestle another season because the NCAA granted all its 2020-21 athletes an additional year of eligibility because of COVID-19.

Iowa head coach Tom Brands believes that while the choice was easy for some of them, the team chemistry and family-like atmosphere helped convince those on the fence to stay in Iowa City for another season.

“The ones that maybe it wasn’t easy for, it was quick,” Brands said of his wrestlers’ decisions to return to the team. “I thought that it might take a little bit longer. But remember that, when you use the word brotherhood, and culture, and camaraderie, and things like that, those words that are all synonyms of togetherness — I think it probably made it easier than if they weren’t together.”

Two of the Hawkeyes’ elder statesmen, Marinelli and Kemerer, each decided to return to Iowa for a chance to spend one more season in the Black and Gold. This year will be Marinelli’s sixth at Iowa, and 2021-22 will be Kemerer’s seventh.

“Very, very easy decision to come back for that sixth year,” Marinelli said. “I think I haven’t accomplished what I need to do. So, I think I would regret not coming back and giving myself that chance.”

Marinelli has collected three Big Ten individual titles. Yet, he hasn’t found much success at the NCAA Tournament. He’s even been the top seed at his weight, 165 pounds, in each of the last three NCAA Championships.

Nicknamed “the Bull,” Marinelli is a four-time All-American. He’s lost just one regular season match in the last three years.

Marinelli enters the 2021-22 season ranked third in the country at 165 pounds.

Marinelli compared the chance to wrestle one more season for Brands to a lottery ticket.

Kemerer will be 25 by the time the 2021-22 season ends. Like Marinelli, Kemerer has wrestled well in the Big Ten tournament, but come up short in the NCAA tournament.

Kemerer said Lee asked him to come back for the 2021-22 season soon after the 2020-21 NCAA Championships ended.

“Everyone was gonna respect whatever I did,” Kemerer said. “That’s just kind of the type of people they are. I remember talking to Spencer that night of the finals. He came up to me, talked to me. He had already won. He didn’t have to do that. He said that he wanted me back. Guys said they wanted me back.”

Kemerer said he mulled over the decision for about three weeks. Ultimately, Kemerer couldn’t turn down the opportunity to return to Iowa and wrestle in 2021-22.

“I feel like, being an Iowa wrestler, it’s the best job in the world,” Kemerer said. “Seeing these guys come back and being able to have another year of these experiences. I mean, these are things I’m going to remember and take with me the rest of my life. So, just how can I pass up a chance to go to battle with these guys?”