Hawkeye Elvis, who is Greg Suckow, has been growing a fanbase at the University of Iowa since 2010 after he first wore his custom-made, sparkly Elvis jumpsuit. 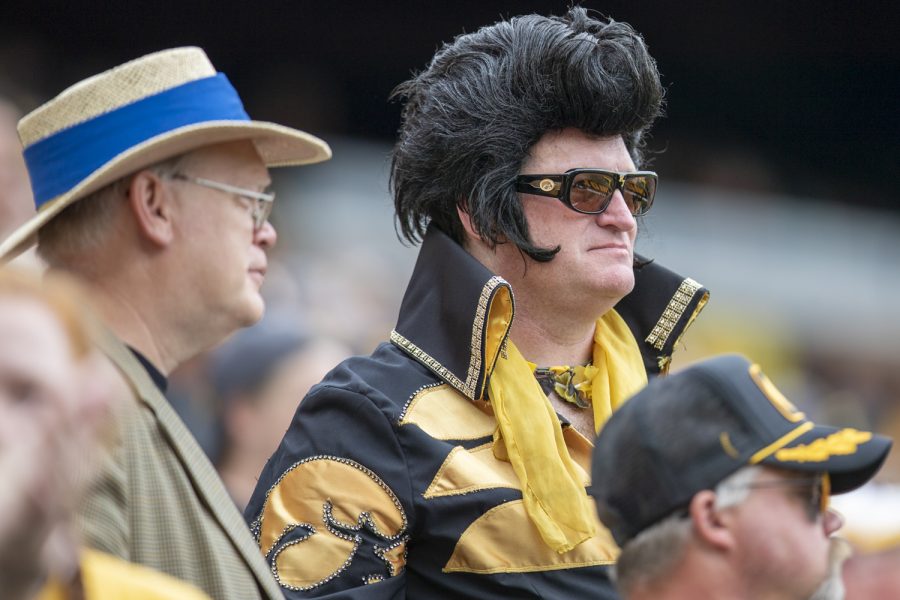 Greg Suckow, also known as Hawkeye Elvis, watches the action during a football game between No. 18 Iowa and No. 17 Indiana at Kinnick Stadium on Saturday, Sept. 4, 2021. The Hawkeyes defeated the Hoosiers 34-6.

Hawkeye Elvis has amassed over 13,500 followers on Twitter since he first donned a sparkly, black and gold jumpsuit in 2010. But the man behind the rhinestone-adorned Elvis costume, Greg Suckow, never thought he would gain a following.

Suckow wore the costume for the first time at a Halloween game at Kinnick Stadium, after seeing several Hawkeye-themed costumes at a game the year prior.

“There was like Hawkeye Darth Vader and Hawkeye Batman and all that stuff, and I thought it’d be fun to do a Hawkeye Elvis theme for next year,” he said.

After that game, Suckow said he asked his mom to create a Hawkeye Elvis jumpsuit.

“If [my] mom hadn’t worked for the Department of Transportation for 25 years, she could have easily gone to Hollywood and worked in the costume department,” he said.

Suckow’s mom worked on the first jumpsuit on and off for a year, he said, however, she felt she could do better and has made four jumpsuits since.

“She created the pattern, designed it and then made the first jumpsuit and then I think it was a year or two later she’s like, ‘You know what, I think you need another one,’” Suckow said.
Growing a fanbase
Suckow said his fanbase grew over Twitter, where he has interacted with Hawkeye fans over the last decade.

“Twitter’s a game,” Suckow said. “Once you sort of learn how to play it and get good at it, you can tell who the people are that are good at Twitter.”

Tyler Reihmann, a friend of Suckow, said he bonded with him on Twitter.

“It was kind of neat to see somebody else that was also active on social media kind of have a similar mindset,” Reihmann said.

Reihmann said Suckow spreads positivity and commentary, even if the games do not go Iowa’s way. He said Suckow is a positive and inclusive person.

Suckow said the connections he has made over Twitter have helped him over the years grow his network.

“I’ve really developed some really close friendships with people that I’ve met on Twitter,” he said. “My tailgating spot on Melrose, I’m in that spot because of my Twitter friends.”

Anne Edwards, another friend of Suckow’s, attributes his personality to the growing fanbase.

“He has fun with it,” Edwards said. “He doesn’t take himself too seriously when he’s in his Elvis costume. He’s just an all-around great guy.”

Edwards said she hosts a tailgate near Suckow and often sees fans stop by.

“There’s a lot of people who will stop in or people from even opposing teams will stop and go ‘I need to get a picture with him’ and he’s always accommodating,’” she said.
Games during COVID-19
Unlike many Hawkeye fans, during the 2020 – 2021 season, Suckow was able to attend some basketball games because of his ties to the University of Iowa.

Men’s Basketball Head Coach Fran McCaffery’s wife, Margaret McCaffery, is Suckow’s cousin, and gave Suckow access to some of the basketball games. He has also built a relationship with Frank Garza, former Iowa Men’s basketball player Luka Garza’s father. Suckow said this started because he sits with players’ parents at the Iowa-Minnesota game annually. Suckow said he lives in Minnesota.

“I’ve had long, deep ties with Iowa basketball,” Suckow said. “Between Margaret or Frank, I would get in on the family pass list.”

Suckow said the games he attended last spring were much quieter than what he was used to.

“You could hear everything on the court, which was both enlightening and a little bit hilarious at times,” Suckow said. “You can hear everybody yelling — players, coaches, refs and people in the stands.”

Suckow attended the first Big Ten tournament in spring 2021 in Indianapolis against Wisconsin in March, where the crowd was larger than it had been the entire season.

“You could tell what a difference it made to the players to have people in the stands,” Suckow said.
Opportunities arising
Suckow said he has great memories of being Elvis over the years and has experienced many unique Hawkeye events.

“I got to do the Homecoming halftime show a few years ago, in 2015,” he said. “The band did an Elvis medley. And I went out and did a whole dance routine with Herky and the dance team, and it was just so much fun.”

This year, Suckow walked in the Homecoming parade.

“I’ve never been there for the Homecoming parade,” Suckow said. “I was blown away by the number of people who are out there to watch that and cheer and wave.”

As Suckow’s fanbase grows, so has his significance to the Hawkeye community, Edwards said.

“I think he’s become kind of an icon when it comes to Hawkeye sports and people,” she said.

Suckow said he will continue to be Elvis until people get tired of it.

“I’m still amazed that it’s been this long, and people are still excited to see me when I’m dressed up at a game,” Suckow said. “People still want their picture with me, which blows me away.”

Reihmann said as Suckow’s popularity grows, Herky the Hawk may have some competition.

“Elvis may start encroaching on Herky’s mascot spot for [the] Iowa Hawkeyes,” he said.