During his second 2021 visit to Iowa, Former Vice President Mike Pence spoke to Iowa City residents and University of Iowa students about how young people should prioritize the Constitution in order to protect their rights. 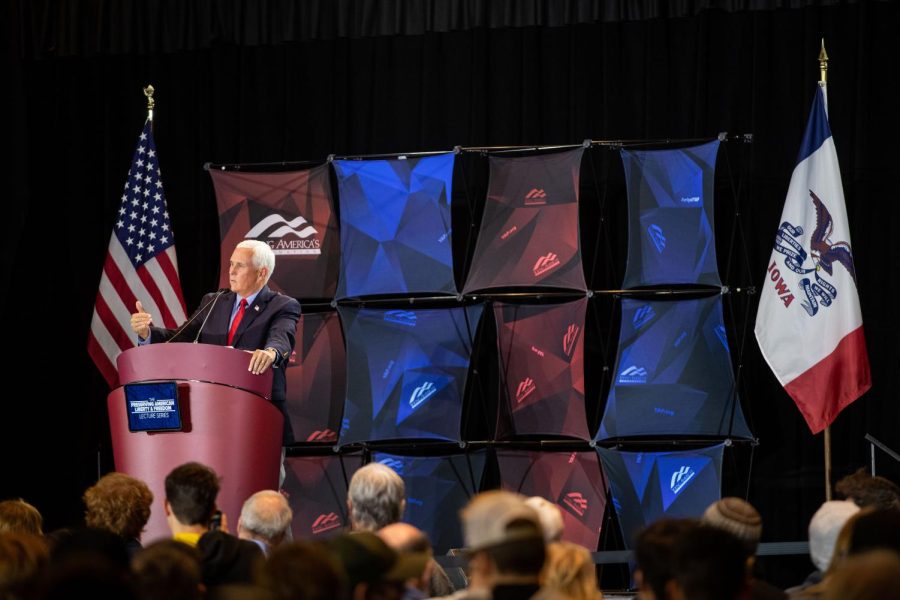 Former Vice President Mike Pence addresses a crowd during a Young Americans for Freedom event at the Iowa Memorial Union main lounge on Nov. 1, 2021. Pence was the main speaker at the event. Pence gave a speech about protecting the United States Constitution from the current administration’s left-leaning values.

Young America’s Foundation — and the University of Iowa chapter of its campus project, Young Americans for Freedom — hosted the event where Pence talked about bringing conservative values back to the U.S. Roughly 450 people attended, and around 250 chairs set up in the Iowa Memorial Union’s Main Lounge were empty.

“We need you to be the freedom generation by wrapping your mind and heart around the founding documents of this country. These are the greatest charters for freedom in human history,” Pence said.

Members from across the community and across the aisle attended the event. Some sported MAGA hats while others were in attendance in opposition.

One attendant asked who convinced him to certify the 2020 election results after rioters stormed the U.S. Capitol in an attempt to shut down the electoral count.

“James Madison,” Pence responded, adding that any claims that someone from inside the White House convinced him to go against the former president were false.

Camille Tuttle, a 25-year-old Iowa City resident, said she attended to learn more about the different political sides in the city, as someone who is new to town.

Tuttle said she thinks Pence is making an appearance in Iowa because there are a lot of conservative views in the state, especially with the older crowd.

“I think it’s cool though. Most of the crowd here is young people and I can see that and that’s exciting,” Tuttle said.

Former President Ronald Reagan was much of the inspiration behind this event, Pence said. Pence said that he looked up to Reagan as a public servant.

“Our freedoms are never more than one generation away from extinction,” Pence said, which is a commonly said Reagan quote.

In the room of mostly college-aged people, Pence said conservatives face adversity for sharing their beliefs but encouraged attendees not to let that scare them.

“There is a perception among young people that adversity builds character, but actually, adversity reveals character,” Pence said.

Pence reminisced on the presidency of former President Donald Trump as he condemned the Biden administration for its handling of the economy, inflation, and vaccine mandates.

The former Vice President said that under Trump, the country responded to the pandemic in a way that should make Americans proud as three effective vaccines were developed. Pence said that vaccines should not be required but instead everyone should choose whether they want to take them.

Pence worked to certify the results of the election on Jan. 6 during the insurrection and attendees threatened his life, accusing him of treason and betrayal of President Trump.

This is the second visit Trump has made to Iowa this year. He attended the Family Leadership Summit in Des Moines this summer to talk about his pro-life values.

Pence said he was disappointed in the way the Biden administration scrapped the 1776 commission, which Trump created to promote “patriotic education” that prioritized American exceptionalism in public schools.

Pence said the new administration is pushing what he called critical race theory, which he said causes children to grow up ashamed of their skin color.

“Critical race theory is nothing other than state sponsored racism and should be rejected by every parent in every school of every race,” Pence said.

Though there has been nationwide push back against critical race theory in school districts, the theory is rooted in legal academia and not widely taught in K-12 education.

Pence criticized the Biden administration for how they expanded unemployment benefits which he said encouraged people to not go back to work. Gov. Kim Reynolds recently signed a law to allow those who are fired for not complying with vaccine mandates eligible for unemployment.

Michael Kazma, a 19-year-old first-year at the UI, said he didn’t know much about Pence before the event, but respects the Republican values he represents. He said the event exemplified exactly what Pence’s message was about — encouraging young people to promote conservative views.

“I think most college campuses lean liberal, and I think that’s what his whole message was about, I think this is appropriate,” Kazma said.

Pence has not yet announced plans to run for office.

Evan Weidl, a UI sophomore, attended the event and lost his temper with the former vice president as he shouted ‘Don’t Lie!’ in response to Pence talking about the increase of the debt ceiling.

Audience members boo’d Weidl for his outburst and he was escorted out of the main lounge.

Weidl said that many Americans have the mindset that wanting to see change in the government means that they hate their country or are any enemy of it, but in reality, he said, people should be open minded to improving the government.

“That’s kind of the poison of American exceptionalism is that it drives people to see any change is a threat to the very survival of the nation,” Weidl said. “And, you know, I think that rhetoric really needs to be changed.”