Over the past two months, multiple schools and departments within the University of Iowa drafted COVID-19 statements asking for mask and vaccine mandates. 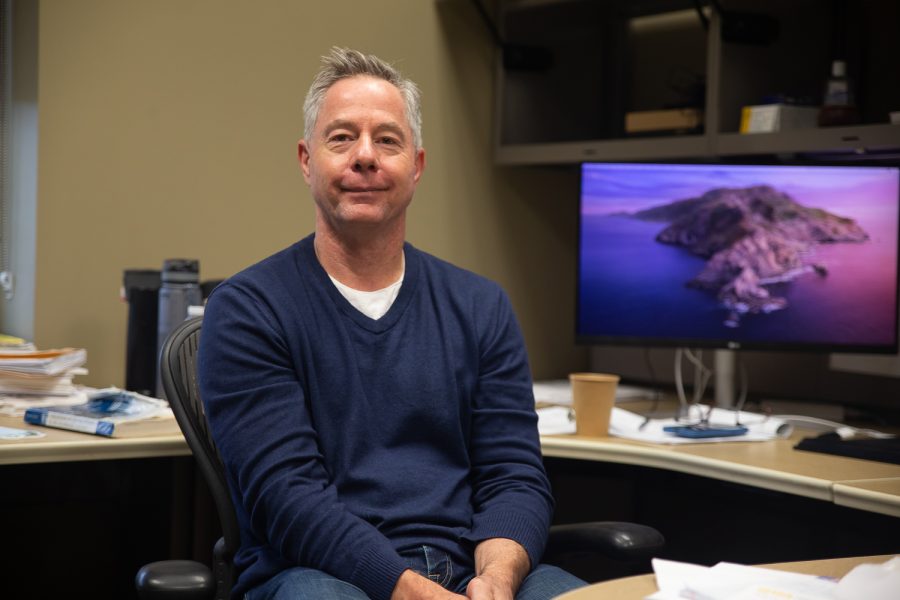 University of Iowa Professor David Ryfe poses for a portrait in the Adler Journalism and Mass Communication Building on Friday, Oct. 29, 2021.

Multiple departments and schools at the University of Iowa have released statements encouraging UI administration and the state Board of Regents to implement campus-wide vaccine and mask mandates.

The UI Department of Communication Studies released a statement on Facebook on Sept. 16, highlighting its support for Iowa City Mayor Bruce Teague’s mask mandate — which was extended indefinitely as of Sept. 29 — as well as the U.S. Department of Labor’s mandate requiring workers to be vaccinated or undergo weekly testing.

“We support these guidelines because mandating vaccines or serial testing, and universal masking is the best way to mitigate risks associated with COVID and to ensure equal access to space of learning and work,” the statement said.

Kembrew McLeod, chair of the communication studies department, said the statement was the result of concern among his faculty about a lack of mask and vaccination mandates and feeling like they didn’t have the support of UI administration.

McLeod said, what matters to him is if there’s a mask or vaccine mandate.

“In the absence of [mandates], my faculty decided to make a public statement asking the university and the Board of Regents to follow the recommendations of scientists in terms of how to avoid the spread of COVID,” McLeod said.

The regents do not require masks or vaccines on Iowa’ three public college campuses, and those universities cannot impose their own mandates. The UI strongly encourages masks, and provides masks and hand sanitizer in campus buildings, among other measures.

UI faculty in the Department of Communication Studies drafted their statement and voted on it, McLeod said.

“I think the fact that statements have been produced by different departments and schools and other units at the University of Iowa shows broad consensus that we should be following scientific recommendations,” McLeod said.

McLeod said the College of Liberal Arts and Sciences responded stating that the department would have to follow the regents’ guidance.

“As a department chair who wants to make life as good as possible for my colleagues, I felt like it was really important for our departments to add our voices to the conversation and emphasize that we should be following scientific recommendations,” McLeod said.

On Oct. 18, the UI School of Journalism and Mass Communication released a statement that the faculty and staff “unequivocally endorses the recent statement of the Department of Communication Studies.”

The statement called on leaders of the university and the regents to immediately adopt a mask mandate and the leaders to strongly advocate for a vaccine mandate.

David Ryfe, director of the UI School of Journalism and Mass Communication, said the school’s faculty endorsed the Department of Communication Studies’ statement and added their own statement, too.

He said faculty voted on the statement in their October faculty meeting.

“They felt like it was important to be on the record at this moment because we’re in a historical moment,” Ryfe said. “These pandemics don’t come around often, and it’s relatively rare for a state to have adopted policies that contradict the scientific evidence as we know it today.”

Ryfe said the statement was written more for posterity than trying to actually change policy.

“I don’t think we’re naive enough to think that a statement from one academic unit is going to change anyone’s mind about those issues, but it can be symbolically important for the community to express its collective voice for the future,” he said.

Loren Glass, chair of the UI Department of English, said his faculty originally wanted to make stronger rules regarding COVID-19 in the department, but he believed it would not be allowed, so he suggested a statement instead.

“I felt like a statement on the website, in a way, had a double meaning,” Glass said. “It was expressing our position about this, but it was also expressing our right to state the position. The college cannot tell us that we can’t say this.”

He said the department’s faculty felt that their autonomy was also being violated, and they should be able to determine what is the best way to deliver an English education.

“The truth is, we are all one university, but we’re also a bunch of different colleges and departments that teach different things in different ways,” Glass said. “There’s a reason that we’re set up as departments with a lot of autonomy to run things as we want.”

Overall, Glass said he feels the faculty continue to be in an unnecessarily risky teaching and learning environment, where people have lost their sense of caring for others.