Opinion | The Iowa offense is bad, and it might not be getting any better

Iowa's offense could only muster 156 yards in its 27-7 loss to Wisconsin in Madison. 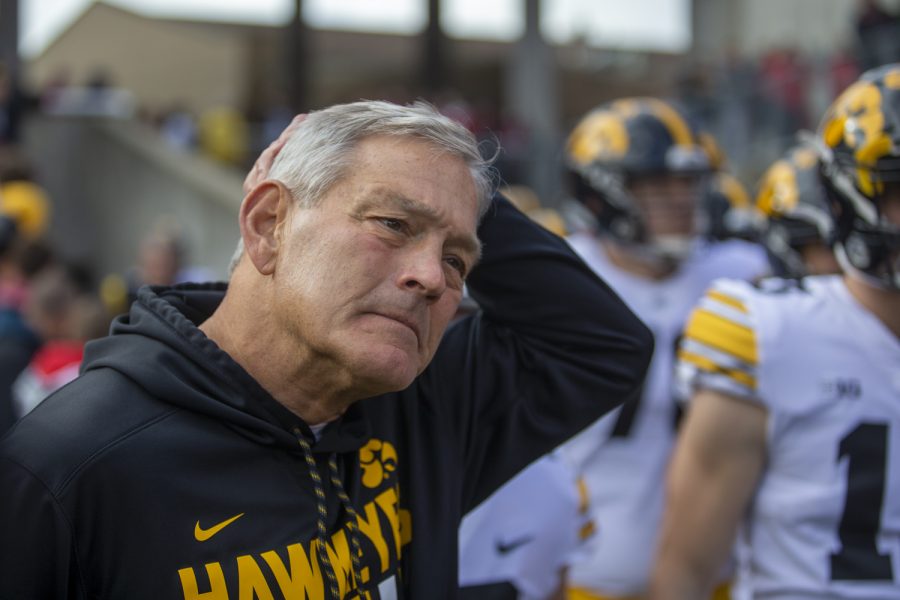 Iowa head coach Kirk Ferentz enters the field before a football game between No. 9 Iowa and Wisconsin at Camp Randall Stadium on Saturday, Oct. 30, 2021. The Badgers defeated the Hawkeyes 27-7.

MADISON, Wis. — Kirk Ferentz smirked and let out a somber laugh at the postgame podium when he was informed that Iowa fans weren’t thrilled over the Hawkeyes’ offensive output in a 27-7 loss to Wisconsin on Saturday.

“I’m sure we’ll get plenty of suggestions on how to fix our issues,” Ferentz said.

Frankly, the Hawkeyes could use any help they can get.

Iowa’s offense entered Week 9 ranked 119th out of 130 FBS teams. Somehow, that ranking is going to plummet even further after a 156-yard performance (keep in mind a good chunk of those yards were gained in garbage time) at Camp Randall Stadium. Oh, and there’s more to say about Iowa’s offense than just its lack of yardage.

The then-No. 9 Hawkeyes (6-2 overall, 3-2 Big Ten) didn’t pick up a first down until the final minutes of the first half. Iowa’s offensive line allowed six sacks and 10 tackles for loss on the day and could only provide enough space up front for 24 rushing yards on the day. Play calling wasn’t on point either — not that that’s necessarily a surprise — particularly on a fourth-and-short fullback dive that didn’t convert.

Then there are the turnovers — three of them, to be exact. And all three fumbles (one on a strip sack, one on a miscommunication on a handoff at Iowa’s own 1-yard line, and one on a muffed punt) set Wisconsin (5-3, 3-2) up inside Iowa’s 20-yard line.

Iowa’s turnover margin has been minus-three in losses to Purdue and Wisconsin.

In those back-to-back double-digit defeats — a first for the program since 2013 — the Hawkeyes have been outscored, 51-14.

“We’re not moving the ball consistently enough and, I mean, go right down all the lists of reasons,” Ferentz said. “It’s like anything, you just continue to learn more about your players as the season goes on. What they can do, can’t do and then we’ve got to figure out a better way to plan to give them a better chance.

“I don’t think there’s any one specific reason right now. We’re just not executing well enough to get the job done and get the ball moved with consistency.”

Questions surrounding Iowa’s offense have plagued the Hawkeyes all season. But when Iowa was winning (with a lot of help from the defense forcing turnovers), its flaws were easy to ignore. After consecutive losses in which the Hawkeyes could only muster seven points in each game?

Only three weeks separated perhaps the best win of Ferentz’s 23-year tenure as Iowa’s head coach from possibly the Hawkeyes’ ugliest loss in that same stretch. Hawkeye fans stormed the field at Kinnick Stadium after Iowa’s comeback win over Penn State in a top-five matchup on Oct. 9. Wisconsin fans did the same thing on Saturday.

College football playoff aspirations have turned into needing assistance from other teams to even win the Big Ten West.

It was pretty clear Wisconsin had a typical Wisconsin defense pretty early in the game. But if you were waiting for any adjustments from Iowa’s offense coming off a bye week, well, just keep on waiting.

Wide receiver Charlie Jones said that, during the bye week last week, “We were just focused on things that we do.” Going back to the fundamentals didn’t seem to pay off.

And no scheme tweaks seem to be coming.

“We’re not inventing any plays,” said Petras, who finished with 93 passing yards and left the game in the fourth quarter with a shoulder injury. “It’s the same offense. We got beat, twice. We got outplayed, twice. That can’t happen.”

A season that at one point seemed like it was going to be a special one is looking like the latest example of Iowa coming up short of a West title. Sorry, Phil Parker and LeVar Woods, the Hawkeye defense and special teams are better than this. But the offense isn’t.

When asked postgame about fifth-year offensive coordinator Brian Ferentz, his father said he remains confident in the entire coaching staff. You can be mad at that answer, or you can just accept that nothing major is going to change on that side of the ball for the Hawkeyes.

And as far as things staying the same, who is ready for another Outback Bowl?