Midterm campaigns ramping up one year out

The field of candidates has emerged in Iowa for many of the 2022 races, as redistricting shakes up congressional races and Iowa Republicans get attention from national figures. 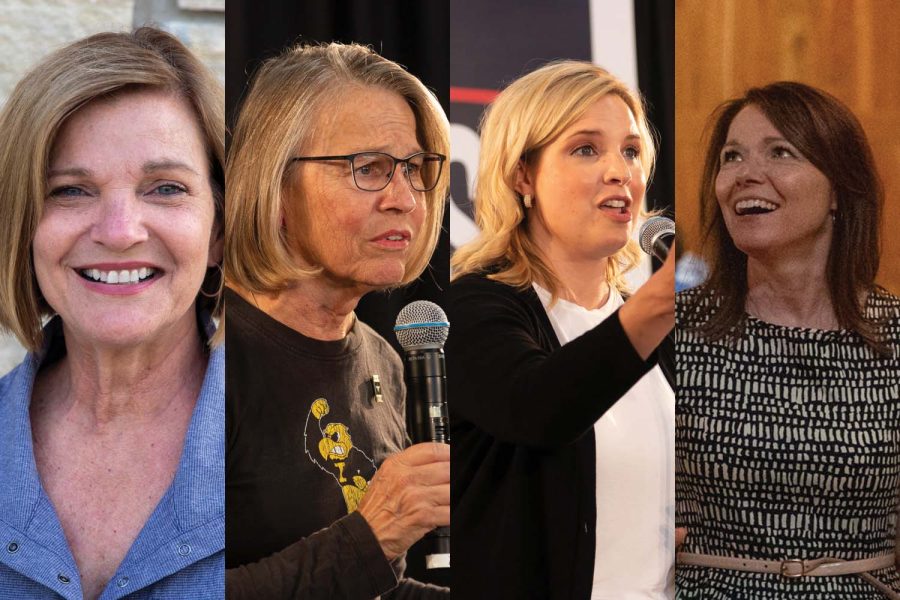 One year out from the 2022 midterm elections, those working to elect both Republicans and Democrats in Iowa say they have reason to be optimistic.

Iowa Republican Party Chair Jeff Kaufmann has invited several national figures in the party, such as Sens. Ted Cruz and Tom Cotton, to Iowa, to create excitement around elections, as well as promote Iowa’s first in the nation status for the Republican caucuses over the last several months. A few weeks ago at a rally in Des Moines, former President Donald Trump endorsed Sen. Chuck Grassley, R-Iowa, and indicated he planned to endorse Iowa Gov. Kim Reynolds.

Kaufmann said these events are mutually beneficial because they provide a platform for potential 2024 presidential hopefuls, while garnering support for Iowa’s elected officials seeking reelection in 2022.

On the Democratic front, candidates are running on a record of success at the national level, said Mara Kunin, Midwest political director at the Democratic Congressional Campaign Committee, a political committee focused on electing Democrats to the U.S. House.

Iowa saw a shift in the partisan makeup of its Congressional delegation in 2020. The state went from having three Democratic House representatives and one Republican to one Democrat and three Republicans. Additionally, Sen. Joni Ernst, R-Iowa, beat a challenge from Democrat Theresa Greenfield, despite Greenfield outraising Ernst.  Trump won the state with 52.80 percent of the vote in 2020.

Though there have been recent Republican wins in the state, Kunin said Democrats are well-positioned to take up the message of economic stability, creating jobs, ending the pandemic, and advocating for justice for Americans in the upcoming election.

“We are forward-looking, we are very confident. And we’re exceedingly excited for this upcoming election,” Kunin said.

Kaufmann said, with a year to go to Election Day 2022, Iowa voter registration numbers and polling about Trump, Biden, and the parties are encouraging for Republicans.

“And then of course, you know the old adage — and it usually turns out to be true — and that is that during a midterm election, the party of the president in power doesn’t fare very well,” Kaufmann said. “So you add everything together, I’m not willing to say this is a perfect storm, but I’m willing to say that there’s some really odd-looking clouds in the sky.”

Kaufmann said he’s spoken with U.S. House Minority Leader Kevin McCarthy, R-California, about Iowa being a focal point in taking back the U.S. House. Democrats currently hold a narrow majority in the House, with 220 members compared to Republicans’ 212.

Kaufmann said the party wants to be competitive in all four of the newly-drawn districts, and that the 4th Congressional District is a “slam dunk.”

“We obviously hope to retain the three incumbents we have now, and we will pour everything we have into the 3rd District,” Kaufmann said.
The Candidates
Grassley, Iowa’s longest-serving senator, announced in September that he would seek an eighth Senate term. Grassley, 88, began his career in politics in 1959 when he was elected to the Iowa House of Representatives.

“When you consider what Biden’s policies have been — just think, inflation, the taxes spending spree, how people are treated, leaving Americans in Afghanistan and the crisis at the border that you see on TV every day — You need Republicans back in control.,” Grassley told The Daily Iowan in a press call. “And right now, although I’m saying this understanding that in the next 12 months a lot can happen, but it looks like a pretty darn good environment for Republicans to win, sweep, in Iowa in 2022.”

In 2016, Grassley won reelection with 58.56 percent of the vote against Democratic challenger Patty Judge.

Grassley’s most high-profile challenger is former Rep. Abby Finkenauer. In 2018, Finkenauer unseated Republican incumbent Rep. Rod Blum with 50.46 percent of the vote and became one of the youngest women ever elected to the U.S. Congress. Finkenauer served one term representing Iowa’s 1st Congressional District and lost her 2020 reelection bid to current Rep. Ashley Hinson, R-Iowa. In 2020, Finkenauer received 47.49 percent of the vote.

Hinson, a former television news anchor, announced in August that she will seek reelection.

Rep. Randy Feenstra, R-Iowa, launched his reelection bid for the 4th Congressional District seat two weeks ago. Another House Freshman, Feenstra won in 2020 with 59.12 percent of the vote, after defeating incumbent Rep. Steve King in the Republican primary.

No candidates have announced they will challenge Feenstra in 2022.

Rep. Mariannette Miller-Meeks won by six votes in 2020 and has declared her intention to run again, though which district she plans to run in is yet to be seen.

University of Iowa law Professor and Iowa House Rep. Christina Bohannan, D-Iowa City, announced her candidacy for Iowa’s Southeastern district in August. Bohannan is currently serving her first term in the Iowa House. She won the Democratic primary race for her House seat in 2020 against Vicki Lensing, a 20-year incumbent.

Iowa’s six-member congressional delegation is majority Republican, with the exception of Rep. Cindy Axne, D-Iowa, who is serving her second term as a member of Congress. Axne is the only Iowa representative up for reelection who hasn’t announced an intent to run, and she has publicly considered pursuing the gubernatorial race.

Three Republicans have announced their candidacy in Axne’s district: State Rep. Mary Ann Hanusa, State Sen. Zach Nunn, and Nicole Hasso.
Redistricting shake-ups
After delays because of the pandemic and Iowa Republican senator’s rejection of the first set of maps, Iowa voters now know the state’s political boundaries for the next decade. Both chambers of the Iowa Legislature passed the Iowa Legislative Services Agencies’ second redistricting plan on Thursday in bipartisan and nearly unanimous votes.

“We have the most competitive maps we could have hoped for, and we think this will really help us as we deliver seats in Iowa’s 1, 2, and 3,” Kunin said.

The congressional map kept Feenstra and Axne in their current districts, but Eastern Iowa candidates have shuffled around. Hinson and Mathis will now face off in Iowa’s new 2nd Congressional District, and Bohannan, with Johnson County now in the 1st District, will campaign for that seat.

“I’m thrilled that our state upheld our fair and nonpartisan redistricting process,” Bohannan wrote in an email to the DI. “Now that we have a map, I’m looking forward to continuing to meet with folks in the new first Congressional district and tackling our toughest problems together.”

Miller-Meeks’ current address is in the new 3rd District.

“I have indicated that I will be a candidate for re-election,” Miller-Meeks said in a prepared statement shared on Thursday night. “I will be evaluating the new districts to determine my next step, which I will be announcing shortly.”