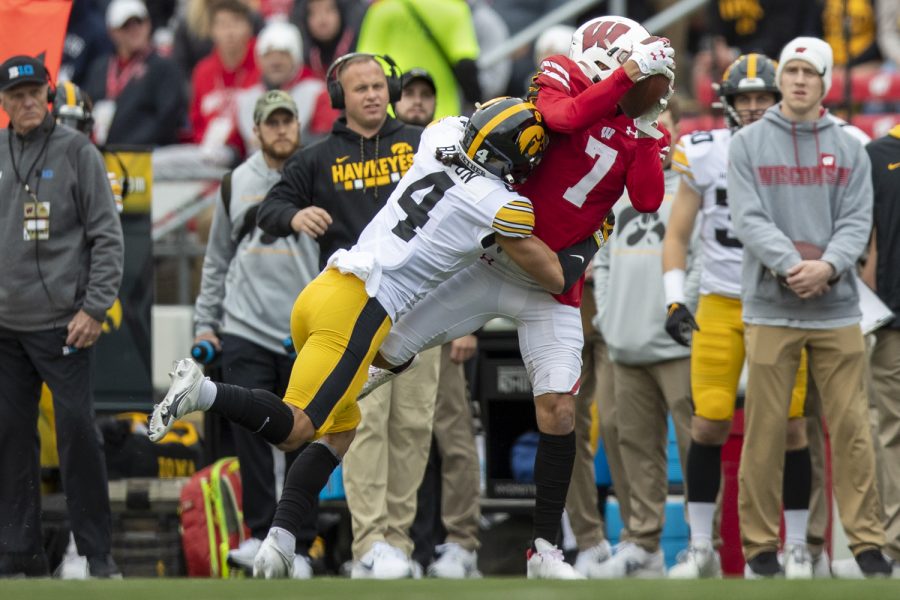 Wisconsin wide receiver Danny Davis III makes a catch over Iowa defensive back Dane Belton during a football game between No. 9 Iowa and Wisconsin at Camp Randall Stadium on Saturday, Oct. 30, 2021. Davis III averaged 11.8 yards per reception. The Badgers defeated the Hawkeyes 27-7.

MADISON, Wis. — Fans have stormed the field in two of Iowa football’s games this season. The first time the Hawkeyes had to fight through a sea of fans to get to the locker room was Oct. 9.

Then-No. 3 Iowa’s Oct. 9 game against Penn State was the biggest that had been played at Kinnick Stadium since 1985, when then-No. 1 Iowa took on then-No. 2 Michigan.

As the final seconds ticked off the clock in this year’s Iowa-Penn State game, fans began to realize the Hawkeyes had earned their most monumental regular season victory in about 25 years. Spectators started to file down the bleachers and push each other before they eventually spilled onto the field at the end of regulation.

The Hawkeyes’ record improved to 6-0 after their Oct. 9 matchup with the Nittany Lions. Iowa was ranked No. 2 in the Oct. 10 AP Poll.

A lot has changed since Hawkeye fans took to the turf at Kinnick Stadium three weeks ago.

When the final whistle was blown, Badger fans sprinted onto the field — just as Hawkeye fans had three weeks earlier in Iowa City — at Camp Randall Stadium to celebrate their now-5-3 squad’s upset win over then-No. 9 Iowa.

Since Oct. 9, the Hawkeyes have dropped from No. 2 in the AP Poll to No. 19 after losing to the Boilermakers and Badgers. Iowa has also fallen from first place in the Big Ten West Division to fourth.

Iowa was also firmly entrenched in the College Football Playoff conversation 23 days ago. Now, the Hawkeyes have been virtually eliminated from national championship contention.

“We’re 6-2 right now,” Hawkeye safety Jack Koerner said Saturday afternoon. “It feels pretty bad being 6-2 right now with how we started the season. We were 6-2 at the end of last season and feeling pretty good. We won six games straight after being [0-2] last season. So, I like to think that we can respond really well from this and finish out the season, because there’s plenty more to play for.”

Technically, the Hawkeyes can still win the Big Ten West if they win the four games that remain on their schedule.

If Iowa wins out, the Hawkeyes need help from Wisconsin and Purdue to claim the Big Ten West crown. Currently, the Boilermakers, Badgers, and Hawkeyes are tied for second in the division behind Minnesota.

The Golden Gophers boast a 4-1 conference record, while the Hawkeyes, Badgers, and Boilermakers trail them at 3-2.

If Iowa wins out, it’d make the Big Ten Championship Game over Minnesota, should Wisconsin and Purdue lose one more game each.

“I mean, everything’s still in front of us,” junior linebacker Seth Benson said. “We just gotta stay positive. We gotta keep coming in every day with a positive attitude. We just gotta make sure we keep everyone together, keep everyone going. We still got four games to play. No one should have their head down. Obviously, we’re disappointed. But there’s no reason not to be positive.”