Remember when Iowa was No. 2 in the nation? Seems like a long time ago. 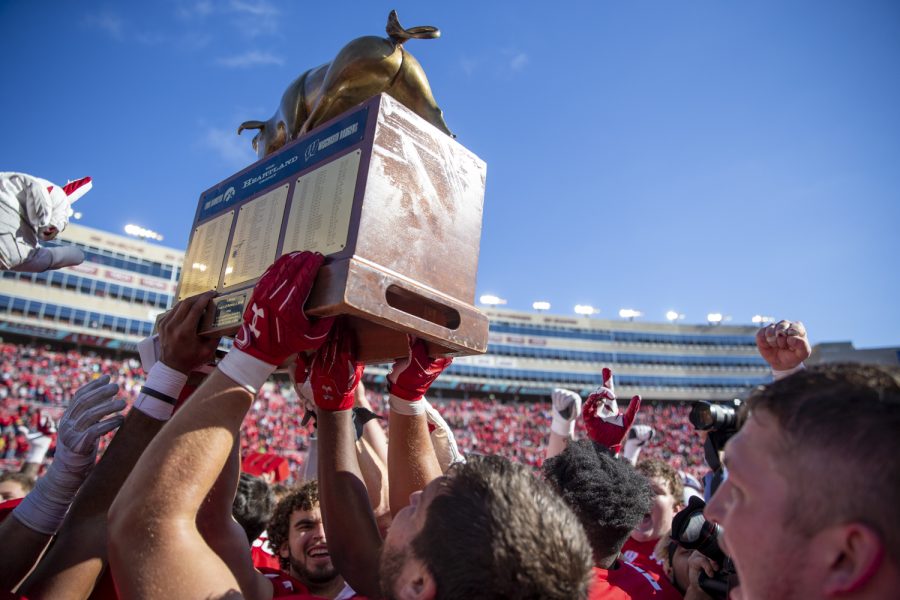 Wisconsin players hoist the Heartland Trophy during a football game between No. 9 Iowa and Wisconsin at Camp Randall Stadium on Saturday, Oct. 30, 2021. Iowa has yet to win at Wisconsin since 2015. The Badgers defeated the Hawkeyes 27-7.

Iowa only gained 156 yards of total offense, gave up six sacks and 10 tackles for loss, turned the ball over three times (granted, one of those was on special teams), and didn’t score a point in the first half. So, yeah, Hawkeye fans aren’t thrilled with offensive coordinator Brian Ferentz right now. The fullback dive on fourth down late in the third quarter, when Iowa still had a chance to get back in the game, was uninspired.

Iowa’s streak of allowing fewer than 24 points came to an end. That was mostly the offense’s fault, though. Wisconsin started three drives inside Iowa’s 20-yard line after three Hawkeye fumbles. Even when drives didn’t start off of an Iowa mistake, Wisconsin sustained a couple of long drives that ate up time of possession.

Iowa’s special teams was actually pretty good on Saturday, except for one glaring play.

With Charlie Jones out for a couple plays being checked on for an injury, wide receiver Max Cooper fielded a punt of the Hawkeyes. Well, he tried to. Cooper muffed the punt, and Wisconsin took over inside Iowa territory. Other than that, Tory Taylor averaged 49 yards per punt, and Jones averaged 10 yards per punt return and 30 yards per kickoff return.