Those who were on campus on Nov. 1, 1991 — and even some who weren’t — have a story to tell about the University of Iowa shooting. 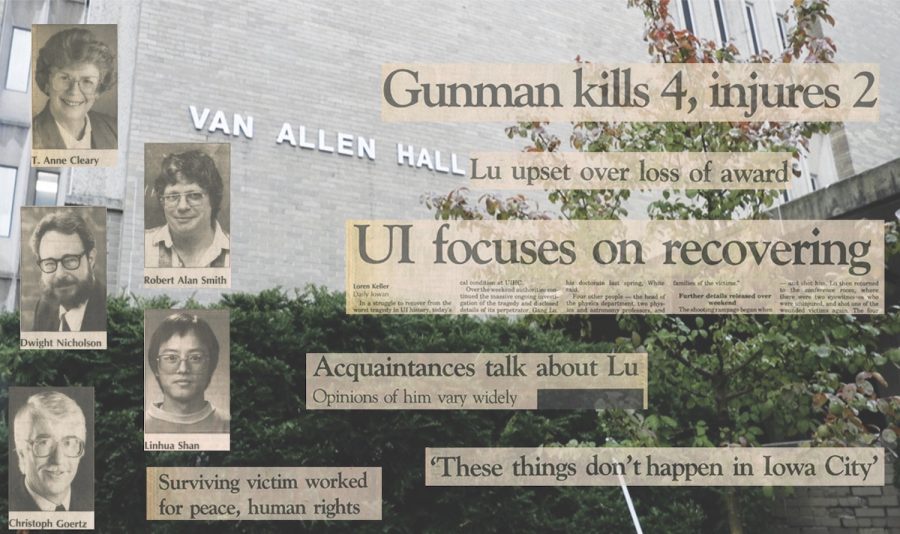 Van Allen Hall at the University of Iowa is seen on Friday, Oct. 29, 2021. Overlayed on the image are photos of newspaper clippings and the five victims of the 1991 UI campus shooting.

On Nov. 1, 1991, the University of Iowa community faced one of its biggest tragedies. Thirty years later, those closest to the event still feel its effects.

It was a quiet, snowy day when enraged former UI graduate student Gang Lu shot and killed five people in two different campus buildings. Among those who lost their lives were Christoph Goertz and Robert “Bob” Smith, both professors of physics and astronomy; Dwight R. Nicholson, chairman of the physics and astronomy department; Linhua Shan, a postdoctoral researcher; and T. Anne Cleary, associate vice president for academic affairs.

Writer Jo Ann Beard was not on campus the day of the shooting, but knew several people who were. Beard was the managing editor of the Journal of Geophysical Research and worked closely with Goertz and Smith. She considered Goertz a close friend, Beard said.

A graduate of the UI’s Nonfiction Writing Program, Beard wrote an acclaimed personal essay about the shooting. Her essay, titled “The Fourth State of Matter,” was originally published in The New Yorker in 1996. Beard currently works as a professor of creative writing at Sarah Lawrence College in Bronxville, New York.

“I knew Chris [Goertz] really well, and I knew the people in his research group,” Beard said in an interview with The Daily Iowan. “I knew his research team and his students, and I knew the student who wound up being the perpetrator of the crime. I would have called him a friend.”

Beard said, although her experience surrounding the shooting was an extremely impactful life event, she prefers not to reflect solely through the filter of her own work, but rather acknowledge the severity of the tragedy through her connection with the victims.

“It was an enormous tragedy. It profoundly affected not just the school, but the town itself and the countryside,” Beard said. “When you lose that many people in one afternoon, in a small community, nearly everybody has some connection to the story, if not to one of the victims.”

Mary Allen, a writing coach and graduate of the UI MFA Writers’ Workshop, who still lives in Iowa City, was working on the second floor of Van Allen Hall at the time of the shooting. She also wrote about her experiences in an essay titled “Cowboy Justice,” which was published in the 2019 anthology If I Don’t Make It, I Love You: Survivors in the Aftermath of School Shootings.

Allen worked alongside Beard at the same journal, she said, and the two remain close friends to this day. She said it shocks her that the shooting happened so long ago, and that her experience in the moment was a surreal one.

“I didn’t believe it at first — you can’t just go from ordinary, everyday life to ‘There’s a murderer’ in a second,” Allen said. “When I think about it, I feel like I was less scared than people who just heard about it because I knew exactly what was going on.”

Todd Kleusner was one student on campus the day of the shooting. A 19-year-old undergraduate student at the time, he heard about what happened from other students in his dorm hall — and the impact of hearing the news was still immense.

“It was big, and I really didn’t know how to feel at that time. It was something new,” Kleusner said. “These mass shootings — there weren’t as many back then as there seems to be today.”

Ultimately, Beard said the event was a sorrowful and appalling one, although she doesn’t expect the same feelings to last for those who are not as connected to the shooting.

She said the shooting had a lasting impact on her opinion of gun control, which became much firmer after experiencing the shooting.

“It became something other than an abstract concept to me,” Beard said. “It became real, and it had faces attached to it, and personalities. All those people had families. They all did. It’s just as tragic now, 30 years later.”