Believe it or not, Hawkeye fans aren't thrilled with Iowa's performance against Wisconsin. 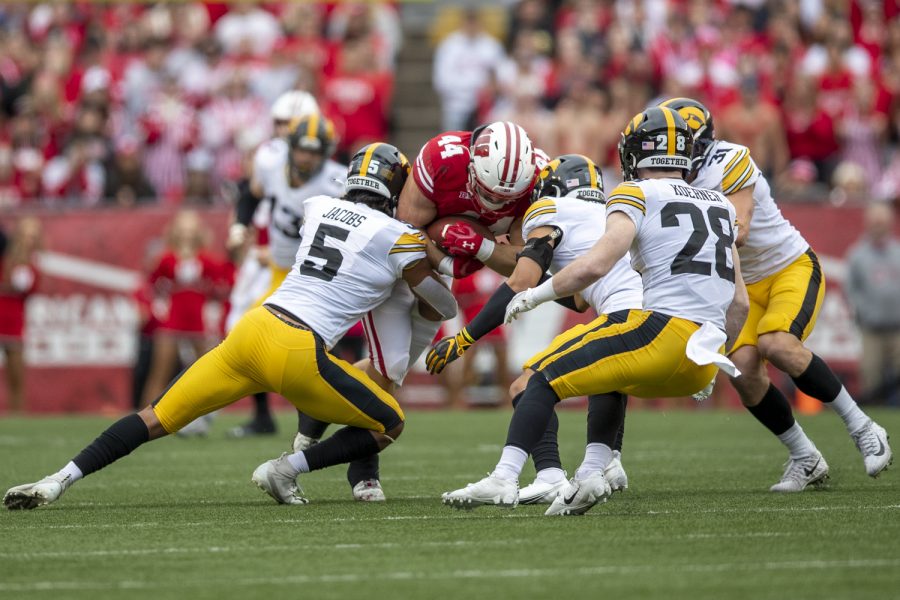 Wisconsin fullback John Chenal fights for yards during a football game between No. 9 Iowa and Wisconsin at Camp Randall Stadium on Saturday, Oct. 30, 2021. The Badgers defeated the Hawkeyes 27-7. (Jerod Ringwald/The Daily Iowan)

MADISON, Wis. — The No. 9 Iowa football team lost, 27-7, to Wisconsin at Camp Randall Stadium on Saturday.

The Hawkeyes only compiled 156 yards of total offense. Iowa is now 6-2 on the season and 3-2 in the Big Ten. The Hawkeye fan base is far from thrilled with Iowa’s performance against Wisconsin.

There were a lot of things wrong today, but that 4th-down call.. If you’re going to look past the poor start, which I can considering Iowa had momentum in that moment, you call a second straight FB dive? Really? No QB sneak? No fake FB dive and toss? Game-changing call. #Hawkeyes

The Badgers take down No. 9 Iowa in dominant fashion. pic.twitter.com/0Sct7IzGCh

Iowa offense going 3 and out pic.twitter.com/T65s0Guic8

It’s not just that Brian Ferentz is objectively bad at his job (he is). Or that Spencer Petras hasn’t progressed at all in a year. It’s that the offensive line is so, SO BAD. And for a Ferentz team, that is both extremely weird and extremely bad news.

LEAKED: We got an exclusive look at Iowa’s passing playbook. pic.twitter.com/HzaQYWFt0c

Oh my god he threw the ball out of bounds on 4th down. Help us. Help.

This guy should be filing for unemployment by Monday. pic.twitter.com/PEAcbN7smT

Iowa would be better off bringing in a college kid with an Xbox and Madden 22 and defaulting to ask Madden for every play on offense. Brian Ferentz needs to go. #IowavsWisc #ESPN #Madden22 #collegegameday pic.twitter.com/nfCxCDdiiV

The Iowa defense has been amazing covering the stink, stank, stunk that is Brian Ferentz.

Me to Brian Ferentz pic.twitter.com/ADE1OcoW6j

For the first time I can ever recall, the Nebraska football crowd is cheering Wisconsin…for beating Iowa.