The Hawkeyes hosted the event at the Hawkeye Tennis and Recreation Complex in Iowa City this week. 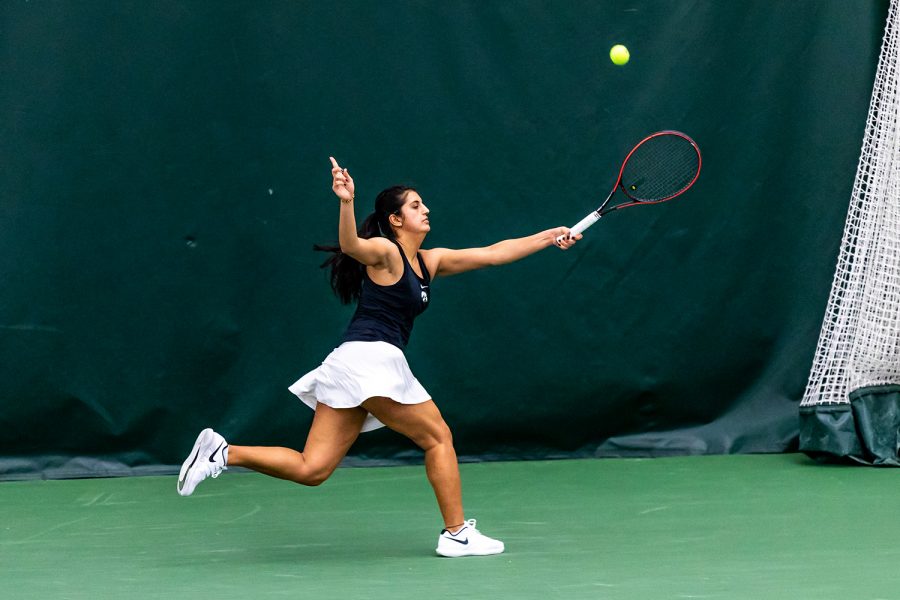 Iowa’s Vipasha Mehra signals a point during the Iowa Women’s Tennis match against Purdue on Feb. 28, 2021 at the Hawkeye Tennis and Recreation Complex. Iowa defeated Purdue 6-1.

Though a few Hawkeyes were eliminated in the early portion of the tournament, some still had some impressive runs in the event’s main draws.

Gillas found herself in many competitive matches throughout the week. She began her journey in the main draw with victories over Saint Louis’ Kate Sexton and South Illinois’ Fabiola Perez.

Shortly after she officially joined the main draw field, Gillas was defeated by Southern Illinois’ Jordan Schifano in the bracket’s round of 128.

Like her doubles partner, Mannix had a fairly decent run in the ITA Central Regional Championships’ main draw. The 6-foot Nebraskan received a bye in the round of 128. She then defeated Saint Louis’ Norhan Hesham in the round of 64.

Mannix’s run in the tournament’s main draw ended in the round of 32. She was beaten by Kansas’ Malkia Ngounoue.

Despite her exit from the event, Mannix stressed that it was still an important experience for her.

“I think it’s pretty important to be able to compete in fall tournaments,” Mannix said. “We didn’t have them last year with COVID. Honestly, I think it did make a difference, especially with the freshmen. I think it’s really good to be able to kind of have a checkpoint of where we’re at and see how we are competing as a whole team.”

With the 2021 ITA Central Regional Championships now behind them, only one full-team event remains on the Hawkeyes’ fall schedule: The UNLV Invitational. The event will mark Iowa’s last chance to play as a team before regular season duals begin in January.

One of the Hawkeyes’ most surprising performances this week came from Pokorna. The true freshman from the Czech Republic advanced to the round of 32 in the ITA Central Regional Championships’ singles main draw, defeating Drake’s Darinka Stepan and Minnesota’s Ekin Ercetin in the process.

Kansas State’s Karine-Marion Job ended Porkorna’s tournament run in the round of 32, 6-2, 7-5.

“This is definitely a great experience for me just to get matches in before the season starts, and to improve a lot of stuff along the way,” Pokorna said. “I feel really positive about the progress in the matches that I’ve made, and I’m really excited to play more and keep improving along the way.”

After ITA Central Regional Championship action concluded, Hawkeye head coach Sasha Schmid expressed how honored she and her team were to host the event.

“It’s been great,” Schmid said. “I’m just really grateful for all the work our staff at the University of Iowa Athletic Department puts in. It takes so many people to run an event like this. It’s been great to have everybody in Iowa City, and to see our facility and to be on our home courts. We don’t get to host this often. So, we really kind of took advantage and enjoyed it.”

The next event on the Hawkeyes’ schedule is the Dayton Beach 25K — a United States Tennis Association event. Schmid has yet to announce which of her athletes are going to compete in the tournament.