The No. 5-seeded Hawkeyes will play at No. 4 seed Michigan State on Sunday in the first round of the postseason. 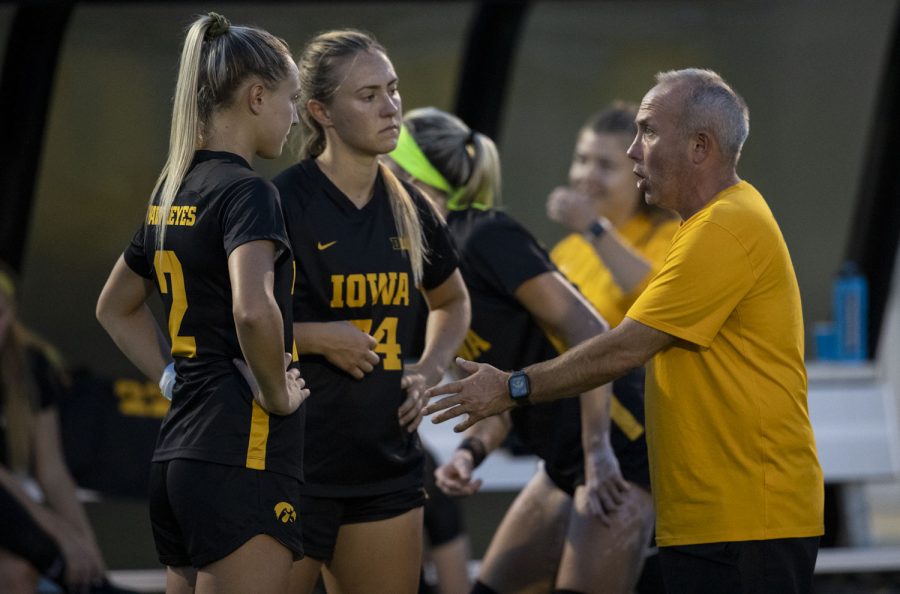 Iowa midfielder Hailey Ryderberg and defender Sara Wheaton meet with head coach, Dave Diianni before the game during a soccer game between Iowa and Maryland at the UI Soccer Complex on Sept. 30, 2021. The Hawkeyes defeated the Terrapins 2-1.

The anticipation of vengeance is in the air for Iowa soccer as the Hawkeyes visit Michigan State on Sunday at noon for their Big Ten Tournament quarterfinal match.

The Hawkeyes surrendered a first-half lead to the Spartans in their regular season matchup, as Michigan State took home the 2-1 victory on Oct. 3.

As both the Hawkeyes and the Spartans finished with 16 points in the conference standings, Michigan State’s head-to-head victory over Iowa gave the Spartans the No. 4 seed and home field advantage to host the fifth-seeded Hawkeyes.

Wheaton said the Hawkeyes learned from their regular season matchup — the Spartans are a gritty team that will require Iowa to play the full 90 minutes.

Iowa head coach Dave DiIanni said the Hawkeyes match up well against the Spartans. He’s excited to have forward Meike Ingles, midfielder Addie Bundy, and goalkeeper Macy Enneking compete against the Spartans this time around — all three did not play in the first meeting.

DiIanni also said he wants to see the Hawkeyes handle the ball better when they have control of it. In their last match — a 1-1 draw at Wisconsin on Oct. 24 — Iowa was outshot, 18-2.

“We just ended up defending too often,” DiIanni said. “It’s important to be able to be good defensively, and I think in the last couple games we’ve corrected some issues, but we also have to be able to make the other team play when we have the ball and chase the game a little bit.”

The Hawkeye offense could have a tough matchup with Spartan junior goalkeeper Lauren Kozal, who leads the Big Ten with a .862 save percentage.

At practice Wednesday, Iowa focused on the urgency to score goals as the offense tried to break defending lines as quick as possible.

“We did work on a lot of just going forward as soon as possible,” senior midfielder Hailey Rydberg said. “So, I think that’s something we want to replicate in the game Sunday is just going vertical, going forward as quickly as we can and getting those opportunities on goal.”

Rydberg added that the Hawkeyes have grown in team chemistry since the Oct. 3 meeting. The players have started to sync up, understanding each other’s movements better.

Iowa will be guaranteed a spot in the NCAA Tournament if it wins the conference championship. Otherwise, the Hawkeyes will be looking for one of 32 at-large bids.

The semifinals for the Big Ten tournament are on Nov. 4, while the championship game is on Nov. 7. The 64-team field for the national tournament will be announced on Nov. 8.