The maps, the second set proposed by the nonpartisan Legislative Services Agency, passed the Republican-led Senate and House with little opposition. 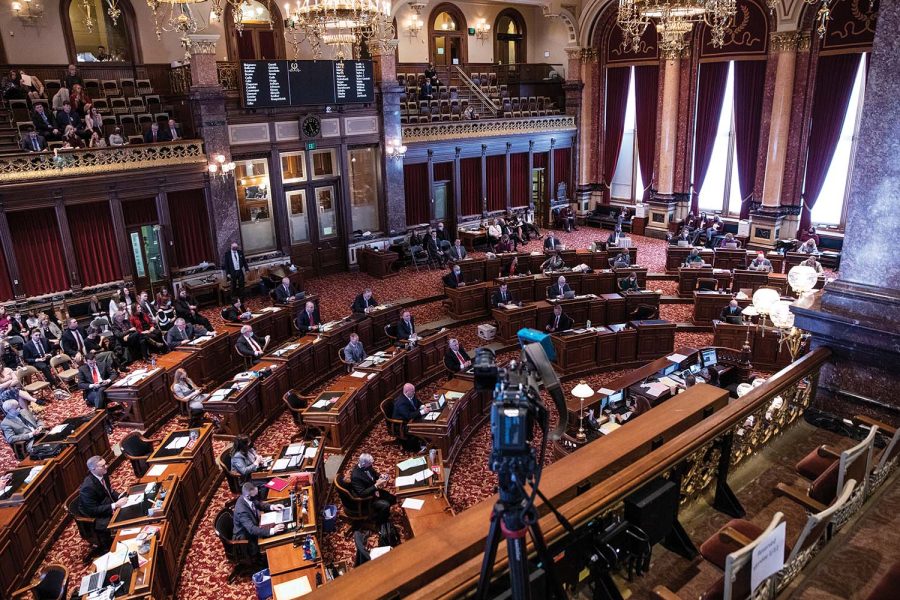 Members of the Iowa senate take part in the opening of the 2021 legislative session on Monday, Jan. 11, 2021 at the Iowa State Capitol in Des Moines. Legislative goals for the session include further tax cuts, expanding in-person learning, and moving towards economic recovery from the COVID-19 pandemic.

The Iowa Senate and House passed the second proposed set of redistricting maps from the Iowa Legislative Services Agency in special session on Thursday.

The latest set of maps received bipartisan and nearly unanimous support in the the legislature, with a Senate vote of 48-1 and a House vote of 93-2.

“The new congressional boundaries have placed Congresswoman Axne and me in the same district,” Miller-Meeks wrote in a prepared statement. “I have indicated that I will be a candidate for re-election. I will be evaluating the new districts to determine my next step, which I will be announcing shortly.”

The first round of maps from the Legislative Services Agency, a nonpartisan group responsible for drawing Iowa’s maps, was rejected by Senate Republicans.

“For [Democrats], it’s less about an individual map and it’s more about the process,” said Senate Minority Leader Zach Wahls, D- Coralville, in an interview with The Daily Iowan on Wednesday night. “From the beginning, we’ve been saying Iowans want fair maps that have been drawn by the nonpartisan experts, without political amendments. And that’s what we saw in the first map, and that’s what we’re seeing on the second map.”

Senate Majority Leader Jack Whitver, R-Ankeny, said in a prepared statement that the second plan corrects issues of compactness and population differences that Republicans raised in the first plan.

“Despite years of fear-mongering about Gerrymandering and claims the first map could not be improved, the Iowa Senate followed the process outlined in Iowa Code and a more compact map with better population differences has been approved,” Whitver said. “Senate Republicans look forward to continuing to serve the people of Iowa by delivering lower taxes and more pro-growth policies for the next decade.”

After a Senate vote in the early afternoon, the House passed the maps around 6 p.m. on Thursday.

House Minority Leader Rep. Jennifer Konfrst, D-Windsor Heights, said in debate that if the legislators supported these maps they will be giving Iowans power through nonpartisan districts.

“Iowa House Republicans followed the process and delivered a fair map for the people of Iowa just as we said we would,” Grassley said in a prepared statement.

Rep. Bobby Kaufmann, R-Wilton, said Democrats and the media pushed that going to a third map would result in gerrymandering.

“I’m just thrilled today stand before all of you and show just how wrong they all were,” Kaufmann said. “These are good maps.”

Gov. Kim Reynolds said the Legislature’s approval of the maps is encouraging.

“I am confident in how the process played out—just as the law intended, and I believe these new districts will fairly and accurately represent the citizens of Iowa for the next decade,” Reynolds said in a prepared statement.

Rep. Mary Mascher, D-Iowa City, told the DI in an interview ahead of the special session that lawmakers needed to finalize the maps swiftly for candidates to make decisions.

“There’s a lot of pressure on everybody in terms of House, Senate, Democrat, Republicans to get this done as soon as we can in light of the fact that every time we delay, it makes it more difficult to recruit,” she said.