Some Iowa farmers say biofuels and electric vehicles shouldn’t be pitted against each other, and instead should work together to reduce emissions. 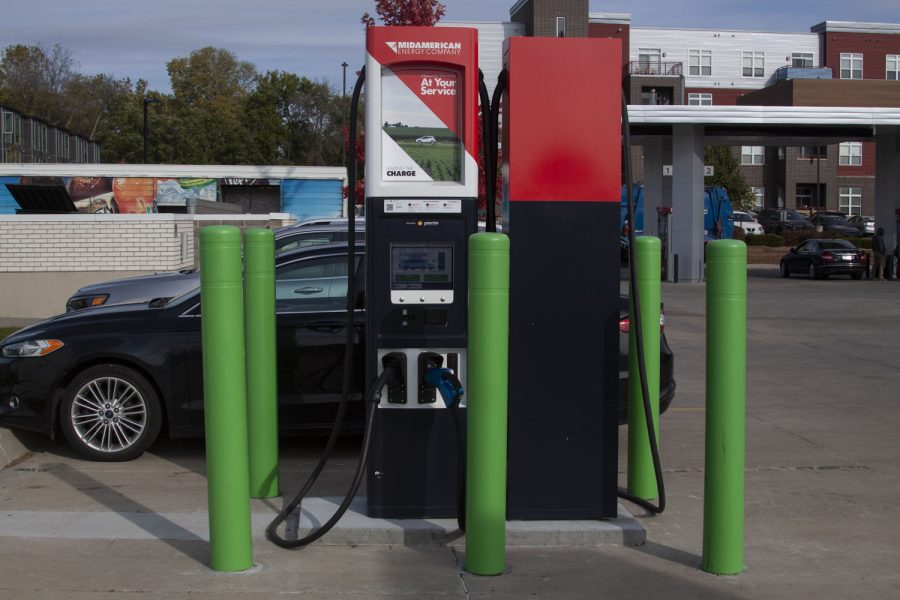 An electric car charging station, located at Kum & Go on Riverside Drive in Iowa City, is seen on Wednesday Oct. 27, 2021.

The decisions by car manufacturers to only produce light-duty electric vehicles in the future may cause farmers to change how their biofuel crops will be used. Iowa farmers say those potential changes aren’t something to worry about.

General Motors said in a press release in June that they will only produce electric vehicles by 2035. General Motors produces Buicks, Cadillacs, GMCs, and Chevrolet vehicles, making the company one of the largest car manufacturers in America.

Iowa farmers have produced biofuels, specifically ethanol, for several decades to help fuel these vehicles and decrease the amount of fossil fuels consumed. According to the Iowa Corn Growers Association, 45 percent of the corn grown in Iowa is used to create biofuels.

Steve Swenka, a farmer and rancher of Double G Angus Farms in Tiffin, Iowa, said car manufacturers changing to electric vehicle production could be an economic concern for farmers, but it wouldn’t last long.

“If nearly half of that [ethanol] crop is grown in Iowa the farmers are gonna have to find another way to market the crop,” Swenka said.

Aaron Lehman, president of the Iowa Farmers Union, said electric vehicles and biofuels shouldn’t be pitted against one another. These clean energies should work together to end fossil fuel use and help curb climate change, he said.

“I think that most of the general public perception or framing of these issues has put biofuels versus electric cars,” Lehman said. “While yes there are going to be issues moving ahead, I think in general the use of biofuels and electric vehicles are very compatible.”

Iowa Interfaith Power and Light Executive Director and Farmer Matt Russell said that the perceived battle between biofuels and electric vehicles has been created by the fossil fuel industry. The industry has discredited biofuels and electric cars because the two are a direct threat to their business model, he said.

“If they can get farmers on board to help them battle against those clean solutions that’s what they’re gonna do and have been doing,” Russell said.

Lehman said that while the path most car manufacturers are taking is towards electric vehicles, the transition won’t happen overnight. The potential for negative impacts on the farming industry won’t be felt for a long while, if at all, he said.

There are other ways that the biofuels Iowa farmers produce can be used, Swenka said. One example is how the Archer-Daniels-Midland corn processing company in Cedar Rapids is exploring ways to use biofuels in the airline industry, he said.

“Usually when one door closes, another door opens,” Swenka said. “Farmers, for the most part, are pretty optimistic, and if they weren’t, they’d probably be in a different line of work.”

Russell said one reason why electric vehicles aren’t a problem for farmers and biofuels is because farmers can provide the energy and fuel needed for these vehicles. In fact, they can work together to improve clean energy methods, he said.

Swenka said Iowa farmers shouldn’t be worried about electric vehicle expansion and the change they will bring.

“As farmers, and I think history has proven this, we’re a very resilient bunch,” he said.