The University of Iowa Hawkeye Marching Band's Golden Girls, Kylene Spanbauer and Ella McDaniel, talk about their unique experience twirling together in the same position. 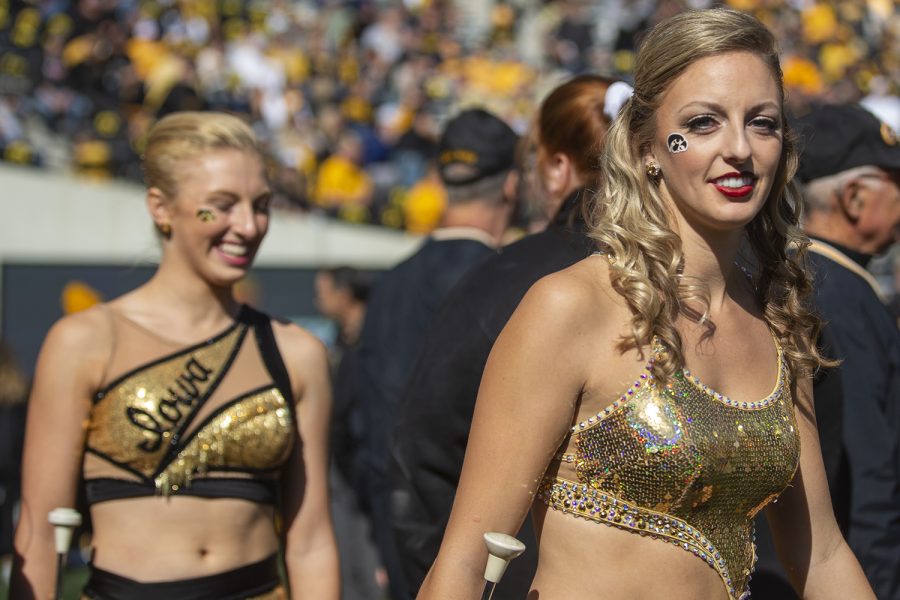 Iowa Golden Girls Kylene Spanbauer and Ella McDaniel walk onto the field before a football game between No. 2 Iowa and Purdue at Kinnick Stadium on Saturday, Oct. 16, 2021. The Boilermakers defeated the Hawkeyes 24-7.

The position of the Golden Girl in the University of Iowa’s Hawkeye Marching Band has traditionally been held by just one twirler but now — for the first time since 1987 — it is held by two.

Senior Golden Girl Kylene Spanbauer is originally from Fond du Lac, Wisconsin, where she spent her childhood baton twirling and participating in competitions. After coming to a Hawkeye football game her freshman year of high school, she knew she wanted to be the UI’s Golden Girl.

“I have loved being in the Hawkeye Marching Band here,” Spanbauer said. “It’s been just an incredible experience.”

One of her favorite marching band traditions is during the third quarter of football games at Kinnick Stadium, where the drum major and the Golden Girl go up to the top floor of the UI Stead Family Children’s Hospital and visit with the kids there. Unfortunately, because of COVID-19, the tradition was unable to this year, but Spanbauer said she knows it was for the best.

After four years of being the only twirler in the band, Spanbauer is now joined by Junior Golden Girl Ella McDaniel, a first year.

Spanbauer said it was different adding another person to the position, but she was excited to figure out how it was going to work. The pair wanted to highlight their individual skills, but also build off each other to become better twirlers, she said.

Spanbauer described she and McDaniel’s relationship as “so much fun.” She said they are always messing around together, and McDaniel almost feels like her little sister because of the five-year age difference between them.

“I’m almost her mom at times. She likes to call me ‘Mom’ on occasion,” Spanbauer said. “I guess because I’m always reminding her to do things or trying to assist her in learning the Golden Girl position.”

McDaniel is from Candia, New Hampshire, and has twirled for 13 years. She said her favorite part of twirling is the challenge, and that there is always something new to learn.

One of the biggest moments in football this season was Iowa’s game against Penn State. McDaniel had only one word to describe the feeling of that day – “insane.” She didn’t know what to expect, after she was told fans might storm the field following the game.

“Just the thought of knowing how many more people were going to be at this game was a little daunting, but in my head, I thought, ‘It’s just another game,’” she said.

McDaniel said she has looked up to the Hawkeye Marching Band since she was little, so she has yet to feel homesick. She also said she can go to Spanbauer for anything, including to learn everything she will need to know when she is the only one in the position.

Next year, Spanbauer plans on moving back home to Wisconsin to be with family, which is something she hasn’t been able to do for five years. She also plans on working in recreational therapy, but doesn’t know yet which route she’d like to take.

“I’m so thankful for my experience in the Hawkeye Marching Band and all the people I’ve gotten to meet,” Spanbauer said. “I’m just so excited to see what Ella does with the position. Her and I have had an incredible year together so far.”