The Hawkeyes have a perfect 16-0 record through the 2021 fall season and clinched the No. 1 seed in the Big Ten Tournament. 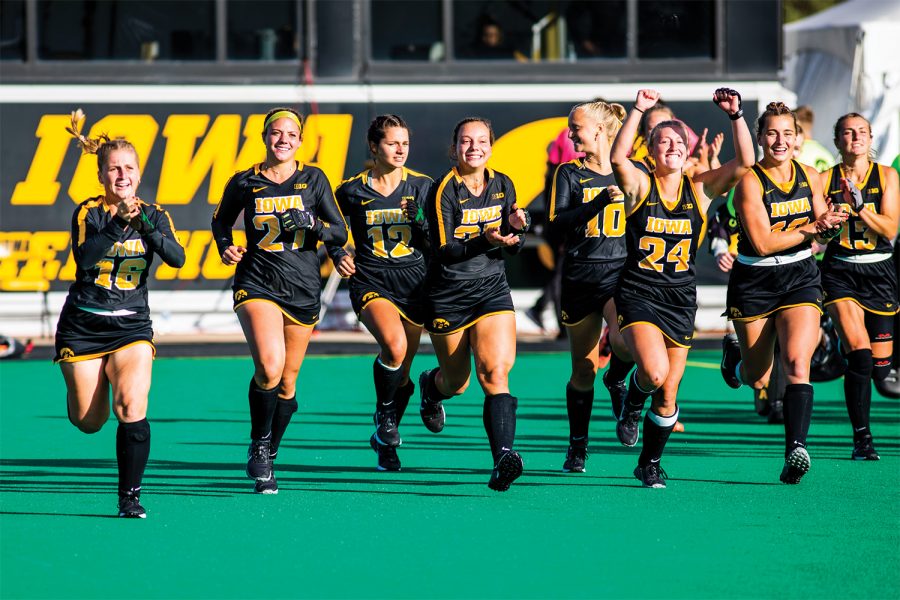 Iowa players celebrate the win after the field hockey game between No.1 Iowa and No. 2 Michigan on Friday, Oct. 15, 2021, at Grant Field. The Hawkeyes defeated the Wolverines 2-1 in double overtime and a shootout.(Jeff Sigmund/Daily Iowan)

Expectations were high for Iowa field hockey ahead of the 2021-22 season. The Hawkeyes started the year ranked third in the National Field Hockey Coaches Association’s preseason poll.

Since then, Iowa has risen to No. 1 in the NFHCA poll, downing six teams currently ranked in the top 10 in the process — including North Carolina and Michigan.

“It’s all about our mentality,” senior Anthe Nijziel said. “Playing for 60 minutes mentally and physically tough. The grit of the team is also a part of our culture.”

The Hawkeyes already clinched the Big Ten Conference’s regular season title outright. Iowa defeated Ohio State, 3-0, on Oct. 17 to move to 16-0 on the season. The Hawkeyes are 7-0 in league play.

While the Hawkeyes do own the Big Ten regular season title, they still have one game left before the Big Ten Tournament.

An Oct. 29 matchup with No. 5 Northwestern at Grant Field in Iowa City is all that stands between the Hawkeyes and an undefeated regular season.

“You don’t really need to do anything to get these guys up to play Northwestern since there’s a lot on the line, and we always have great battles,” Iowa head coach Lisa Cellucci said.

Iowa’s current 16-0 record is already impressive without a regular season-ending win over Northwestern. The Hawkeyes have beaten nine ranked teams so far this season — eight of which were rated inside the top 11.

Star players like senior forward Ellie Holley and goalkeeper Grace McGuire have certainly helped the Hawkeyes get to 16-0. McGuire has racked up 36 saves this year, and Holley has put the ball in the back of the net a whopping eight times in 2021-22.

Nevertheless, the Hawkeyes are still focused on playing a team-centered brand of hockey. Iowa believes no individual player is more important than another.

Iowa is currently in pursuit of its first national championship since 1986.

Iowa would host one or two NCAA Tournament games at Grant Field if it were to earn a No. 1 overall seed.

NCAA Tournament semifinals and finals will be held in Ann Arbor, Michigan, Nov. 19-21. The Hawkeyes were eliminated from the 2020-21 NCAA Tournament via a 3-0 semifinal loss to North Carolina.