About 80 people from the county’s Sudanese community gathered on the Pentacrest to protest Sudan’s state of emergency following the military’s takeover. 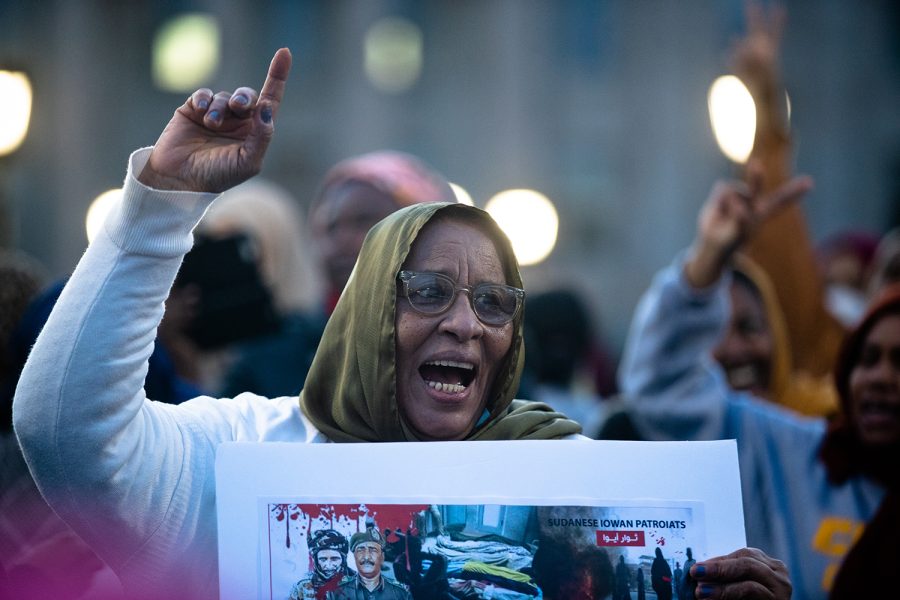 A protester chants and throws up their hand during a protest against a military coup in Sudan at the University of Iowa Pentacrest on Monday, Oct. 25, 2021. Around 80 people protested with other protests happening around the nation. (Gabby Drees/The Daily Iowan)

Members of the Johnson County Sudanese community joined thousands of protesters around the world on the Pentacrest on Monday to protest Sudan’s military coup.

The Sudanese military took power on Monday, ending a three-year transition period after former President Omar al-Bashir was removed from office in 2019. The military coup sent Sudan into a state of emergency as country officials were arrested by military forces.

About 80 people in the county gathered to call for Iowa Senate action and a civilian-run government in Sudan. The BBC reported on Monday that seven people are reported dead and 140 people are hurt from the protests.

Israa Elbashir, 23, a student at Mount Mercy University, said she joined the protest after hearing about it through a group chat.

She said she is protesting to express that her community won’t accept anything else than a civilian government led by the people, for the people.

“We are just starting,” she said. “We’re all condemning this on them. Right now, as we speak, there is fire ammunition happening in cities and neighborhoods and people are getting killed.”

Elbashir said some of her family members, including her brother, are protesting in Sudan.

“The entire Sudanese community and everybody across the country are in the streets,” she said.

Elbashir translated a chant from the protest for The Daily Iowan, which said, “We are out, and we are not going back until we have a civilian government led by the people.”

Some protesters held their phones up with a Facebook Live stream open to the crowd.

Amar Samel, 56, an Iowa City resident from Sudan who was given a phone to stream the protest, said there is no access to the internet or Facebook right now for people in Sudan.

“I have no communication with my family,” he said. “This morning I was lucky to talk to my brother. He told me he walked for 20 miles on foot protesting. He said he does not know what is going on.”

He said he is worried for the protesters in Sudan, who are mostly young activists.

“We need support and we need help,” he said. “We are raising our voices for our brothers and sisters.”

Fatima E. Saeed, an Iowa City artist and former employee of the Iowa Center for Worker Justice of Eastern Iowa, said she had not talked to her family in Sudan for two days because of the media blackout.

“My mom and my siblings are in Sudan,” she said. “I did not get sleep last night. I tried to call them, but most of the time I can not hear them very well.”

Saeed said the Sudanese community would like to talk to the Iowa Senate and Gov. Kim Reynolds because they would like to help stop the killings of people.

“They are killing innocent civilians with heavy machines right now,” she said. “We need urgent help. People have the right to live. They have to respect people’s rights and put their guns down.”

Fatima Hassan, 13, a student at Northwest Junior High School in Iowa City, said she joined the protest with her parents, who are from Sudan.

“I want to support the Sudanese community in Iowa,” she said. “My parents are worried about my sister-in-law’s family, because they have been out protesting a lot.”

Nadeem Mohammed, 18, a University of Iowa first-year who moved from Sudan eight years ago, said other students who were walking by asked about the coup in Sudan.

“We appreciate it, because we are actually informing people,” she said. “It makes me feel like they care and they are curious about it.”

Mohammed’s friend, Shahad Elnour, 19, another UI student from Iowa City, said she assumes the worst until her family can contact her about what is going on.

Elnour said the group will organize at noon every Saturday going forward.

“They are killing people, but we don’t know who is being killed,” she said. “We are just trying to spread awareness because there’s not much that people know about this situation, and the community needs help.”