The Hawkeyes ended the regular season at fifth place in the Big Ten standings to qualify for the conference tournament. 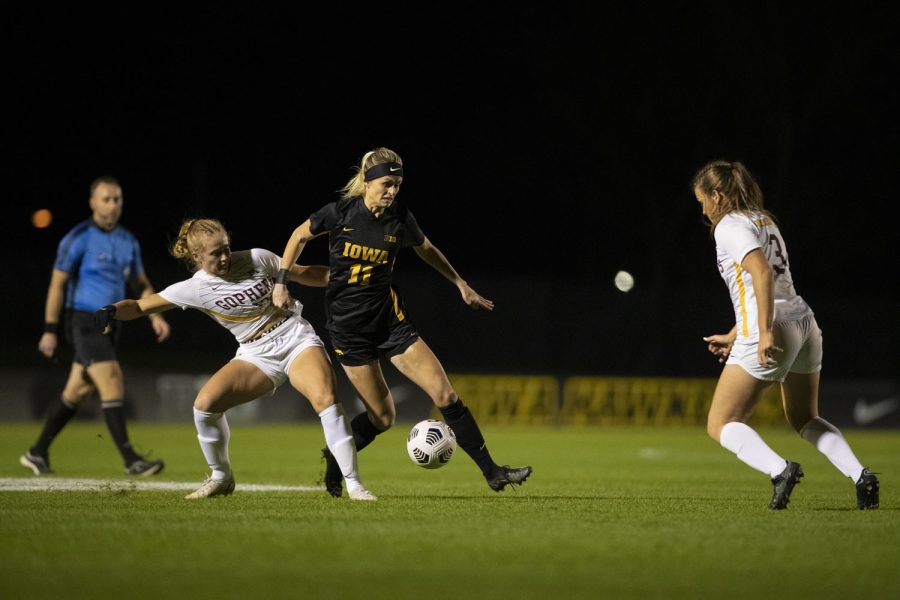 The Iowa soccer team battled to a 1-1 draw at Wisconsin on Sunday.

The Hawkeyes got on the board first with a goal from graduate forward Alyssa Walker in the sixth minute. Defender Sam Cary sent the ball from deep in Iowa territory soaring to the opposite end of the field, where Walker was ahead of a pack of Badgers.

The Hawkeyes took the lead through most of the half, but Badger midfielder Emma Jaskaniec scored a goal 16 seconds before the end of halftime.

The Hawkeyes and Badgers stayed in a tie at one through the second half and 20 minutes of overtime.

Wisconsin outshot Iowa, 11-1, from the second half to the end of the game, but ultimately neither team got the ball past the net.

“I’m proud with the team’s performance today playing a difficult opponent, and with the pressure of knowing we probably needed a positive result to qualify for the tournament,” Iowa head coach Dave DiIanni said in a release. “We didn’t generate as much offensively as I would have liked, but our commitment to defend as a team was excellent all game. Finishing tied for fourth is a respectable placing and we have an opportunity to extend our journey one more game, searching for the best version of this team.”

The Hawkeyes finished the regular season with a record of 11-5-2 overall and 5-4-1 in the Big Ten — fifth place in the conference standings.

The Hawkeyes qualified for the third consecutive year as the No. 5 seed and will play at Michigan State next Sunday in the quarterfinals.

In her first and only season as a Hawkeye, Walker scored eight goals for Iowa  in fall 2021 — leading the Hawkeyes.

Walker scored the first goal of her Hawkeye career in the season-opener at DePaul on Aug. 19.

The Richmond soccer transfer had a two-score game against Purdue-Fort Wayne on Sept. 2, with both goals coming in the first 11 minutes. Four of her goals came against Big Ten opponents.

The Hawkeyes will face the Spartans in the Big Ten Tournament next Sunday at noon.