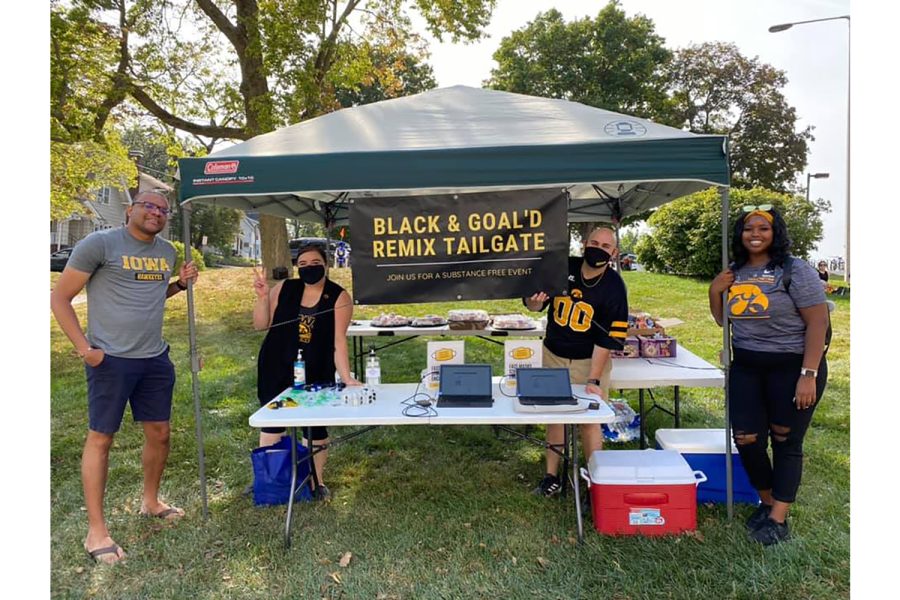 The substance-free Black and Goal’d Remix Tailgate is back after a year without tailgating.

In 2021, there is a tailgate every home game except for the Homecoming game against Purdue. Along with the additional dates, the tailgate has also seen other changes and improvements.

Emma Welch, co-chair of the Black and Goal’d Remix Tailgate Committee, said the event was brought back because of the success of the original 2019 tailgates.

The tailgate takes place in the grassy area near Slater Hall.

To track the attendance of the tailgate and promote the event even further, Welch said the committee started using swipe machines for participants to sign in at the tailgate.

“On the low end, we’ve had maybe 150 students,” Welch said. “On the higher end, with varying levels of participation, probably 240.”

Karen Grajczyk-Haddad, committee co-chair with Welch, said there are many goals the tailgate hopes to achieve on game day and a lot of them revolve around student connections.

“One [goal] is to provide a space for students to engage in activities, school spirit, and some fun prior to the Hawkeye football game, but also acknowledging that there’s a lot of students on campus that do not care about athletics, and that is totally fine,” Grajczyk-Haddad said.

The Black and Goal’d Tailgate is different from other tailgates that occur around campus on game day, she said, because it is a substance-free event.

“Alcohol and other drugs are not on the premises and that they’re not being consumed,” Grajczyk-Haddad said.

Grajczyk-Haddad said she and Welch were surprised that the University of Iowa did not have substance-free tailgates before 2019.

“We were both surprised that Iowa didn’t have that type of opportunity already,” Grajczyk-Haddad said. “Most schools have a substance-free tailgate.”

“There’s been research done to have the criteria of what makes a particular campus high risk for alcohol-related negative consequences,” Grajczyk-Haddad said. “We meet all of them.”

The criteria that schools meet to make it “high-risk” consist of things like having a Greek life system, having Division I athletics, or being populated by small-town students, Grajczyk-Haddad said.

Mortis Jennings, a volunteer from the tailgate and a UI student, said a lot of the time he spends volunteering is getting familiar with the students that come to the event.

“It’s just like a hangout time where you greet people,” Jennings said. “[You] make sure they scan in and everything and you pass out food and whatnot. But it’s just a time to talk to people and get to know people.”

As a volunteer, Jennings said he has been able to make connections with others.

“I’m new to the program,” Jennings said. “I haven’t met a lot of people that are associated with the MISSE [Multicultural and International Student Support and Engagement] spaces. So, it’s been a lot of, I guess you could say, making connections.”

Jennings said he enjoys knowing there is somewhere students can go and hang out without the pressure of alcohol, helping students stay healthy.

“It’s good to know that they’re at least putting something in their body that isn’t just alcohol,” he said.

“In 10 years, I would love for us to have like hundreds of students,” Grajczyk-Haddad said. “And the food is gone in an hour because so many people come. That is the goal.”