As workers at John Deere plants across Iowa strike for higher wages, labor leaders and experts said workers nationwide are reevaluating what they’re willing to work for. 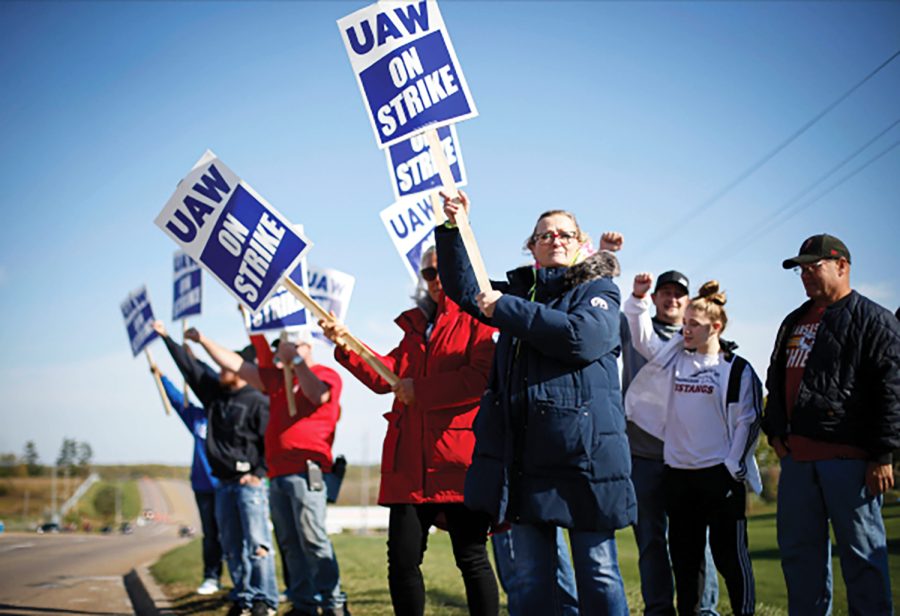 Members of the United Auto Workers strike outside of the John Deere Engine Works plant on Ridgeway Avenue in Waterloo, Iowa, on Friday, Oct. 15, 2021. About 10,000 UAW workers have gone on strike against John Deere since Thursday at plants in Iowa, Illinois and Kansas.

As the United Auto Worker strike at John Deere plants across Iowa and the U.S. reaches its sixth day, Iowa City labor leaders and experts said the strike is part of a larger movement of workers demanding more for their labor.

Paul Iversen, a labor educator at the University of Iowa’s Labor Center, said the strike reflects a trend of workers reevaluating their relationship with work and what they’re willing to work for.

The trend, he said, is currently sweeping the nation.

“That’s what’s happening at Deere — you have a large corporate employer, a global corporation that’s making record profits,” he said. “Much more than they’ve ever made in any previous year. So they’re not poor.”

More than 10,000 John Deere machinists and factory workers across three states have been on strike since Oct. 14 after workers overwhelmingly rejected a proposed contract agreement reached between UAW and the agriculture corporation.

In May, Deere reported its second-straight quarter of record profits, reaching $1.79 billion according to The Des Moines Register. The company is projecting a record $5.9 billion in profits for the fiscal year 2021.

The proposed contract would have given workers pay increases ranging from 5 to 6 percent depending on their pay level, as well as a 3 percent increase in 2023 and 2025 amid other benefits.

The strike at John Deere comes on the heels of several prominent strikes this year: Kellog workers in four states have been on strike since Oct. 5, and the union representing 60,000 film and television workers was on the verge of a strike before the union and film studios reached a deal last week.

Iversen said the pandemic contributed to workers looking to get more out of their jobs, as many factory workers continued to go to work in hazardous conditions throughout 2020.

“And they did that, and they produced, and the company’s making huge sums of money, and they’re just saying, ‘You’ve got to give me the dignity and the respect to give us a share,’” he said.

Jesse Case, the secretary-treasurer and principal officer of Teamsters Local 238 in Cedar Rapids, said he thinks workers — both unionized and non-unionized — are looking to get more out of their employers in the current labor market.

He said the approval rating of unions — which reached the highest point since 1965 according to a recent Gallup poll — have been rising because people see a disparity between company profits and worker wages, which has been increasing nationwide since 1979, according to the Economic Policy Institute.

“You’re almost seeing a general strike by non-union workers, unorganized general strike, which is leading to a worker shortage in every industry,” Case said. “Every employer is having a hard time finding people to hire, and unionized workers are tired of fighting for every last item with these global corporations that are making money hand over fist.”

As the workers at John Deere plants continue to strike, Iowa City union representatives said their unions were in full support of the striking workers.

Case said he and other Teamsters have been standing on the picket line with Deere workers over the past days in Waterloo and elsewhere. He said the Teamsters are asking their members not to cross the picket line, or do work for Deere while the strike is going on.

“When members of one union get attacked, it’s an attack on all workers,” he said. “That’s why we stand in solidarity with other unions that are being attacked by these global companies that are making record profits.”

Several other unions, including United Steelworkers Local 105 and Plumbers and Pipefitters Local 25, have given donations to the striking workers or joined the picket line in Davenport in the last few days, according to the Quad-City Times.

Steve Nienhaus, business representative of the North Central States Region Council of Carpenters in Iowa City, said while striking is a last resort for unions, the carpenter’s union supports the measures the John Deere workers are taking to improve work conditions.