The Boilermakers took the lead with 19 seconds remaining in the first half. 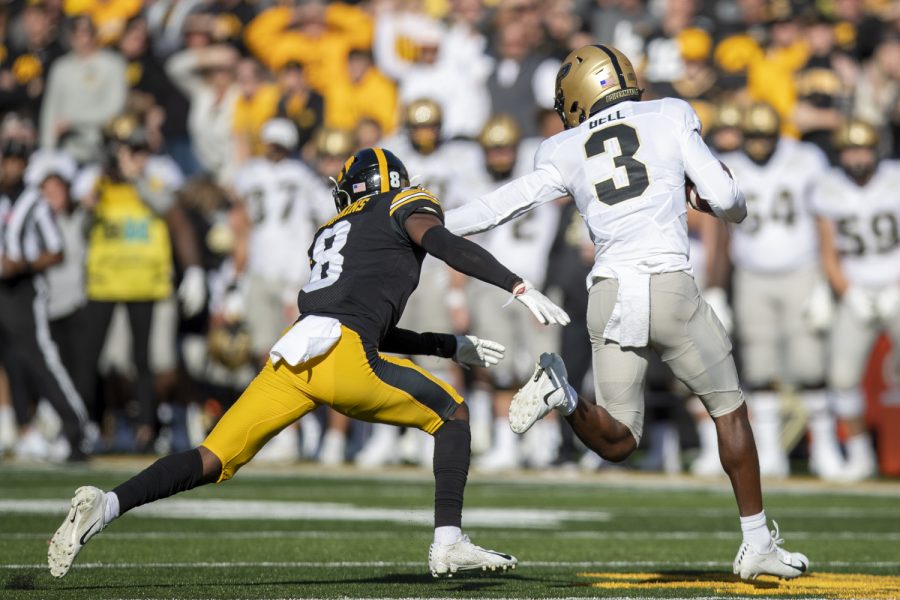 Purdue leads the No. 2 Iowa football team, 14-7, at halftime of their Week 7 matchup at Kinnick Stadium.

The Boilermakers took the lead on their second offensive drive of the game, when quarterback Aidan O’Connell ran into the end zone from six yards out. Iowa kicker Caleb Shudak missed a field goal on the next drive to keep the deficit to seven points. After Purdue missed a field goal of its own, Iowa put together a nine-play, 80-yard dive that ended in a three-yard rushing touchdown from running back Ivory Kelly-Martin.

Purdue took the lead back with 19 seconds remaining in the half on a three-yard touchdown pass from O’Connell to TJ Sheffield on a pick play near the end zone. Daily Iowan Pregame Editor Robert Read and Football Reporter Chris Werner are in the press box at Kinnick Stadium covering the game. Here are their reactions to the first half.

So much for stopping Purdue’s passing game this time around.

O’Connell has thrown for 189 yards and a touchdown, while running for another one, through two quarters of play. Purdue wide receiver David Bell already has five catches for 101 yards in the first half as he continues to burn Iowa’s defensive backs. The junior has 419 receiving yards in 2.5 career games against Iowa.

The Hawkeyes are without starting cornerback Riley Moss (who leads the nation with four interceptions), and were without their other starting cornerback Matt Hankins for a couple plays in the second quarter. Hankins went to the locker room with an upper-body injury after he tried to dive and tackle Bell on a 60-yard play.

Jermari Harris and Terry Roberts were in at cornerback for Iowa the rest of the drive, but Hankins eventually returned to the field. Still, that hasn’t done much to help. Purdue has played three quarterbacks in the first half, and all of them have done their part in hurting the Hawkeyes in the air and on the ground.

Phil Parker is perhaps the best defensive coordinator in the country. It’s time for him to solve Iowa’s Purdue problem. Otherwise, Iowa could go from having lost three of its last four against Purdue to four of its last five.

Iowa’s offense has looked a lot better during the first 30 minutes of today’s game than it did in the first half against Penn State. While Spencer Petras has had an up-and-down half throwing the ball, the Iowa rushing game has been reliable.

Iowa backs Tyler Goodson and Ivory Kelly-Martin have each contributed on the ground. Goodson has accumulated 64 yards on 10 carries and Kelly-Martin has totaled 23 yards on six attempts.

Kelly-Martin scored Iowa’s lone touchdown of the half, finding the end zone from three yards out. The touchdown was Kelly-Martin’s first since 2018.

The Hawkeyes have rushed for more yards than they have passed for, totaling 94 yards on the ground and 93 through the air.

Kelly-Martin and Goodson have combined to average 5.9 yards-per-carry over the first 30 minutes of play.

Goodson has found space on multiple occasions scampering for large gains throughout the first half today including a long of 32 yards.  The steady rushing performance comes despite the absence of guard Cody Ince who is out with an injury. Connor Colby started in his place.