High demand for football tickets coming off a restricted 2020 season has created an active ticket resale market for students at the University of Iowa. 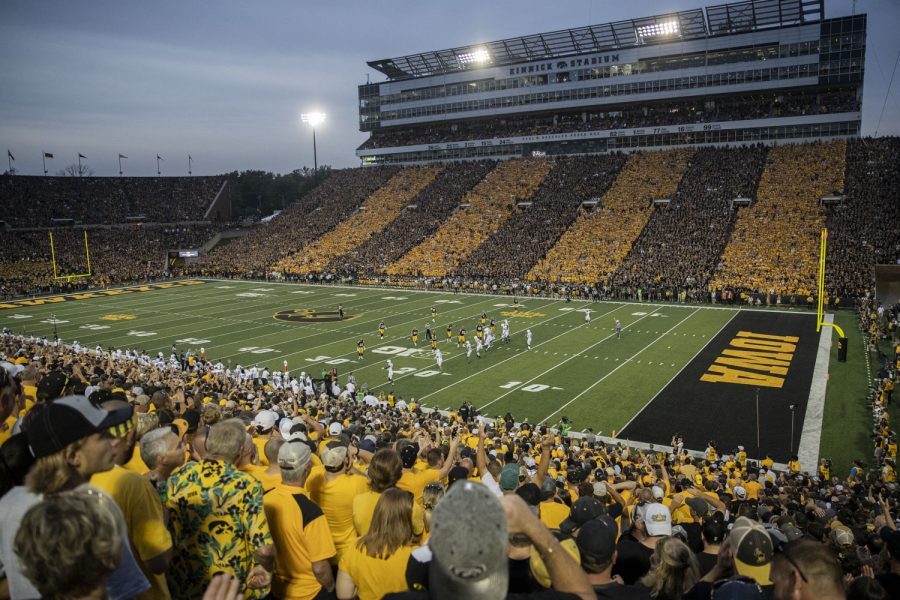 Kinnick stadium is seen during a football game between No. 3 Iowa and No. 4 Penn State on Saturday, Oct. 9, 2021. The Hawkeyes defeated the Nittany Lions 23-20.

University of Iowa students are seeking to resell and buy football tickets on social media as sales climb coming off a 6-0 Hawkeyes win streak.

UI class Facebook groups, such as the University of Iowa Class of 2022 and 2023, are littered with ticket resale offers.

Sam Premak, a UI second-year student, said he sold his Penn State ticket for $175, $25 more than the total price of student tickets for the entire season.

Premak said he made the decision to sell when his aunt offered him a ticket that would get him a better seat for the game.

“It was pretty easy to get them sold,” he said.

Demand for tickets has been especially high this year after the 2020 season, which had restricted seating, she said.

Crossett, who has been working in the Iowa ticket office for five years said that in past years, student tickets would usually sell out in early- to mid-August. In 2021 student tickets sold out by July 19.

With the influx of tickets being resold, there has also been an increase in the number of scammers.

Bryan Goosmann, former UI and current University of Colorado Denver student, said he remains in the UI Class of 2023 Facebook group, where ticket transactions among students are common.

Despite being well over 1,000 miles away, Goosmann still didn’t hesitate to help out his former classmates, posting, “Please be aware of ticket scammers. Any new joiners to the Class of 2023 group that updated their profile picture very recently are compromised accounts.”

Goosmann said people had been complaining about the account ripping them off. He added that on the surface, the account looked trustworthy, but when he looked deeper, he found that wasn’t the case.  He said the account had just joined the group and the profile picture had been uploaded a day ago.

Goosmann attempted to report the account, only for Facebook to respond saying the profile did not violate any community standards.

After noticing the allegedly fraudulent account, Goosmann opted to look further to see if there were any other scam accounts.  In doing so, he found that over 20 new accounts had joined the page on Oct. 4 alone, many of which were already attempting to sell tickets.

“There’s always someone out there looking to make a dollar,” she said. “Anybody who is looking to get a student ticket from someone else should insist on getting it electronically transferred to them through their student ticket account.”