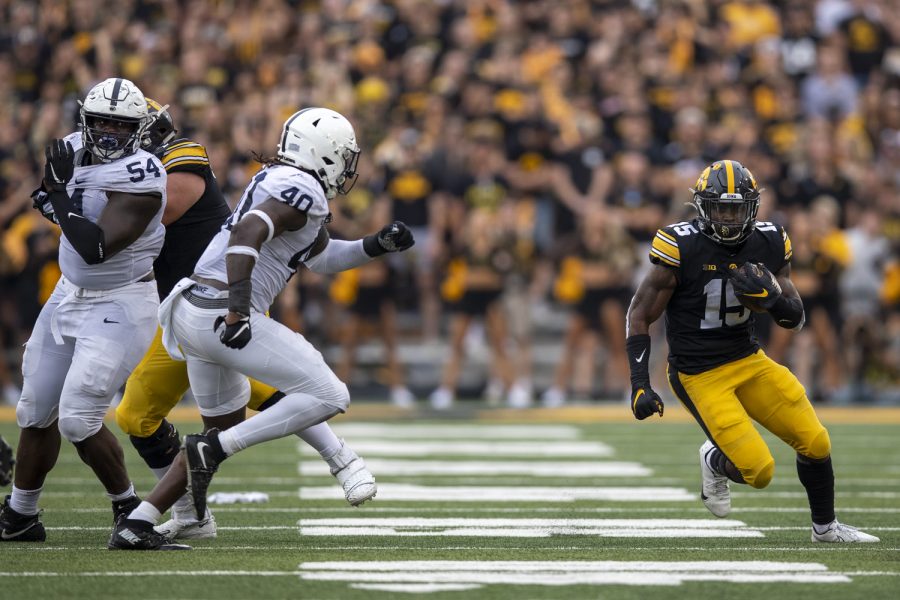 Iowa running back Tyler Goodson finds a hole during a football game between No. 3 Iowa and No. 4 Penn State at Kinnick Stadium on Saturday, Oct. 9, 2021. The Hawkeyes defeated the Nittany Lions 23-20. (Jerod Ringwald/The Daily Iowan)

Running back Tyler Goodson has been the Hawkeyes’ motor on offense for the first six games of the season. The fans and media predicted he would have to produce for the Iowa offense to function and he has done just that.

Goodson has been the steady, reliable back the Hawkeyes needed during the six-game gauntlet that included three ranked opponents.

Over arguably the toughest early-season schedule of any Big Ten team, Goodson’s 518 yards rank fifth in the conference.

The junior from Suwanee, Georgia, has shown an ability to evade would-be tacklers with smooth jukes. He also a willingness to run through contact that will only make him more difficult to bring down as the Hawkeyes forge further on in their quest for the Big Ten title.

The featured back has also improved in the passing game, reeling in 11 throws for 162 yards, averaging nearly 12 yards a catch. Goodson has become a good check-down option for Hawkeye quarter Spencer Petras. Goodson has become a dynamic offensive weapon both out of the backfield and catching the ball.

Goodson has five rushing touchdowns and one receiving touchdown this year. The preseason first-team All-Big Ten honoree had a career outing on Sept. 18 against Kent State, rumbling for three scores and 153 yards on the ground.

Iowa has played sound, complementary football so far this season both as a team and as an offense, blending the run and the pass well enough to have a perfect record through six weeks.

Simply put, if Goodson is not in the Black and Gold, the Hawkeyes are not the second-ranked team in the country. I rest my case.