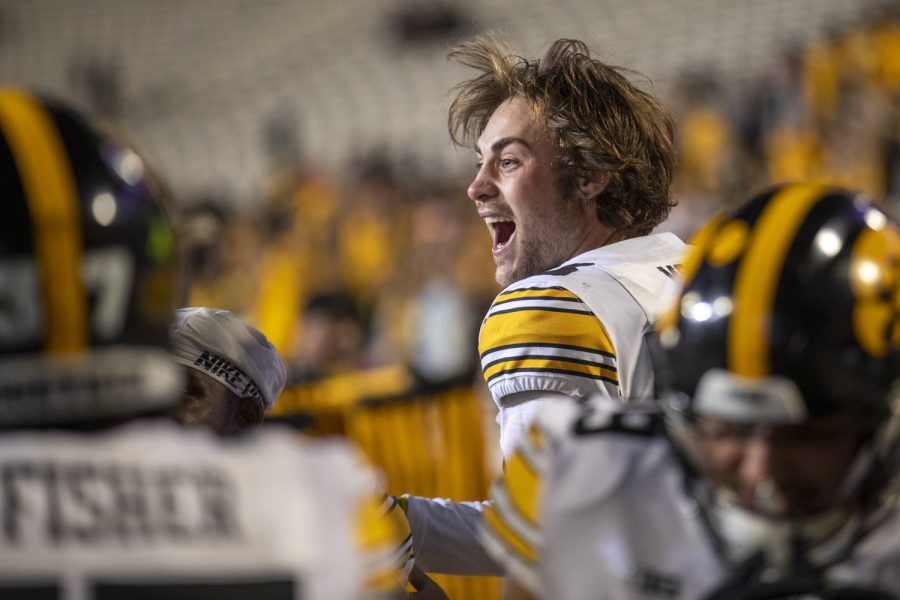 Iowa defensive back Riley Moss celebrates an interception on the sideline during a football game between Iowa and Maryland at Maryland Stadium on Friday, Oct. 1, 2021. Moss finished the day with an interception and finished with a team high five tackles. The Hawkeyes defeated the Terrapins 51-14.

Who knows where the Hawkeye secondary would be without Riley Moss?

Well, they’re going to have to find out Saturday.

The senior cornerback has been the Hawkeyes’ most valuable player through six games.. As part of the secondary and its newly coined nickname — “the doughboys” — Moss leads Iowa with four interceptions. Iowa has picked off 16 passes this season — tops in the nation.

Moss returned two of those picks for touchdowns en route to the Hawkeyes’ 34-6 victory over the then-No. 17 Hoosiers in Iowa’s season-opener against Indiana Sept. 4.

The cornerback ranks second on the Hawkeyes with three pass breakups and has registered 23 total tackles — including 21 solo.

But Moss might not have a chance to pad his stats in the Black and Gold anytime soon.

After grabbing an interception near the end of the second quarter against Penn State Saturday, Moss jumped up to celebrate with his defense. But he fell back down on the field and was helped off with assistance from trainers.

Now, Moss is not listed on Iowa’s current depth chart against Purdue.  Junior cornerback Terry Roberts will join starter Matt Hankins in the defensive backfield as Moss recovers from his injury.

Moss has been the anchor for Iowa’s secondary so far this season. But the Hawkeyes will need to muster up a way to defend opposing passers without Moss for at least this week — maybe longer.