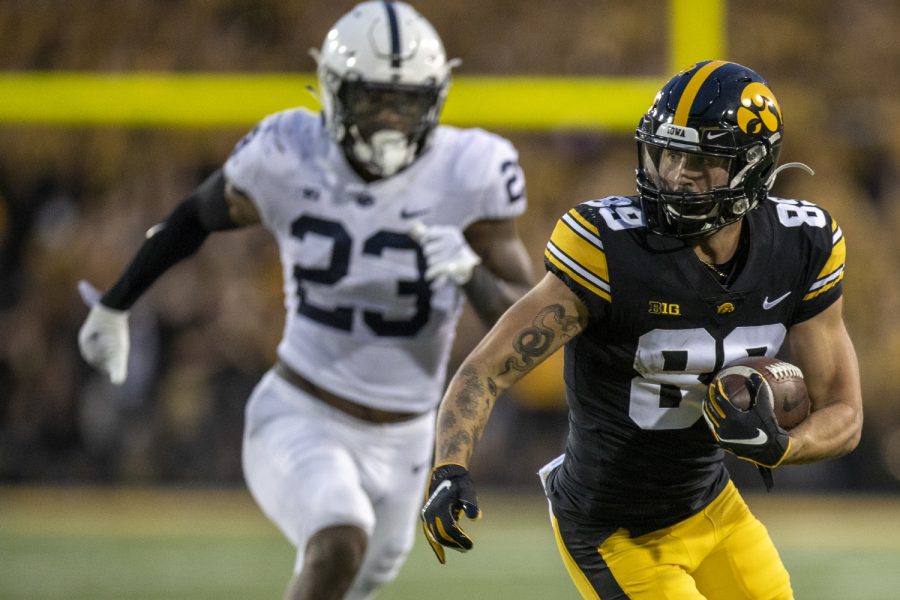 Iowa wide receiver Nico Ragaini runs downfield after catching a pass during a football game between No. 3 Iowa and No. 4 Penn State at Kinnick Stadium on Saturday, Oct. 9, 2021. The Hawkeyes defeated the Nittany Lions 23-20. (Jerod Ringwald/The Daily Iowan)

The Daily Iowan: What is the best feeling in football?

Nico Ragaini: There’s a couple of great feelings. Pulling up in front of Kinnick when you get off the bus, like all the fans being there and your family being there screaming you on is a great feeling. The swarm is definitely an absurd feeling, after the game when the whole team is in the locker room singing the fight song together that’s awesome feeling after we won a big game.

DI: You were talking about your prep school and all those guys going Division I, who is the best player you’ve played against?

Ragaini: Who’s the best player I’ve played against? The best player I ever played against,  when I was like a freshman in high school, there was this kid named Erv Phillips who played in our rival high school. He played for the Buccaneers for a little bit and went to Syracuse. He was like the best player that I’ve ever seen with my eyes face-to-face, like I’ve never seen someone play that good before in my whole entire life. He was a running back and wide receiver, I think played wide receiver for the Buccaneers.

DI: Who is the most famous person in your phone contacts?

Ragaini: The most famous person in my phone contacts? Kirk Ferentz.

DI: That’s a great answer, fantastic answer. You talked about your journey to Iowa with the prep school and everything. Did you have a welcome to Iowa moment when you got here or later down the road when you were like, ‘Wow, this is Big Ten football?’

Ragaini: I mean, just seeing the whole football facility and everything like that was just like, extremely crazy and my parents dropped me off and I was really out here living alone, like in the middle of the country by myself, which was definitely a welcome to Iowa moment.

DI: And what is your best and worst football play of your career?

[This interview was conducted before Ragaini’s game-winning touchdown reception against Penn State].

Ragaini: My best one was probably the catch last weekend. And my worst one, one that I wish I could switch is the Nebraska catch. Even though some people think it was a catch, I wish I held on to it for longer and handed it to the ref so there was no possible way they could really change the call. That one still bothers me.

DI: What’s the difference between Iowa corn and Nebraska corn?

DI: Who is your biggest role model?

Ragaini: My biggest role model? Definitely my dad. My dad played college baseball and he always told me he wasn’t the most talented, but he worked the hardest and that definitely instilled something in me. I mean, coming out of high school I had like no offers, and I wasn’t a big recruit, so just working for everything that I have.

DI: Do you have a go-to joke if someone’s like, ‘Anyone got jokes?’ Do you have one you go to, that you can say on the record?

Ragaini: Definitely not. Our receiver room has some funny jokes, but they’re all inappropriate so I don’t think that I should share them.

DI: What’s one musician that gets too much hype, and one that doesn’t get enough?

DI: Anybody who you think is overhyped that shouldn’t be as popular as they are?

Ragaini: Anyone big in country I don’t like country music at all so all that music is overhyped,

DI: Tyler Childers, I know he’s big, you don’t like him?

Ragaini: No. Spencer [Petras] has played some songs for me that I did end up liking. But country isn’t my style.

DI: Do you have a favorite Iowa football moment? I know you talked about your catch, is there anything besides that, maybe just like a team play or something else? Not necessarily that you did. If you think like Iowa football, what’s the moment that you go to?

Ragaini: I don’t know. Hopefully, it comes this year.

DI: Are you one that watches like NFL highlights for inspiration, some of those receivers? Do you have one that you go that you can’t get enough of?

Ragaini: I watch a lot of Keenan Allen. I think he runs the best routes in the NFL, so I usually watch his highlights on Friday night, like, go to bed. Try to visualize myself doing the same.

Ragaini: I don’t really know. I’m not a big movie guy. I’ve never been a big movie guy, so I’ve been starting to watch movies with all my roommates and stuff like that. They watch the Avengers and all those movies, so I just started watching those. But I’m not really big into movies. My favorite food?  I really like Ramen. I eat a lot of Ramen noodles. That’s it though. I try and eat really healthy. And then like, once a week, me and Spencer go and get ice cream because I could eat like a whole gallon of ice cream if it was sitting in front of me.

DI: Do you go to Estela’s to support Spencer’s N.I.L. deal?

Ragaini: Oh yeah.  Spencer’s got a little gift card so we all go, and he buys us lunch. Usually, every week we have class together on Tuesday and Thursday and then we’ll all go get Estela’s after it.

DI: OK, cool, and TV show. Do you have one that you go to that you love to watch just like when you’re bored?

Ragaini: A song I listen to when I get sad? This is a great song actually, it’s “Stay” by Rihanna. That is a good song. I’ll probably tear up a little bit.

DI: We’re compiling a playlist of the sad songs on the team so that’ll be a great addition. And  last question, do you have a best question and worst question you’ve ever been asked by the media?

Ragaini: Best question and a worst question? I don’t know, one time when I scored a touchdown against Minnesota, two years ago. I don’t know what question they asked me but I said I didn’t always run the route really hard and then I got yelled at by the coaches for saying something stupid, so whatever question that was. He set me up. That was the worst question I was asked,

DI: Awesome. Best question or are they all good?

Ragaini: They’re all good questions. I like when they ask me questions not about football.