The Boilermakers held quarterback Spencer Petras to a 44.9 passer rating in 2020 in his first career start. 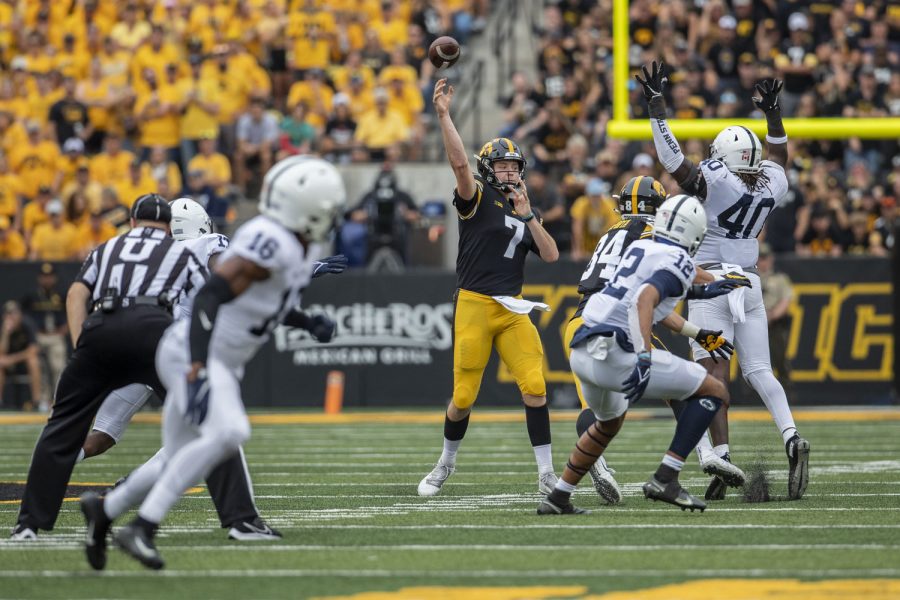 Iowa quarterback Spencer Petras passes the ball during a football game between No. 3 Iowa and No. 4 Penn State at Kinnick Stadium on Saturday, Oct. 9, 2021. The Hawkeyes defeated the Nittany Lions 23-20. (Grace Smith/The Daily Iowan)

The fundamentals. The monotonous.

“The next thing that’s going to be important are the fundamentals,” O’Keefe said at a Zoom meeting with reporters Wednesday. “You’ve got to work on those little things that, you know, are going to bore you to death. They’re going to be monotonous. As you perfect them, as you get better at them, execution and efficiency starts to push up.”

Iowa quarterback Spencer Petras has led the Hawkeyes to 12 straight wins and No. 2 ranking while under center since taking over in the 2020 season.

But Petras also has two close losses under his belt: Northwestern and Purdue. The Hawkeyes started 0-2 in the 2020 season before winning their final six games.

Now, with the Hawkeyes at 6-0 and No. 2 in the nation in 2021, the Boilermakers are coming to Kinnick Stadium this Saturday with a strong defensive front.

But O’Keefe is stressing consistency to his quarterback room as the Hawkeyes look to avenge their 2020 loss.

“You’ve got to have an even keel as you approach things,” O’Keefe said. “There are going to be big moments, and you can’t let them become big moments in your head or in your body. You just have to train as hard as you can during practice, and the offseason or whatever it may be, so when those moments show up, you just automatically play to the level of your training.”

Petras takes the vast majority of reps at practice as the Hawkeyes’ experienced starter. While backup quarterback Alex Padilla usually watches from the sidelines, O’Keefe holds Padilla to the same standards as Petras.

RELATED: Iowa football climbs to No. 2 in Week 7 AP Poll

The Boilermakers held Petras, in his first career start, to 265 passing yards and no touchdowns. Petras completed 22 of his 39 pass attempts, with a 6.8-yard average.

“They have an outstanding defense, with a veteran and experienced defensive staff,” O’Keefe said. “They’re playing great football, at this point in time. It’s a defense that when you look at them, you don’t see any real weaknesses.”

“This defense is probably the best they’ve ever had,” O’Keefe added. “A great pass rush, outside and inside. They’ve got a very good linebacking corps that plays extremely hard, and their secondary has done an outstanding job as well. This is an extremely good defense… they’re going to try and put pressure on our quarterback, running around the edges and things like that.”

Petras and the No. 2 Hawkeyes will take on Purdue on Saturday at 2:30 p.m. in Kinnick Stadium. The game will be aired on ABC.