The Hawkeyes are looking to bounce back after losing their two previous conference matches. 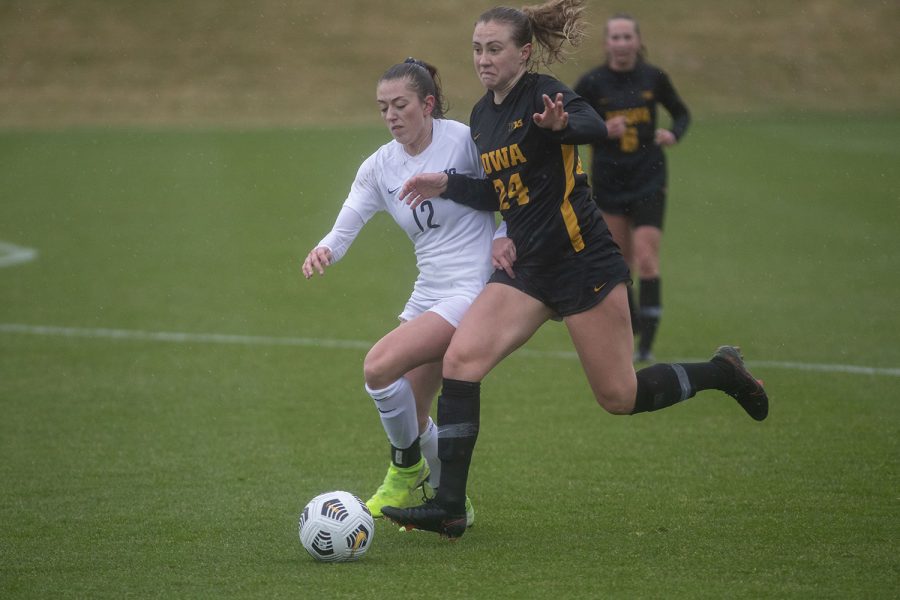 Iowa soccer is keeping an upbeat mentality heading into a two-game weekend, despite losing its last two matches and falling to 2-4 in the Big Ten Conference standings

But after playing five of the top six teams in the Big Ten Conference standings, the Hawkeyes could have an easier time against their next two opponents.

Iowa will take on Nebraska and Illinois this weekend in Lincoln and Iowa City, respectively.

Illinois will play at Minnesota Thursday night before heading to Iowa.

The ninth-place Hawkeyes know they still have a chance to qualify for the eight-team Big Ten Tournament. Iowa currently has six points in the conference.

“Every opportunity we have to play soccer is an opportunity to get a win and hopefully solidify our spot,” senior defender Sara Wheaton said. “So, just going out every chance that we get and giving our hardest and doing what we need to do to win the next game.”

Iowa head coach Dave DiIanni said the Hawkeyes’ practice on Wednesday was the best they’ve had all week, as the players were energetic, enthusiastic, and willing to learn.

DiIanni also said he was impressed with how the Hawkeyes’ finished offensive attacks — something Iowa has struggled with this season.

The Hawkeyes have dealt with injuries throughout 2021. They haven’t had senior forwards Skylar Alward or Jenny Cape available the entire season, and senior defender Olivia Hellweg also sustained an injury Sept. 26 at Purdue that will keep her out for the remainder of the 2021 campaign.

Schueller’s soccer IQ stands out to DiIanni — who said her knowledge for the game at her age is at a high level. Despite switches in formations in the past matches, Schueller has been very comfortable with the changes.

“She loves the game, and she’s a player that only wants to get better and is learning what it takes to get better at this level,” DiIanni said. “Especially at the young age as a freshman. So, I think she does fantastic, and I expect her to have a great future.”

Iowa will play at Nebraska on Thursday at 7:05 p.m. After playing in Lincoln, the Hawkeyes will return to Iowa City for a match against Illinois on Sunday at 1 p.m.

The Hawkeyes will finish up their regular season with a home match against Minnesota on Oct. 21 and a contest against Wisconsin in Madison on Oct. 24. If the Hawkeyes qualify for the eight-team Big Ten Tournament, they will play in the quarterfinals starting Oct. 31.